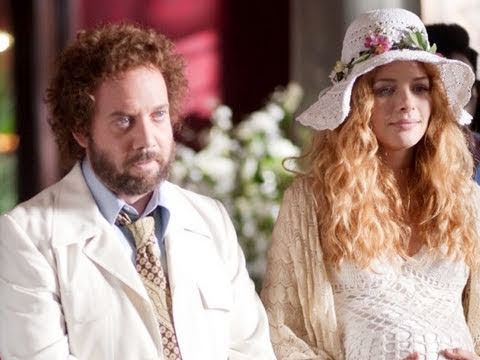 A story that seems to flow naturally and organically is a mark of good storytelling, managing to hide the inescapably tight three-act structure (opening, confrontation, and conclusion) to which screenwriters abide. I mention this because my viewing of Barney’s Version, a 2010 film by Richard J. Lewis, led to a reflection on the nature of storytelling. It is an instance of a promising film seamlessly executing its opening and closing acts, though the journey between the two is a flawed one.

In the film’s opening act, we are introduced to Barney (played by the ever-great Paul Giamatti), an aged, embittered television producer, who dogs his ex-wife’s husband with late-night abusive phone calls, while also dealing with accusations of murder accusations in a newly published book.

The setup here is great, with enough intrigue to attain my undivided attention, as the flashbacks began to shed light on how Barney got to this stage in his life, particularly concerning the murder accusations. The build-up to the supposed resolution of the murder at the film’s midway point, however, is hindered by the film’s initial pacing and Barney’s frustratingly unsympathetic character.

The issue of pacing in the film’s first half comes down to its depiction of Barney’s first two unsuccessful marriages, which feel more like superfluous scenes there only to build up to Barney meeting the true love of his life, Miriam (Rosamund Pike). Despite his occasional good deed, I found myself unable to care about these aspects of Barney’s life, mostly because we spend a great deal of time watching Barney meander from one relationship to another, generally acting like an inconsiderate jackass in the process.

Then, when it seems the murder mystery is resolved right in the middle of the film, I thought Lewis had sacrificed the only interesting plot thread left in the film. Instead, this turns out to be the film’s saving grace.

Without the lingering question of what occurred, or whodunit, the film then refocuses on the development of Barney and Miriam’s relationship/marriage, with the chemistry between Giamatti and Pike as its foundation.

Just as crucial though, the screenplay offers revelations I didn’t think I needed to know until it occurred. In turn, we gain a view of Barney’s story that is fleshed out, granting us greater insight into his older, embittered self, making him a far more sympathetic character by the film’s conclusion.

Thus, Barney’s Version is an example of a film that tries to be more than it is, succeeding only when it narrows its narrative crosshairs. The second half is as engrossing as the promise made by the film’s opening sequence, capitalising on the cleverly subtle plot threads hidden in plain sight. Despite Barney eventually earning my sympathy, it is a shame that it took me so long to come around, given the lingering bad taste left by Barney’s character in what sometimes feels like a needless first half. That being said, this is still a satisfyingly touching romantic comedy drama, whose intentions I ultimately admire.