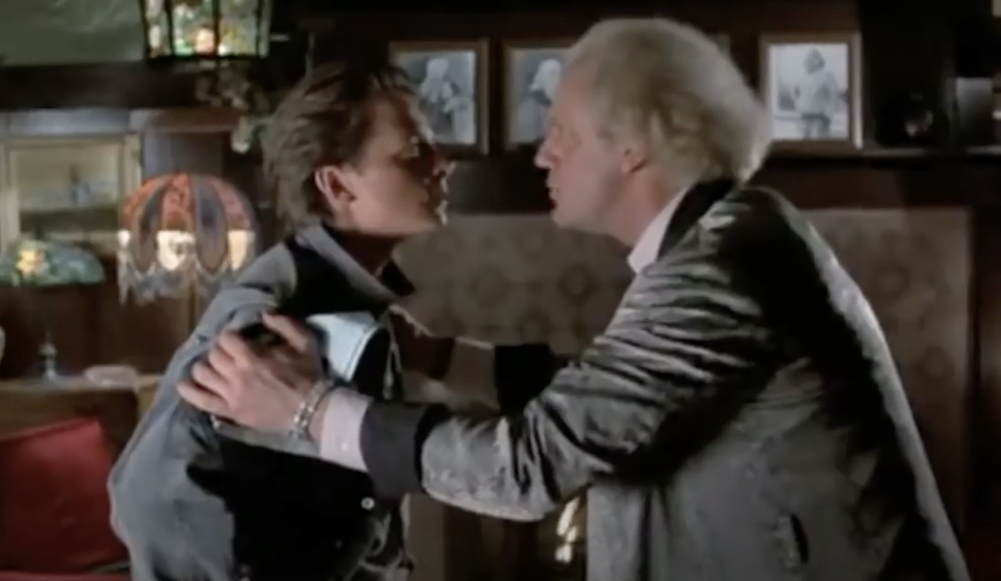 With its 35th anniversary having come and gone on July 3rd, there is no better time to revisit the bona fide classic that is Robert Zemeckis’ Back to the Future. A staple of ‘80s American cinema, the movie also propelled Alberta native Michael J. Fox to international fame, grossing $389.1 million US at the global box office, which, when adjusted for inflation, is a little over $927 million by today’s economic standards. A massive turnout from audiences paired with Back to the Future’s fresh, vibrantly youthful take on time travel instantly turned it into a pop culture phenomenon whose influence ripples to this very day.

I will very much be preaching to the choir with the praise I am about to heap on Back to the Future, as it is one of those movies that seemingly everybody has seen and love. It has an enduringly infallible reputation that is well-earned, to the point that few people require convincing. For that reason, look at this not as a typical review, but rather an open letter on what makes Back to the Future such a great genre movie.

For the few people who may not know what Back to the Future is about, it begins with a glimpse into the life of Marty McFly (Fox), a charismatic teenager with a dysfunctional family. With two deadbeat siblings, an alcoholic mother and a cowardly doormat for a father, Marty escapes his life at home by assisting eccentric scientist Dr. Emmett “Doc” Brown (Christopher Lloyd). On one particular night, Marty is surreptitiously instructed to meet the “Doc” at the empty parking lot of a shopping mall, who shows him the time machine he has created, famously made using a Delorean. However, when terrorists track and kill “Doc” Brown, Marty is forced to escape in the car-turned-time machine, which takes him back to 1955. Seemingly trapped thirty years in the past, Marty must seek the help of “Doc” Brown’s younger self, but not before meeting his now teenage parents and potentially altering their futures, as well as his own.

I often compare Back to the Future with Groundhog Day, in that they both boast ingenious premises for their time, and not only do they deliver on their potential and then some, but they make for instant classics that have only grown in stature over time. And much like Groundhog Day, the backbone of Back to the Future’s greatness comes down to two things: the screenplay and lead actors.

Zemeckis’ work in the director’s chair deserves immense praise also, but it is the screenplay he co-wrote with Bob Gale that is the key ingredient for this winning recipe. While their material is unafraid to go to dark places, with a dash of taboo for good measure, the screenplay is uncommonly tight for a feel-good commercial vehicle. Not a line of dialogue is wasted, particularly in its opening act, as every word and action is there to advance the plot or its characters, all the while Zemeckis and Gale pepper their work with devilishly clever references to events both past and present. It says a lot about the strength of a screenplay when a movie like this, which does not necessarily scream awards season, lands a nomination in the writing category, and deservedly so. Any budding screenwriter can learn a great deal from Back to the Future’s script.

Then there is Michael J. Fox and Christopher Lloyd, whose importance to the movie’s success cannot be overstated.

It is a well-known tale in film circles that Fox was not the first actor cast as Marty McFly, even though he had always been the first choice. Due to prior commitments with the hit TV show Family Ties, Fox was initially unable to work around the production’s schedule, so Eric Stoltz was cast in his stead. Several weeks of shooting and millions of dollars later, Zemeckis and producer Steven Spielberg realised that Stoltz, who they acknowledged is a fine actor, was simply not right for the role. Producers were later able to land Fox, shooting Marty’s scenes from scratch. This proved to be the right move, where Fox doesn’t so much perform the role of Marty McFly as he does embody it. The actor seamlessly navigates the strong script with punchy line-delivery, well-timed comedy, and the right level of dramatic heft, all of which combine to make Marty a standout hero of 20th century cinema.

Lloyd similarly embodies his role of “Doc” Brown, bringing a manic, eye-bulging kineticism that borders on caricature, though only ever dancing the line and never truly crossing it. Even at his most riskily meta, such as looking the viewers dead in the eye as he tells Marty he is going to send him “back to the future,” the “Doc” as a character, in both his creation and execution, is a wonderful twist on the mad scientist, leaving his own indelible mark upon modern pop culture. For proof, you need only watch Rick & Morty.

These core elements combine to make a movie that does not need a time machine to be timeless. Even the jokes that seem dated still land with smirk-inducing relevance, some 35 years later. Back to the Future weaves a tale about changing history, and in the process, became a part of history itself, rightfully recognised today as a juggernaut of pop culture, and one of the greatest science fiction movies ever made.