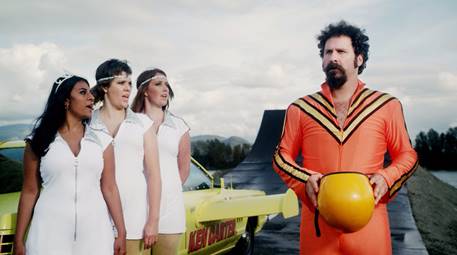 Looking for the Ultimate Statement. Ken Carter, World’s Greatest Daredevil. That’s what it’s all about. says Ken (Andrew McNee),  as he inspects his car ready to drive/jump from a ramp over the St. Lawrence Seaway into the States. The year is 1976.

Aim for the Roses goes further into the story of what would’ve been the world’s greatest jump. Cody Glove and Andrew Whitton explore the former daredevil’s track, which has long been destroyed, talking about how they wish they could’ve been at the track when the stunt would supposedly happen. Originally Ken was supposed to land in a large field of roses.

Another big Ken Carter fan was a composer named Mark Haney who came up with the concept of recording a Ken Carter tribute album made entirely for bass. And of course, the album was called Aim for the Roses, based off how the stunt should’ve ended. His album consists of a long track he calls the Pi-Line because every note is part of the number Pi (3.14) which eventually becomes the Ken Carter theme.

The album consists of more than just the sound of slow bass music, it also includes spoken dialogue repeating a lot of Ken Carter’s opinions and lifestyle philosophies as well as some of his newspaper ads for his jumps (sung by an announcer voice and two chorus members). The style of music added to fantastic and unique types of vocalists is what makes the album more creative.

Mark struggled greatly with trying to get his album sounding perfect. The documentary shows how making the album took almost as much time as preparations for making the jump. Even more entertaining is how there are so many interesting types of characterssinging in the album. Some of the music is a bit strange with the shifts in tempo and mood, causing some inconsistency within the years of work on the jump, but it still sounds humorous and very interesting.

Even though I’m not a music critic, I have to say Mark Haney did a great job on the album, and this documentary shows the effort he really used.