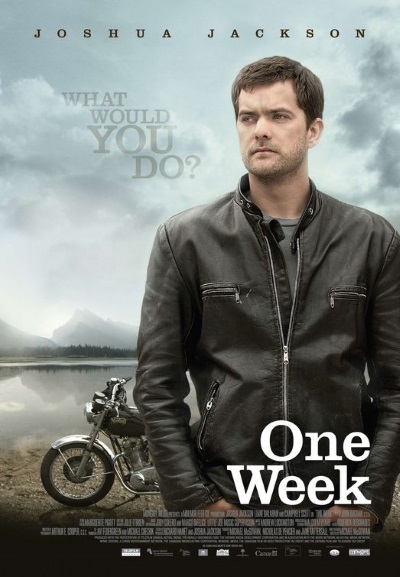 For National Canadian Film Day, I checked out the 2008 drama One Week (thanks to one-day free streaming at CBC.ca).

One Week is about an author named Ben Tyler (Joshua Jackson) as he goes on a quest around Canada to discover the meaning of life. The movie starts out with Ben getting a diagnosis from his doctor: he’s been found to have cancer. After hearing the news, he runs home frantically, stopping short when he meets a man with a motorcycle for sale.

Then there’s a flashback documenting Ben’s life-changing moments. These moments include Ben giving up daydreaming, singing, and writing. He ends up teaching kids at a private school even though it has no interest for him. Ben makes plans to marry his fiancée Samantha, though she’s  never liked motorcycles as she sees them as dangerous.

Back in the present day, Ben decides to take the motorcycle and go out on his own. The man happily lets him take it for a low price. Ben decides to tell Samantha that he needs an adventure before he gets the treatment for his cancer. As he goes on his journey, he remembers everything that happened in the past and tries to correct it in the present. He gets a chance to see the Stanley Cup up close, as well as some of Canada’s nicest landmarks, and meets interesting people while he travels all around BC.

This movie shows how inspiring a journey can become as one looks for help along the way. It wasn’t the most exciting to watch, but I enjoyed the documentary style of this flick.

One thought on “One Week: A Review”