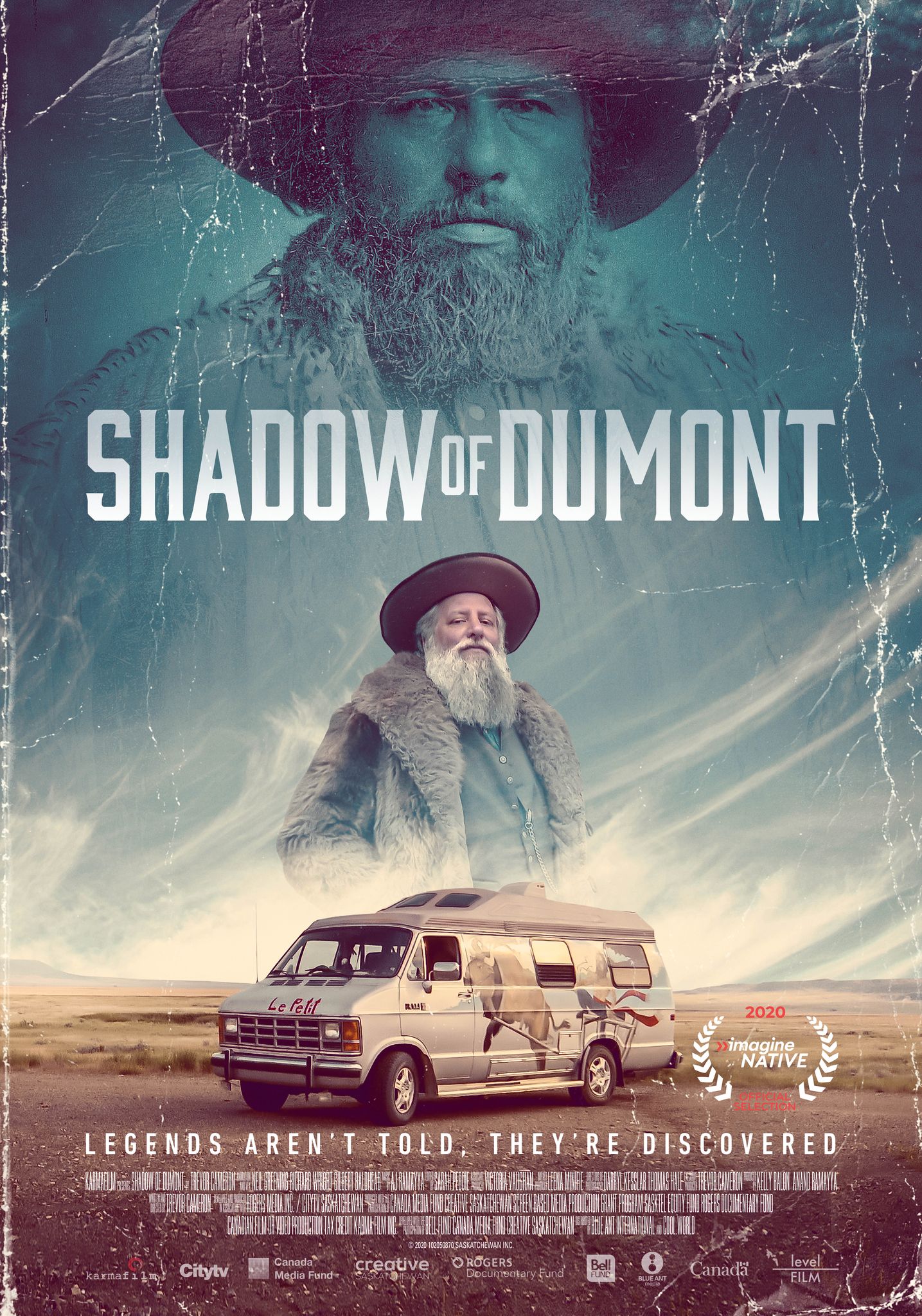 Have you wondered where your heritage traces back to? All I know is if I were to backtrack on some of mine I’d need a Russian translator. Of course, if some of what I’ve heard is true then voicing personal opinions has run in the family for generations. Anyways, Trevor Cameron has decided to learn more about his ancestor Gabriel Dumont, best known as the Metis Bravheart. Going on a long impressive road trip around Canada and then the United States, Trevor spoke to many people to learn more than any online source. So I spoke to Trevor and asked him what went into his journey of self-discovery and ancestral findings as he made Shadow of Dumont.

HNMAG: It must’ve been difficult working both on and off camera at times. How did you balance the two jobs out?

Trevor Cameron: That’s a really good question. During production, we were never off. Even during the driving sequences, we kept the camera going just in case so we ended up with a lot of extra footage. One of the ways I did it was to make sure when I didn’t want to be on camera I got out of costume. Doing that, it couldn’t be shot and couldn’t be used and it forced myself to concentrate on setups. We had a plan when we went in on how to film and we made sure and put down our sound early. We had our sound guy come in and mic people first for sound and then we went in because it was improv on a lot of sequences.

HNMAG: And how did you manage the improvising? I understand it can be tough sometimes when filming.

Trevor Cameron: It is tough at times. I did pre-write a script, but I didn’t know exactly who I was going to talk to. I made an agreement with myself that I’d accept the adventure no matter where it went and do my best. Improv is where I got my start so it was all about agreeing to the situation and allowing yourself to make mistakes and working your way around them.

HNMAG: What went into researching Gabriel Dumont? How did you decide where to go?

Trevor Cameron: Early off when I was doing my first round of research, I was working on a movie. I wanted to do a biography but once we were given this opportunity to shoot a documentary, I had already collected a lot of research. That’s when I realized what I needed to do was pick my dream places and develop a plan. For instance, I knew I had to go through a lot of the Great Plains, but I didn’t want to make it look like I was ping-ponging through Saskatchewan to Manitoba. So the challenge was weighing with the direction that I could drive. It was an interesting choice because originally I had planned to start in Saskatchewan and then just head into the States, then loop back through Northeast back to Winnipeg and kind of do stuff in a circle. When just before production, we discovered it might be more advantageous to go the opposite for storytelling. Start in Saskatchewan, go through Winnipeg, and then sort of go clockwise through the States then go back up. Because the story of Dumont, he did not go in a straight line, he went all over the place and there was no real way to do it chronologically so we had to choose our own way. That actually informed us of my search for legacy. Once I decided instead of just telling a straight story about him, I decided to take a look at his legacy and how it reflects to how I feel. It became an easier way to tell the story because I was no longer holed into history.

HNMAG: How long was the shoot for?

HNMAG: Was there anything about Dumont that surprised you when did your research?

Trevor Cameron: Oh, YEAH. A lot of cool things that surprised me. The big one for me was realizing just how much time he spent in the US. He kind of spent half of his life there. He lived in Montana for a few years. Here in Canada, our history really focuses on Dumont as it relates to the Metis uprising in 1885. He settled into a lot of places as a kid, and then the buffalo hunting took him into the South. I learned a LOT about him, how he’s still known in the US, there’s archival pieces of his clothing and his history, and I found that really intriguing. HNMAG: So your discoveries may have been more different from what other people found?

Trevor Cameron: When I was doing my early research, I learned that his snowshoes are in North Dakota. They were purchased in the early 1900s, as a note of people who were in North Dakota, so they acquired his snowshoes. I had seen pictures of them, and put it on my list to go see them. There I met the archivist and we had this great conversation. We talked about the snowshoes and then he had mentioned in his research they had some winter coats from the Metis in storage. One of them is attributed to Gabriel Dumont but they don’t know which one. I would’ve never known about that if I relied on my Internet research or newspaper research. There’s all these little bits and bobs I found on the trip that are always surprising.

HNMAG: How did it go conducting interviews with the subjects? Who did you know who to talk to?

Trevor Cameron: A lot of the times, I had a researcher with me who had done her dissertation on Gabriel Dumont and we relied on some of her notes. I had also gone doing my early research throughout Winnipeg or Manitoba and I had met a couple elders there. It was kind of one of those ‘snowball’ things where I track down a person and they’d say “You know who you need to talk to is THIS person” and I’d cold-call them saying “Hey, I’m coming over in my van, with a camera crew. I’d like to talk to you about Gabriel Dumont.” and it was all off of hard work, getting as much as we could off one person and then bouncing from there.

HNMAG: How did the film get pitched?

Trevor Cameron: So I actually had this idea when I was working on a stop-motion show. I really decided I wanted to do a Gabriel Dumont story, and I imagined how hard it would be to write the story, get the languages, and find the actor. It would be so hard to populate, but it would be neat. But then after doing a whole season of stop-motion I thought, “Why don’t I animate it?” because then I don’t have to really worry about casting and have actors phonetically learn languages. I don’t have to slavishly match the actor to the look because I can create the characters themselves. So, I had this plan of doing this feature length or mini-series epic story that was animated about Gabriel Dumont and I brought it to pitch at the CBC. They liked it, so they let me develop it to see if I could make it into a mini-series. While I was doing that, and waiting to hear back from CBC, we were pitching to all these other broadcasters. One of my producers mentioned to City-TV Saskatchewan and they were interested in letting it in. They didn’t have money to do big series but they always wanted to have a documentary. So my producer came back and asked if this show could be a documentary. I said “Well, no… But we have all this research and I’ve got all these leads so we could definitely make a documentary.“ So we re-approached City-TV with a completely different angle saying “you want a documentary, we can do a documentary.” but I didn’t want to do a boring documentary, I wanted to do something that would engage me. Something that I would enjoy doing and something that wouldn’t just get thrown into the pile of 1-hour geographic docs that are just b&w photos with somebody reading a script. That was the brainchild of where the documentary came from.

HNMAG: What kind of camera and equipment got used?

Trevor Cameron: I know that we used a lot of different cameras. We went through a few DOP’s from research to the final result and there wasn’t just one camera. Our B-camera was a black magic, we had a couple go-pros that we could attach to the side of the van for driving shots. I can’t remember our main camera, but it wasn’t tape, as we were constantly backing up footage onto hard drives.

HNMAG: How is the outreach looking for Shadow of Dumont? Has it got a lot of positive feedback?

Trevor Cameron: Oh, yeah. We kind of had an early screening, a thank-you screening that went over really well. We entered it into Imaginative, in fact it was one of the official selections. Originally City-TV was our broadcaster, but now they’ve opened it across CTV Canada so if you have an on-demand setting and CTV in your line-up, you should be able to find it now.

A great film about a great journey making great discoveries about a great man, Shadow of Dumont will take you on a journey that teaches you so much you never knew. Maybe someday I’ll take a journey to discover more about my ancestors. But I have to figure out which side first…