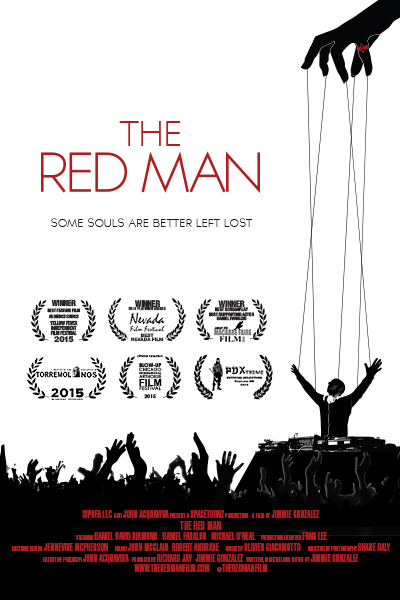 A number of weeks ago I reviewed The Red Man, the debut feature film by writer and director Jimmie Gonzalez, a surrealist mystery film, depicting the apparent mental decline of a successful DJ who believes he is uncovering a conspiracy involving ritualistic practices. I fortunately had the chance to catch up with Canadian DJ and entrepreneur, John Acquaviva, who served as executive producer of the film. Mr. Acquaviva offered his own insights on the film, as well as shedding light on the exhaustive-but-rewarding nature of the industry. Director Jimmie Gonzalez was also kind enough to offer a few closing words:

John – When I take a moment to gauge at my career at this stage, it has been a rather satisfying one in that things have turned out pretty well, but not for the lack of challenges and pushing the limits on many a front. I can tell you straight up that Starting Plus 8 records with Richie Hawton was a non-calculated edge of your seat affair those early years. This film explores an artist’s life, in retrospect, having redlined while in fifth gear on two wheels and finally crashing and wiping out because of never coming to grips with his choices along the way. For me, selling your soul to the devil is simply a metaphor for having made the wrong decisions I also have to add. Clearly this story is about one that did not make it.

John – This is my first feature film and I don’t count the many videos we’ve participated in at all sorts of ways in the music field as anything close to it.  As an entrepreneur I have had friends invest in films and they kept telling me doing a movie is like doing a festival or a rave. Get some big names and market around it, raise money while you throw names around and hope you sign them. So I never wanted to do a deal for the sake of trying to throw a rave or festival as that is not what is paramount to me. However, having known Jimmie for well over 10 years, I had seen him cut his teeth on some fantastic video work and shoots, so when said he had fleshed out his movie idea into a pre-trailer to drum up interest, I hopped on a plane to see first-hand. The story intrigued me and that is the main thing. It was not about an all-star cast and other bells and whistles but a simple and frank look at the dark side of a career gone wrong. With additional viewing and attention also allegorical in so many ways to all of the issues we have to deal with in our world. After that screening, I told him I was there to help make it a reality for the art that it could be (and I believe has become) first and foremost.

John – Jimmie will go into lots of depth, but in a quick sentence from me, giallo films and early Kubrick and Polansky…The Apartment comes to mind. Also, at one of the festivals we screened at they showed The Cabinet of Dr. Caligari, and it was clearly an influence with respect to its genre and macabre message.

John – Absolutely—it could have been me, I have seen this and that in so many people I  know. The lack of sleep, getting off balance, and the paranoia to the point of losing trust and faith. I will let the movie be a metaphor for many names that you, and the reader, can try to fill in the blanks with as well.

John – I did not make the film per se. I have been an integral part of many creative ventures, but sometimes I am that guy who stands back and is that voice to bounce off of. Jimmie had a genius vision and story and I bought into that. I was strictly there for support when needed. All that said, I was there for a week of filming and it was exhilarating and exhausting from a physical to mental spectrum in the very best of ways. Many movies have gone awry much like the protagonist in our movie, and our crew did not crack, but rather rose to the occasion.

John – Also, like Jimmie, it was Olivier that did the whole movie, with Jimmie commenting along the way. It was so intense that Olivier at one point was exhausted and hospitalized. It was the first film ever using the Subpac, where the low end is a visceral experience. Imagine creating that dark moody music while watching many a grim dark moment over and over as well as feeling it through your body. Really a draining experience.

John – Film festivals really are a lot like movie festivals. We did a lot of smaller ones, but that was perfect for us because we did not have a packaged cookie cutter movie and crazy marketing spend. Rather, we hit the ground to meet underground and alternative people playing to houses of 30 to just over 300, then doing Q&A and hanging with fans. We mostly kindred spirits to understand what the take was, as well as hear how other people distributed and managed such endeavours. Although not officially chose at Cannes, we did screen there and that was a highlight since I have always thought of Cannes to be more encompassing creative and intellectual festival and not just pop culture films. So Cannes for the personal significance but I think Belfast as Jimmie and his wife Donna and a few friends flew down to celebrate. We won best screen plan and crowd favourite, and we had a real blast in Belfast.

Jimmie – I agree on Belfast, especially being our world premiere, and to be able to share it with my wife and closest friends. The team at the Yellow Fever Independent Film Festival literally rolled out the red carpet with true independent spirit. Another was our east coast premiere at the Macabre Faire Film Festival in New York. It was a pure manifesting payoff. I envisioned being at a festival of its modest caliber ever since my pen first hit the paper, and to win best screenplay was just mind blowing.

John – I never know what I am doing but won’t say no. I have made many more friends in the movie scene and Jimmie and I are looking and talking on next projects. None in Canada yet, but again, who knows!

Jimmie – Another great connection I’ve made was with the great film community in Vancouver, where we screened at Cinemafantastique Film Festival this past summer. So much so that I look forward to collaborating on future projects with some of the great talent, crews and incentives the city offers. We’re also looking to keep the ball rolling by helping other filmmakers see their ideas through. As I see myself as producer rather than just a writer director, I’m interested in expressing that in more ways than one.

Check out the Trailer here