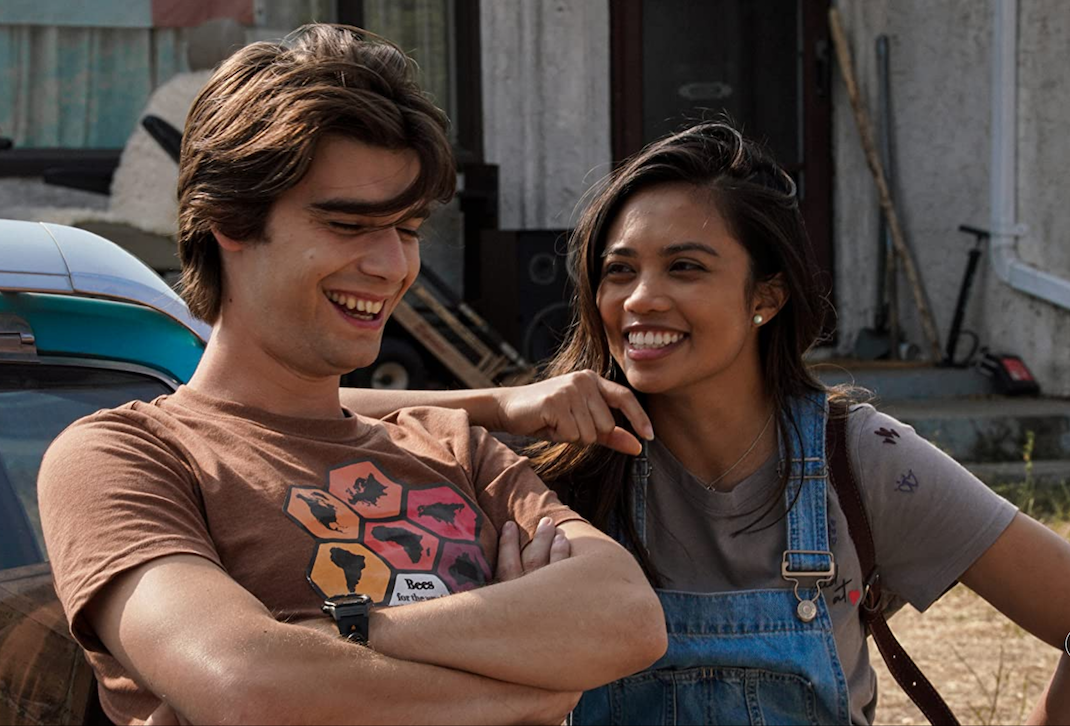 The Whistler Film Festival is the Bermuda triangle for talent. You cannot bypass this festival if you are rich in talent and this year has delivered their finest truffles. Stars to Watch creates a list of standout talent every year and Daniel Doheny along with Louriza Tronco are on it for their stellar performances in the Award-winning film, Drinkwater! I was just informed that the film won the Audience Award for most popular film at the festival! I have seen this tremendous film and I would agree that it has all the ingredients of a classic comedy with a heart-warming message. I can feel the love in the theatre.

Written by Luke Fraser and Edward McDonald, it was directed by Stephen S. Campanelli. This film is so Canadian, including a subplot about a Wayne Gretzky rookie card. It’s a beautiful film that explores young love, loyalties, sacrifice and a father/son bond that is transformed from a pasta state, to one that is unbreakable. It’s charming, engaging, funny and pokes fun at our Canadian culture. It’s not easy to be Canadian but this film makes it look easy and attractive enough to cause a mass migration, so be prepared. DRINKWATER features Canadian actor Eric McCormack (Will & Grace, Travelers, Perception), who received the WFF Trailblazer Award, and stars Daniel Doheny (The Package, Alex Strangelove, Adventures in Public School) and Louriza Tronco (The Order, Make it Pop, Night At the Museum)

I was extremely fortunate enough to speak with 2 of the Stars to Watch from this film. Louriza Tronco and Daniel Doheny joined me from their homes in Vancouver and it was a thrill to hear all about their experience in this very Canadian film. Roll the tape!

LOURIZA “I think it’s important. There are a lot of films out there with great actors but if they don’t connect, in a role where they’re playing friends or love interests, it can throw things off. I liked working with Daniel, so I hope that came through.”

DANIEL “We had a good time together and I think chemistry is really important. I think everyone on set had really good chemistry. If you have 2 great actors that don’t have great chemistry but still have good performances and you can’t tell, I think it can still be a detriment to the movie. When people are getting along, it raises the spirits of everyone around them. People are happy about the process/happy to come to work with their friends.”

HNMAG  “Louriza, you play best friends with Daniel but he likes another girl. Have you ever been in a situation/predicament like this before?”

LOURIZA “I’m pretty sure that it was most of my elementary experience. His name was Andrew and he really liked Pokemon tattoos, so I tried to get his attention by giving him Pokemon tattoos… and he never paid attention to me.”

HNMAG “Now, I know that Louriza has trained in acting in Victoria; did you also train as an actor, Daniel?”

DANIEL “I did, I went to theatre school at Studio 58, which is a program that’s run out of Langara College with more of a focus on theatre. I did a lot of theatre in the city for 5-6 years. I was exclusive to theatre before moving into film.”

HNMAG “Daniel – in this film, you’re a huge Bruce Lee fan and you perform some amateur martial arts. Do you actually have any martial arts training?”

DANIEL “I did take Karate when I was a kid, I did. I never made it past the white belt… but those are real Karate moves, from Kata! I don’t have any real actual training. Most of my training comes from watching Kung Fu movies. I am a huge fan of Kung Fu movies.”

HNMAG “There is an incredibly talented cast in this film, including Eric McCormack. Does working alongside a veteran actor like McCormack help you to bring a better performance?”

DANIEL “It is exciting and fun to work with an actor like Eric. He naturally raises everyone’s game through his charisma and ability.”

LOURIZA “Another reason Eric is so good, aside from his acting, his timing and improv – he makes us feel really comfortable. When we went out to dinner with the director and cast, he was truly interested in our thoughts on the script, which movies we watched, what musicals we liked – he made us feel so at ease. It didn’t feel like much added pressure; instead, it was more joyful to have him onboard.”

HNMAG “Louriza, I read that you started performing on the Rainbow Stage in Winnipeg. I also grew up in Winnipeg and am familiar with that organization. Would you say you are a natural performer?”

LOURIZA “I think the only reason my parents put me in dance lessons was to keep me out of trouble. I don’t know if they knew that something would come out of it but it kept me busy and I enjoyed it. I auditioned for the Rainbow Stage and got to play a munchkin in The Wizard of Oz and was in the Lullaby Guild.”

HNMAG “Daniel, you do a lot of running in this film. Were you an avid jogger going into this production?”

DANIEL “No, no, I don’t like to jog or run. In Highschool when we had to do runs, I would always slack off and give it less than 100 percent. I do play tennis pretty seriously though, so I do like exercise. Just running though – nope, not for me.”

HNMAG “What about you Louriza, did you participate in any Highschool sports?”

LOURIZA “Not really, but my school had a dance team and we would compete against other studios. I would do that almost every morning before classes. It was kind of my sport. I did everything; Hip Hop, Jazz, Tap, Ballet, Musical theatre styles and really dipped my toe into everything, except point. Point is where I drew the line. I wasn’t going to get up on my toes and do that.”

HNMAG “Would you ever like to be in a musical, Louriza?”

LOURIZA “I would love that. I grew up doing musicals with the Rainbow Stage but since graduating theatre school, it’s all been film and TV. I do miss it, so I would absolutely love to do a show.”

HNMAG “Daniel, when you read the script, did you immediately know how you wanted to play your character Mike?”

DANIEL “No, not immediately, but it came together pretty quickly after I had arrived in Penticton and I met Eric. We discussed how to play the two characters and how  Canadian they should be. The movie is loosely based on a real guy and after I had met him, I pulled some of the goofiness from him.”

HNMAG  “How long were both of you on location?”

DANIEL “We were both there everyday and we shot the film in 15 days in September, which is a little insane and usually half the time for a feature.”

HNMAG “Louriza, what is your biggest takeaway from this film?”

LOURIZA “That people can be really funny (laughing) and it’s really great. I think laughter is the best medicine and this was my first project since the pandemic started. I think everyone was hungry for laughter, so it was a beautiful thing.”

HNMAG “How was the audience reaction up in Whistler?”

LOURIZA “It was sold out, it was amazing!”

DANIEL “It was packed! The audience reaction was really good – they laughed at all the right moments.”

HNMAG “Will you be travelling to other festivals with the film?”

LOURIZA “I think our next festival will be in Victoria, so we’ll be going to that one, but it won’t be until February.”

HNMAG “What’s the most extreme activity you’ve ever tried?”

LOURIZA “Ziplining sounds pretty lame after that story, but I did ziplining in Whistler a couple of years ago. When I did it, they said it was the highest zipline in North America and when I looked up, I saw this shoe-lace type rope that was going to be supporting me the entire time and I almost didn’t do it. The people I was with told me I needed to go first otherwise I’d chicken out, so I did.”

HNMAG “What would you consider your dream role in a film that you haven’t played yet?”

LOURIZA “I grew up watching a lot of action movies, because of my dad. We watched Indiana Jones, The Mummy probably 30 million times, the Rush Hour films, so I think I would want to do an action-packed film – something that I’d have to train for a couple weeks, and make my pappa happy.”

Another fun interview in the books, as we say in the magazine world. Never a dull moment with many papercuts to go before I bleed. Daniel and Louriza are both blossoming actors hungry for roles that challenge, test and provide growth. They have fantastic comedy timing and I look forward to seeing them stretch their skills in their next Audience Favourite film. They have their eyes on the prize and perhaps a sequel to Drinkwater could see these two dazzle us once again with their incredible chemistry.