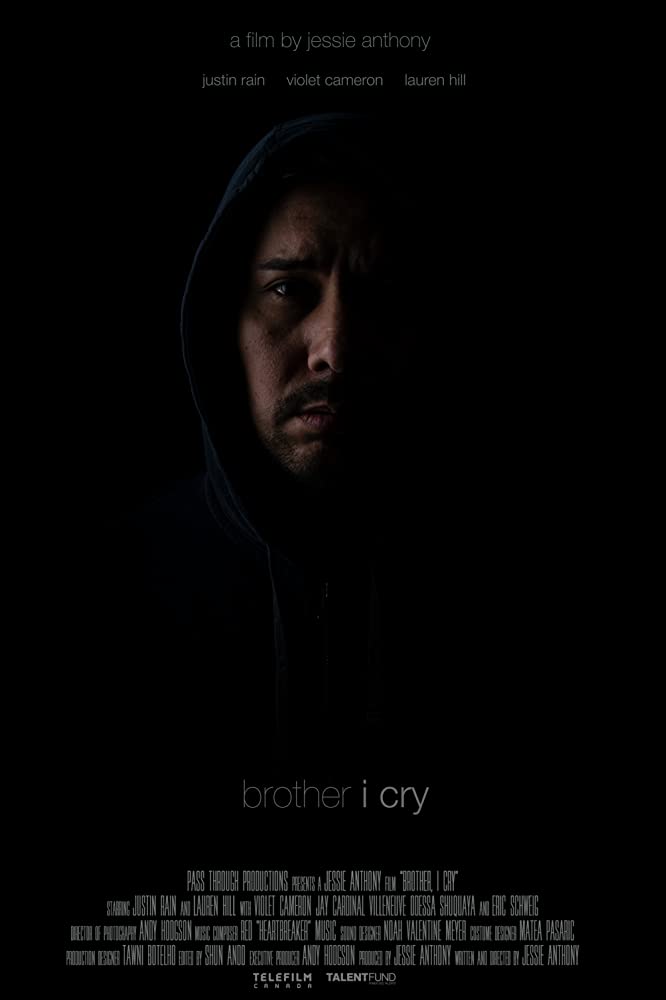 There was a pandemic happening before Covid-19 had arrived, and unfortunately there is no vaccine coming anytime soon. That pandemic is drug addiction and it’s taken more loved ones from us than any virus. We hear about it on the news but it’s never good and the numbers keep climbing with new faces of overdoses occurring in all ethnicities and ages, daily. They say an ounce of prevention is worth a pound of cure and that prevention can come in many forms.

The best way to send a strong message – make a movie! Jessie Anthony knows all about losing loved ones to addiction and she wanted to start a conversation about it by writing and directing her first feature film Brother, I Cry. It centres on a family’s struggle with addiction and is inspired by events in her own life. I had the great privilege of watching this incredible film… and I was moved. Although this is Jessie’s first feature film, she is a natural storyteller with an eye and skill for capturing the essence and heart of the story. She went straight from film school at CAPU to writing and directing her first feature film. It made its world premiere at VIFF on Sept. 28 and more festivals are to be announced. Jessie just won the Best BC Emerging Filmmaker Award at VIFF, and the film is screening at imagineNATIVE virtually this October. This film was supported by Telefilm’s Talent to Watch program and Jessie was recently selected by the Pacific Screenwriting Program, which runs from January – April.

I had the rare opportunity to speak with this amazing Indigenous filmmaker on the rise…and this is how that went.

“Congratulations on a wonderful film. I understand that it’s based on a personal story?”

“It’s a collection of stories; I had a dream about my brother overdosing and in it, he came to me spiritually – for help, because he couldn’t find his body. I tried to help him and then I woke up with this fear of it becoming a reality. I told him how scared I was for him and then 4 years ago, my cousin that is more of a sister to me – overdosed on fentanyl. She was 40 and had 5 kids, she’d also taken care of me from a young age and I lived with her in my teens. While I was focusing on my brother, my sister died. She was a product of her environment, there was intergenerational trauma and she was in a bad place, doing what she was doing. In 1 year, I lost 6 people in my community due to drugs and fentanyl – I knew that a dialogue had to be created.”

Jessie adds that she actually based the screenplay on the dream that she had 4 years ago while still in school. She’d been writing a piece for her graduating film from Capilano University. She’d originally written an 18-page script and her instructor said that it had too many locations. She cut it down to an interesting 6-minute film that she used to apply to Telefilm Canada with, in the ‘Talent to Watch Program’ and she qualified.”

“When did you start making the film?”

“I had won the award in July of 2017, we went to camera 2 years ago and we’ve just finished post on it in time to deliver. It’s taken a little longer but I was finishing school and was also in the Pacific Screenwriters Program, so there were a lot of moving parts.” “Did you collaborate with anyone on the script?”

“No, but I did have a story editor, Zoe Hopkins that hopped onboard and had given it a few reads and a few notes, which I had applied. I also went backwards on some because my actor was highly influenced by the script. He encouraged me to stick with the first true version. When we got to draft 11, he said ‘I signed up for draft 7, what is this?’(laughing) So I had to bring back some of those elements.”

“Did you find your entire cast in Vancouver?”

“I did, with the exception of Lauren Hill, who plays Ava. She’s from my territory, which is 6 Nations. I chose her for 2 reasons – one being, that physically she looked like she was from my area and represented where I’m from; light coloured skin and other features. As an Indigenous, I wanted to show that we don’t stereotypically look the same. I also wanted someone who sounded the same way as where I was from… but the main reason I love Lauren is because she was in the first version of the film and she has such a natural raw but subtle approach to her performances that I just love – and I wanted to bring that out.”

“Were all the tattoos on the characters real or make-up?”

“Most of them were fake but there were some real ones.”

“How long did it take to make the film?”

“Did you manage to get craft services up there?”

“Absolutely! We had caterers for the first week and then my cousin took over. She had flown up for moral support but she actually caters for a lot of people back home, so she said she could take care of it. She gave us some of the best meals – one day she cooked up an entire Thanksgiving turkey dinner. Her cooking was so good that people with eating restrictions were eating the main meal because they couldn’t resist it (laughing).” “There’s great chemistry between the cast – did you have to audition many actors to find that?”

“I already knew going in that Lauren was going to be Ava and Justin Rain, I knew from working with – in theatre camps for kids. We hit it off and after he read it he wanted to be a part of it. We also auditioned people in my territory for his part but when he read it, he brought his own experiences to the table and he understood it. When he dove into the dialogue, I not only saw my brother but I saw a collective of people.”

“When you write a screenplay of this nature, are you basing the characters on real people or are they purely fictional?”

“I have bits and pieces of different people in mind but there’s also bits and pieces of myself as well. There’s a scene where the character talks about being sexually abused at 6 yrs. old… that was personal and I wanted to reflect that in there. The relationship with Jon and being an unstable addict – I went through that. The role of Jon’s pregnant girlfriend was originally filled by another actress and something didn’t feel right as we drew closer to camera. I believe in prayer – and I started praying at the beginning of this production… and sure enough, that actress said she needed to go home. Justin had suggested 2 other actresses and one happened to be Violet Cameron. As soon as I heard her read, I knew that she was the one and they had incredible chemistry.”

“Where can everyone see the film?”

“It will be having it’s world premiere at the Vancouver International Film Festival and you can purchase a screening virtually online, as of Sept. 24 – Oct. 7. There will be 2 theatre screenings running simultaneously at 6 PM on Sept. 28 at Vancity Theatre followed by a Q & A and at the Cinematheque Theatre.”

“How large of a crew would you have used?”

“Was it all shot in 2 locations in Vancouver?”

“It was shot at a home in Capilano and at the St. Mary’s residential school in Mission. I wanted the film to feel institutionalized, so it was quite ironic that I was able to shoot at a residential school, where a lot of intergenerational trauma happened. It served 8 locations including the jail cell scene. Our production design team worked very hard and it turned out very beautiful.”

“What do you hope for your audience will walk away with after watching this film?”

“I hope that they will better understand the triggers of addiction and I hope it will create a dialogue. It doesn’t matter what race, ethnicity or background you come from – addiction is addiction. Although I wanted this to be a modern Indigenous story, I also want people to feel that its okay to talk about it and that we all know someone going through addiction. I believe the more we’re united and aware of it, the better we can support each other as well as families affected by drug addiction. We also need to stop being enablers to the addicts in our own family/friends to appease them.”

“You cover many issues in this film. Were you able to accomplish all that you wanted with this film?”

“I always like to say, you’re going to have 3 movies; the one you write, the one you shoot and the one you edit. When I wrote it I wanted to bring in more of Ava’s personality and a little more of my own perspective on the loss of her grandmother. As I grow, there’s always going to be instances where I wish I had done this or done that, but I have to trust the process in that, it is exactly what it’s supposed to be and keep moving forward… and the things I didn’t get to tell in that story, maybe I’ll get to tell in the next story.”

“Do you have any future projects in mind after this film?”

“I absolutely do. When I was in the Pacific Screenwriters Program – I wrote a pilot, By Blood – about a woman fighting the child welfare system to get her child back. In saying that… I also want to make a shift into comedy. I’m currently writing a feature called Bingo Nights, which is an ode to our grandmothers. It’s a comedy heist movie.” It was so great to see the passion in a filmmaker’s eyes and to know that, they are right where they belong.  Jessie Anthony is a talent and rising force in the film industry and this film is a fine example of a blossoming filmmaker that can write passionately while impacting her audience and spreading awareness.