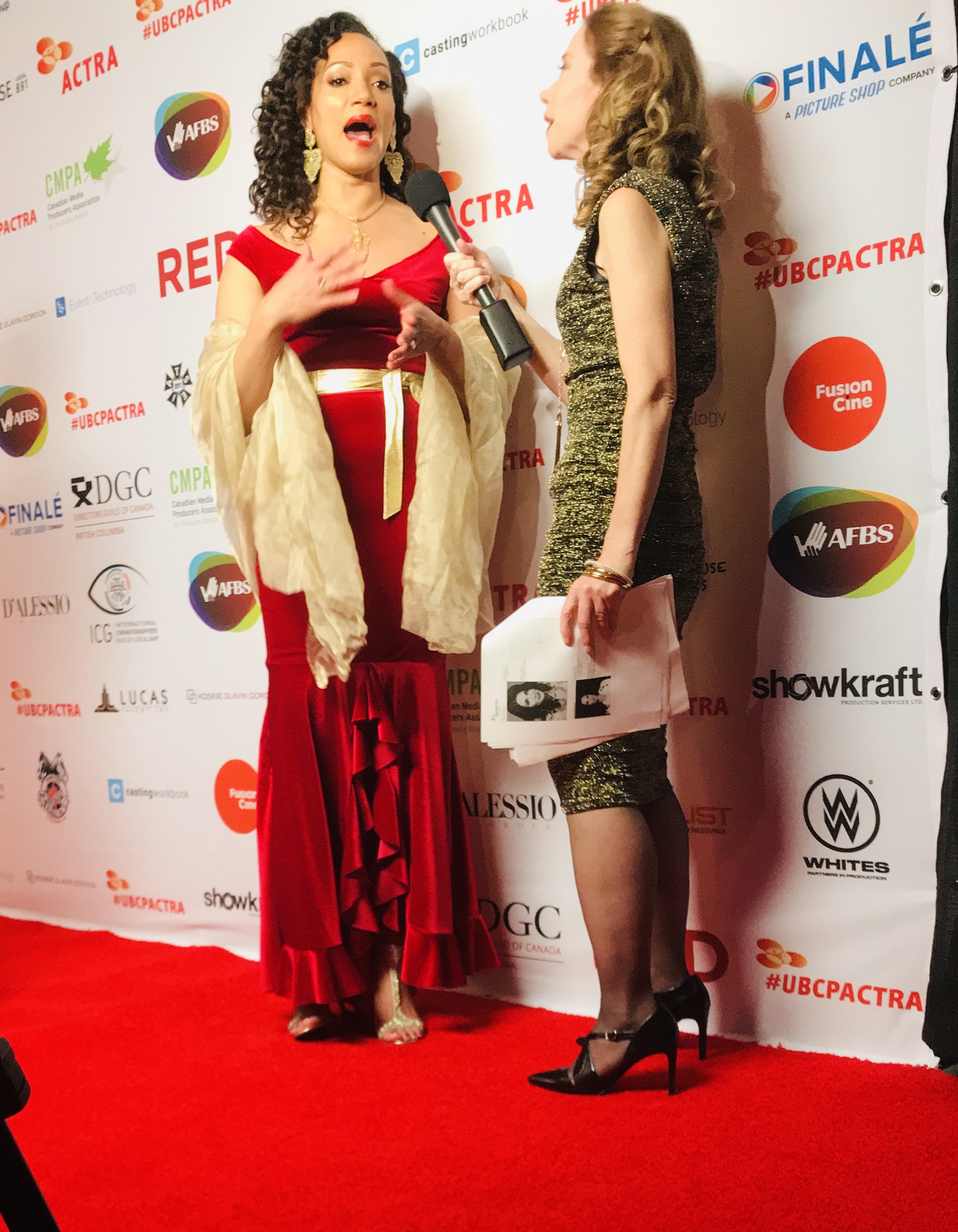 The glitz and glamour were on full display at this years’ UBCP/ACTRA Red Carpet Event and Awards Show this past weekend. If everyone has a story, then you can multiply that by twenty for every person that walked the carpet that night. They are the characters we fell in love with and some that we’ve come to despise because of the diverse work they’ve done in film. They’ve made us laugh and cry, they’ve made us angry and frightened and they’ve given us a sense of who familiarity without truly knowing who they are. The red carpet is where we have that opportunity to peel away some of the characters they play and truly find their core.

Certainly everyone appears so different from their characters we’ve come to know on the screen and Lorne Cardinal is no exception. He looked smashing and very stylish in a very fetching suit. I think I need to stop shopping at Bed Bath and Beyond for my outfits. He was my first guest that I was chomping at the bit to talk to. I had been familiar with his work as Sergeant Davis Quinton on Corner Gas, Kayak to Klemtu and Never Steady, Never Still. Lorne has been in over 80 productions and is the recipient of multiple Gemini Awards and has also won an American Indian Movie Award. His work and dedication have made him a much sought after actor and he continues to stay busy with multiple projects in the works. I’d never spoken to him before and became slightly rapt as I anticipated his approach. “Hello Lorne, it is a pleasure to meet you. I’ve been enjoying your current work on the now animated Corner Gas. What other irons do you have in the fire?”

“I’m currently working on Molly of Denali. It’s also an animated series that can be seen on PBS and CBC Kids. It’s set in Alaska and it’s the first animated series featuring an Indigenous lead family in American TV history. It’s quite relevant and fun to do. Each episode is 15 minutes long and the talent is incredible. We have Indigenous actors from Seattle, Edmonton and here in Vancouver. We’re also being directed by the incredible Nicole Oliver (My Little Pony, The Man in the High Castle, Unspeakable), she’s well known in the voice world.”

“Can you tell me how this new animation was inspired?”

“It was actually thought up in the US, in Boston. One of the executives had said that they didn’t have a series like this, lets create a story. They made some connections in Alaska and also have a lot of Indigenous writers and consultants involved in the story.”

“Do you then have to travel to Alaska for the series?”

“No, I’ll record in any studio they send me to. I’ve been working in a Vancouver based studio and when I’m on the road I’ll go into the local studio and plug in.”

“Can you tell us what we can expect to see you in as we peer into the future?”

“I just finished work on a feature film on Six Nations in Ontario. It’s called Running Home and is written and directed by Zoe Hopkins that I’ve worked with in Kayak to Klemtu. She’s a wonderful writer and director. The story is about a young girl who’s life is in disarray, is depressed and mourning the loss of her mother while raising her son by herself. I play the father that’s also depressed. She gets visited by the ghost of Tom Longboat (legendary long distance runner) that helps her to get back to health.”

“Is this story based on pure fiction?”

“It is fiction as well as a beautiful family drama. I read it, I laughed and I cried, so that’s always a good sign. It should be out next year sometime.”

“What is it about a script that draws you in to get involved?”

“It’s the story. Once I read it, get excited about it and can visualize it in my mind I love jumping at it. I should also mention that I’m in a recurring role in Dick Wolf’s new production of FBI’s Most Wanted on CBS. It’s myself and Nathaniel Arcand and I play his father. I’ve been flying back and forth between here and New York quite frequently for the filming.”

Lorne Cardinal was as charming as he was classy. I hope to see him in on the screen, big or small because he’s not only a great Canadian but a great ambassador for Canadian film.

My next guest was Hiro Kanagawa. A Vancouver based actor born in Sapporo Japan. He was looking very dashing with an element of swagger. He can be seen in Limetown, iZombie, Parabola, See and the anticipated TV movie Alive II.

“It’s a pleasure to meet you Hiro. I know you’ve been very busy lately and are involved in a number of productions. Can you tell me about them?”

“The last five years have definitely been among the busiest.”

“What do you attribute that success to?”

“I think maturity, my own maturity, life experience and my command of the craft. The industry is also changing so I think there’s more opportunity for diverse actors. There’s also the fact that there’s more product; there’s so much more being made now.”

“What is it that draws you to a character?”

“I think anytime a character has conflict within them and are compromised/conflicted it’s always something that as an actor, is an interesting in into the mentality and emotional life of the character.”

“I think the journey is its own reward. Certainly seeing the final product is always exciting but I think the process of being on set, doing the work and the process of exploring the character with your fellow actors and the crew; that journey and that process in itself is the biggest reward as an actor.”

“Do you see yourself doing theatre in any future productions?”

“Would you ever consider a production in Japan?”

“I have actually shot in Japan. I was in a BBC docudrama ten years ago. We shot in Kyoto and it was a great experience.”

The red carpet is always a favoured venue for fast paced off the chin responses to film inquiries. The answers are unscripted, they’re sometimes surprising but most of all they’re genuine! It’s always a pleasure and a treat to capture the moment and offer thanks for their great contributions to the film industry. Goodnight and see you in theatres soon.