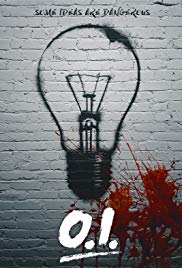 The Vancouver Short Film Festival has recently embraced us with many golden film nuggets that continue to raise the bar. It’s always amazing when you’re watching a story unfold on the screen that not only captivates you but also fulfills every expectation. Your emotions have been stretched to the limit and once the credits begin to roll you can’t believe a short film has just brought you to the edge of fright and back or it made you laugh so hard you snorted. Maybe it brought on tears of sadness, joy or redemption. If it made you flex your emotions then that is the calling card of a good filmmaker. After all, the great ones have all cut their teeth with short films before moving onto features.

B’Cee Van Heerden is a filmmaker with a knack for storytelling. His film O I (Original Idea) had screened at VSFF and at the closing night party I was lucky enough to talk to him about the making of his film.

“Can you explain the premise of your film?”

“It’s about a guy that comes up with an ‘original idea’ and he’s the only one immune to it.”

“How many people were involved in the making of it?”

“When did pre-production begin?”

“It started in September/October of 2017 and then we shot in Nov 2017. We finished editing in June of 2018 and it’s been to a few film festivals since then.”

“What locations did you use to film in?”

“We shot at the Waldorf (Tiki Bar) on Hastings in Vancouver, we were in Burnaby in our kitchen and the Riverview Hospital grounds.”

“You wrote and directed this film. What inspired you to make it?”

“There’s a lot of people in the movie industry that carry on about how original they are or they say how original their content is. I wanted to explore what it meant to be original cause I don’t believe there is such a thing.”

“Would this be considered a comedy?”

“A thriller or dark comedy.”

“Everyone I’ve spoken to has loved it. They’ve all enjoyed it and I’ve had a few people come up to me afterward and say congratulations.”

“How many actors are in it?”

“There are 5 main actors and some extras. We had Ben Cotton, Kett Turton, Jennifer Nicole Stang, Toby Hargrave and Paul McGillion acting in it.”

“How long have you been making films?”

“Fifteen to twenty years. Before that I was with theatre. This is the first short film that I’ve been proud to put my name on.”

“What comes next after this film?”

“I’ve got another short film that I wrote that’s more in the thriller/horror genre. I’ve also got a few feature projects that I’m still editing and hoping to finish one this coming week.”

“How did you finance the film O I?”

“We self financed. We’re in a lot of debt (laughter). It was one that we felt was worth it to do the way we wanted to do it.”

“What happens with the film after the festival run?”

“We’re going to be releasing it online. We just want people to see it because we’re very proud of it. We want to make it possible for people to watch it and enjoy it the way we enjoyed making it.”

“Where is the film going to be shown after this festival?”

“It will be going to the Clermont-Ferrand film festival in France and then Germany before heading to a festival in Napa Valley in California.”

O I is 18 minutes long and we hope it continues to raise eyebrows and cause a little chatter. N’Cee Van Heerden was generous with his time in speaking with us and we wish him continued success.