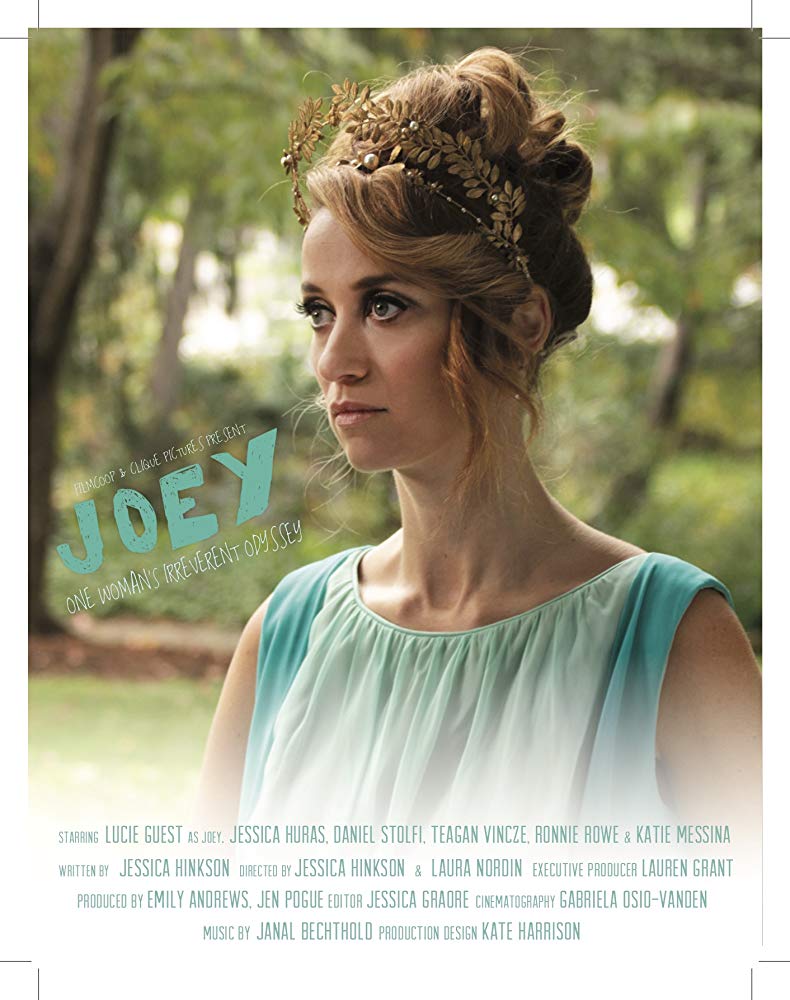 If I didn’t know it before I know it now… my favourite people to talk to are the funny, creative and witty kind, followed only by people that are asleep. They drool out the most extraordinary answers! One person I’m adding to my ‘extremely talented and interesting people to talk to’ book is Lucie Guest. She has over 56 projects under her belt and resume with outstanding roles in Blackstone, Orphan Black, Girlfriends’ Guide to Divorce, iZombie and most recently as a regular on The Chilling Adventures of Sabrina, which is currently airing on Netflix. It’s dark and alluring, I’ve started watching it recently.

Lucie loves what she does as an actor but when she takes that hat off, there are two more. Lucie Guest also wears a writing and directing hat, so if you see her with hat head, now you know why. She is creative; she is a very talented actress and a comic force that loves collaborating. She also wrote, directed and starred in Never Better: A Closure Comedy, funded by Storyhive. You can envelop yourself in her comedic prowess in the film Joey, written by Jessica Hinkson and co-directed by Jessica and Laura Nordin. It is part of the Canadian Film Fest and will make its premiere on Saturday, March 28 at the Scotia Bank Theatre in Toronto at 12 pm. I watched it a couple of times and absolutely loved the cast and Lucie’s art of comedic timing. She pulls off a complicated character going through a flood of emotion but handles it like a pro!

I had a tremendously fun time talking to her and would love to do it again sometime. Without further ado, our meeting of the minds went something like this…

“I really loved your character in the short comedy, Joey. Was it your idea to play the character that way or the directors?”

“It was a little bit of both. Jessica Hinkson co-directed the film and also wrote it. She’d been talking to me and writing about this character for about a year before she made the film. She’d call me up and share tidbits here and there of what she was thinking as well as giving me the backstory. She had mood boards for the character and we’d have discussions about her vision of the script. I wanted to incorporate her art film through the character of Joey in a grounded way. The character is comedic but she’s also going through a lot underneath the surface. I wanted to give her layers.”

“You’ve been in over 56 productions. Have you played multi-layered characters in the past?”

“My favourite characters to play are complex and layered. I like when a character can straddle the line between comedy and pain. I had made a short film called Never Better where I played the lead character. It’s considered a closure-comedy because she is going through a breakup and trying to find closure but finds something completely different in return. It’s a comedy but it was about a breakup… and grounded in some real pain. I do enjoy playing layered characters and Jessica’s film was really fun because she had a very unique vision from the very beginning.”

“I know that you’ve been involved with comedy for a great number of years and studied improv with the Upright Citizen’s Brigade and The Groundlings in LA, you’re also a graduate of Second City in Toronto and also write your own comedies; do you prefer to work in comedy?”

“Indie comedies are my favourite to watch, to write and to be in. I love comedy and grew up watching British comedy with my grandmother; shows like Faulty Towers. There’s always been a love in the family for comedy and it’s always interested me.”

“That really leads me to my next question. Did you think you inherited the comedy bug?”

“Probably, that and the fact that we moved around a lot and you become a product of your environment. Drama and improv classes are the first place I’d make new friends. I remember a time when I was in a 5th grade production of The Grapevine and I added some improv. I had no lines and was just a background performer but I remember out of the corner of my eye, seeing my art director/teacher/piano player laugh along with the audience and realizing it was fun and that I wanted to do more of it.”

“As an actress/director that also writes, can you explain what your writing process is like?”

“After the procrastination (laughter), I like to start with an outline and put things on the wall. Visually seeing cards on a wall that I can move around has always been a good process for me when I’m breaking the outline. Once you’re in the flow its great but when you’re not, it’s a matter of trying to avoid going to the fridge to see ‘what else is in there?’(laughter). Sometimes I also like to change my environment and go to a café. I also enjoy co-writing and the last film I wrote was with a writing partner. She lives in LA and we outlined together in person with cards. We’d go back and forth, split up scenes and pass the script back and forth. It’s so nice to be accountable to somebody as apposed to being on your own timer.”

“Have you co-written before?”

“When I was in Second City, you learn to write from improv. Your sketches are born out of the improv that you do. It’s a very collaborative process and I love the process of co-writing. Of course it depends on the project. Some stories work well with a partner and other times it’s really your own creative path.”

“In todays entertainment climate, do you see more women putting their work out there and having it more widely received?”

“It seems like television, especially the streaming platforms are really embracing diverse storytellers more and more. I think it’s really important to hear stories from different storytellers it makes for richer content. I think it’s happening more but maybe not so much in the ‘feature film/Oscar’ categories but I do find that there are more female directors working in television. It’s hard for me to say if they’re more female writers because I don’t know who’s in the writing room but I can say that some of my favourite shows on Netflix and Amazon are created by females.” Lucie offers advice to other new writers. “Writing is such a good outlet, so just start writing what is passionate to you and your own story, even if it’s really specific and feels niche; I feel like those are the most interesting and seem to do really well. It’s nice to hear other people’s perspective other than your own.”

“As a writer/actress/director, are you more comfortable directing your own scripts?”

“With your own material, it’s so close to you, you understand it and it’s been part of you for many months. When I’m writing something I’ll often get ideas on how I want it to be realized, so it’s nice to be a part of the project from the beginning, middle and end; I like the full circle feeling. I’ve also directed projects that I’ve not written and that’s also so nice, not having to write something in order to direct. It filters through your lens and I really enjoy collaborating with other writers on projects. It’s really nice to be the director and have everyone bring their own expertise to the table and guide the project forward.”

“Umm…. I really like vegan pizza; it’s my guilty pleasure. I’m also a fan of the smoothies, the green smoothies. It’s not really a snack, I’m vegan and I’ve never eaten meat before. I pretty much stick with eating vegan and otherwise eat quite healthy.”

“Would you rather bake or cook?”

“Ooh, I gotta go with baking?”

“I like to hang out with friends or go for a hike.”

“You’re currently on The Chilling Adventures of Sabrina. Can you tell me about your character and the show?”

“I play a character called Circe. Circe is part of a mysterious carnival that rolls into town. She’s first introduced as a ‘palm reader’ but she’s actually an old world Pagan witch goddess (laughter). Upon my research into Circe, in the Greek mythology she turns men into pigs. It’s out on Netflix now and they released the seasons in parts. The first season was part I and II and the second season is part III and IV. The Chilling Adventures of Sabrina is a much darker version of the original Sabrina the Teenage Witch.”

“Can you talk about other projects you’re currently involved in?”

“Right now I’m writing a passion project that I’m hoping to direct in the next few months.”

“Would you also be producing it?”

“No, I like to stay away from that part. Acting, directing and writing feels like a creative intersection and sometimes you end up producing because it’s a short film and you have to wear many hats but it doesn’t come to me as easy as the others.”