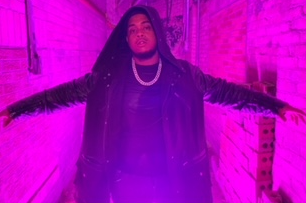 It’s not easy fitting into a new town, but music has always been a great way to introduce yourself. Everyone speaks the same language and it keeps the beats, the rhymes, the groove and the message behind the lyrics fresh. Fresh lyrics and a new sound should always feel welcome – which seems to ring true with hard working, jokester pranking and all-around funny guy GETTY. From Jersey but born in Toronto, he’s come back to make his contribution to the music scene in good ole TO… and he’s got plans for the girls, the clubs and your backbone and hips. He wants to get people up and moving but only once it’s safe to return to the dance floor, the house party or your favourite place to jam.

I spoke with GETTY about his music, his inspiration, a good place to visit in Jersey and pizza. Food is also something that brings people together but we kept most of the conversation to music… and swimming with sharks, skydiving, aliens and disguises!

GETTY works hard to realize his dreams as a postal delivery and he is about to have the busiest season on record. With online shopping being the safest way to shop, he may have to leave the music creating for later… but after speaking with GETTY, there’s really no indication of him slowing down.

HNM “Where does your music come from?”

GETTY “The music I make comes from past experiences, people that I know who are going through stuff. I’m talking about my past and for people that can’t speak for themselves.”

HNM “You’re fairly new to the music scene of Hip Hop. What inspired you to go in that direction?”

GETTY “Honestly – my friends, my cousins, people around me that make music. I didn’t really get into it until 2018, after I was doing a little freestyle for a friend. He thought it was really good and suggested we go into the studio and record something. It’s where I met my manager and we’ve been making music ever since.”

HNM “Your latest track MIGO’s. What was it inspired from?”

GETTY “Pretty much where I come from; I’m from Jersey but was born in Toronto and moved to Jersey at a year old. I’m pretty much describing Jersey people – we’re all hyper-tweaky (laughing).”

HNM “Do you recommend it for a holiday? I like road trips.”

HNM “When you created the track MIGO’s, what came first, the music or the lyrics?”

GETTY “Honestly, when I write songs, I like to smoke first to clear my head. I listen to the beat and if I like it, I write to it.”

HNM “Would you say that you found your flavour/groove in Hip Hop?”

HNM “You’ve been doing this for 2 years now. When was your last live performance?”

GETTY “I haven’t performed any shows yet, I’ve just been recording music.”

HNM “I had watched a few of your videos and they look great. Will you be making more soon?”

GETTY “Yeah, we shot in downtown Toronto, it was pretty cold that night (laughing). I’ll be making more videos soon and probably shoot another video in the next month to release a new song.”

HNM “You’ve collaborated with other artist in the past. Is there anyone out there you’d dream of collaborating with on a song?”

GETTY “Right now, I wouldn’t mind making a song with Swagger Rite, he’s an artist out in Toronto. I’d also like to make a song with Yung Tory and two other artists – Comethazine and Kid Buu.”

HNM “How did you come up with your name?”

GETTY “I’m from a rough neighbourhood in Jersey called Hillside and I’m just speaking my mind for people back home that can’t really tell their stories.”

HNM “Do you play any instruments?”

GETTY “No, but I’d like to learn how to play piano and the guitar.”

HNM “Would you rather go to a comedy show or go watch a circus performance?”

GETTY “A comedy show. I’m a prankster myself and like to tell jokes (laughing).”

HNM “If you could suggest a new Olympic sport, what would it be?”

GETTY “I don’t even know to be honest. I don’t know what I’d invent (laughing).”

As a very strange coincidence, a week later after this interview, it was announced that they will now have breakdancing in the next Olympics. Who knew?

HNM “If you could disguise yourself as anyone for a day, who would it be?”

HNM “Would you rather try skydiving or swim in a shark cage?”

GETTY “I’d rather go skydiving because I can’t swim (laughing).”

HNM “Is it easier to believe in ghosts or aliens?”

GETTY “I would say aliens because there’s more out there in the universe than just us. I feel like there’s someone out there that’s watching us and we wouldn’t even know it.”

HNM “Would you ever write a funny song to make everyone laugh or lift their moods?”

HNM “What are you writing about these days?”

GETTY “I’m trying to make more music for the ladies, more high energy for the clubs, stuff that people can vibe out to, stuff like that.”

HNM “Did you want to give a shout out to the producer or studio where you made Migo’s?”

GETTY “I made it in Mississauga/Brampton, Ontario at a studio called Wave Lab Productions. Shout out to Nick – he’s the sound engineer I’ve been going to for the last 2 years.”

I don’t normally seek out Hip Hop music but GETTY’s new song Migo’s made me want to turn it up to 10. The neighbours must have enjoyed it too, because they were tapping on the wall to the beat. Go figure!