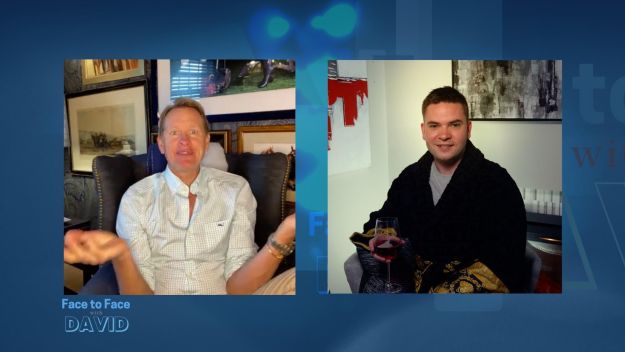 If you told me a year ago that you wanted to create a talk show out of your home through video conference – I would smile and tell you good luck with that. These days, we all have to think outside the box and reinvent the wheel if we want to keep moving forward. The entertainment bubble has burst and the model has completely changed… maybe forever.

Networks are scrambling for new content and what that new model might look like. If you were working in entertainment before Covid appeared, these past months must be hell. It’s not easy to turn a negative into a positive but if you give it enough effort… it is possible. Move over late night, there’s a new kid on the block and he’s bringing some amazing star talent with him.

David Oulton is not one to sit idle too long or let a pandemic dictate his coming days, so instead – he created his own talk show, Face to Face with David. He and his team reached out to Amazon Prime with the idea of creating a show from his home and they embraced it.  Having completed the first season, it’s now available on Amazon Prime Video in the US, UK, Germany, and Japan on July 15, 2020. Face to Face with David is a perfect balance between educational and informative interviews with a nice mix of household names, established Hollywood talent, emerging talent, and business people. David may have a lot of envy from other talk show hosts, since he interviews his guests in his Versace housecoat while sipping great wine – who wouldn’t want to be in his slippers/shoes. Filming his guests from their homes has made the show a lot more personal and intimate – you get to see where his guests live, and a glimpse into their home life.

I caught up to David Oulton at his home in Calgary and we had a great chat.

“When you had the idea for this show, how did you go about pitching it to Amazon Prime?”

“Covid-19 presented a perfect storm because everyone is looking for new content. It started with boredom and the lockdown – I called up my agent to tell them I was absolutely losing my mind. I initially had planned to call up friends in the industry on Facetime and have a chat with them, record the calls and later post it on Instagram. Within a few days of chatting with people, we had an agreement signed with Prime video to stream the series in the US, UK, Germany and Japan through their back-end business partner program. With Amazon there is a strict set of guidelines that you have to stay within in terms of content but we met all the criteria and it was a perfect partnership to stream the show. Unfortunately, there wasn’t much interest with networks in Canada, which was interesting. I hired a local production company in Calgary, L & C Style Productions which has been great and has allowed us a lot of freedom and they’ve been able to guide us along in getting the content out to millions of people – it’s really fascinating.”

“Can you walk me through what one of your shows would look like?”

“When the show starts, there’s no opening monologue, there’s no jokes – we just dive right in. The format of the show in season 1 consists of having 2-3 guests per episode. The first episode is now up on Prime and my first guest is Carson Kressley from RuPaul’s Drag Race and Queer Eye. We talked for approx. 10 minutes and because the streaming is available anytime/anywhere the conversations are kept broad ranging rather than current events. We discuss their career and the highs and lows as well as more general topics – we want it to be timeless. There’s a little break between guests where I talk to the camera and build on our audience before jumping into our next guest/interview, which happened to be Debra DiGiovanni – a really hilarious comedian who is Canadian but lives down in Los Angeles… and then we’re done. It’s a half hour show and without commercials it’s a 22-23 minute episode and moves at a pretty fast pace with the focus on the guest.”

“How do you go about preparing for each guest?”

“We put together a pretty good team. Rae Farrer is an actress/producer in Calgary and she came onboard as the talent producer. Once a guest had been confirmed, she and I would sit down and begin a thorough research on the guest, who spanned the beginning of their career to present day. We look for interesting highlights, controversies and hidden facts/lesser known details and form a conversation around that. Every interview starts with a formula – much of our audience are people wanting to break into the film industry in some way, whether that’s in acting, music, writing or journalism or if they’re just looking for fame or notoriety. Because of that, we’ve asked our guests if they had any advice for anyone taking their specific career path… it’s a recurring theme in the show.”

“Are there any subjects/questions that are strictly off limits?”

“All of the guests on the show were all fair game. There was only one guest that was a 3 time Emmy winning comedy writer that requested we don’t bring up any controversies regarding any host of shows he’s worked on. For the most part, everyone was very open minded to everything and came without restrictions. We had the most restrictions and most pushback from guests that ended up not being on the show. In season 1 we had such a great line-up of guests – 17 in total and they were all so down to earth and so easy going. It’s meant to be easy watching but when you put too many restrictions on, it makes it too rigid. There were actually some guests that were so open and so honest on the show that we had to edit some stuff out, because they were being too honest and open.”

“What is your biggest takeaway from interviewing these celebrities?”

“I think the biggest surprise for me was – how willing people were to take part in it. We had some big rock-star names in season one but in the booking process we spoke to over 200 people. One of the more surprising things was, the bigger and more well known the star was, they were the quickest to reply and were the most gracious. We reached out to ‘everyone’ and had personal replies back from Meghan Markel, Madonna, Kris Jenner… and they all took time to respond, share advice and tips – that was most surprising to me to hear back from most of them.”

“Hmm… lets see, Madonna because she’s so hilarious. When we reached out to her, within a few hours she had replied back. Next is a more personal one – Judi Dench because she was the one that got me started in film. We had reached out to her but she was unfortunately in lockdown in the UK and had sent us a lovely letter wishing us the best of luck. My third would be… Wendy Williams – I am such a huge fan of hers. If I could ever be a guest on her show, I could be happy and retire from that and go back to selling real-estate forever.” David informs me that he divides his time between his real estate agency and filmmaking.

“How much work goes into producing each episode?”

“Quite a bit, we have 7 people on our team, which is still relatively small but we work almost non stop on it. Having six episodes that add up to 3 hours of television is a lot of work to throw together from concept to cameras rolling – we had a six-week turnaround.  Some of the Pros and Cons of the show were; it was so convenient to use Skype, Zoom and other programs to video-conference with and the Con was, some of the guests needed educating on how to use the programs. There was definitely a lot of effort and work combined with 16 hr. days in the week we were filming.”

“Have you ever been intimidated or nervous with a guest?”

“No… I don’t get star struck too often. There’s only been one time in my life that I’ve ever been star struck/nervous to meet someone. Everyone was so easy going. The top 4 guests we had that are household names were so easy-going and so easy to talk to. They were so incredible that they took a lot of the tension away for me.”

“How do you maintain a balance of guests?”

“In terms of balance – it came down to, ‘what are people interested in?’ We looked at a lot of other shows and I binge-watched Wendy Williams and Marilyn Denis to look at formula and ways that they’re structured – I also looked at interests. We tried to strike a balance between big names/familiar faces and then contrast them with guests that might be lesser known but extremely talented with a really interesting story to tell. With every interview, we want to make it entertaining while having a takeaway. We span such a vast array of industries, genres and sectors – it’s been fascinating.”

“When you’re reaching out to your guests from across the globe, do time zones become an issue?”

“Oh my goodness – Yes. Rae Farrer and I had a giant spreadsheet that we were editing and blocking in guests for their interviews. It wasn’t until 3 days before shooting that we realized we were all on different time zones. Some of them had 2 homes and we had to figure out which home/location they were going to be at and which time zone it was in. It was a mad rush of rearranging the guest line-up.”

“When you were filming, did you have to follow Covid -19 safety measures?”

“Yes – we were very stringent on that. Thankfully I was the only one behind camera on set; we were very good at maintaining social distancing, everyone had masks and were tested and isolated before hand, we had hand sanitizer and everyone was so respectful. We never had any issues with anyone ‘not’ social distancing or taking precautions. It was a fun shoot but we were all very safety conscious. In terms of attitude/atmosphere on set – it was fun, easy going and really great… and we produced some really great content.”

“If you could disguise yourself as someone for a day, who would it be?”

“OOOhhh… I think I would want to be… I don’t know. This is probably not the answer you’re looking for – but it would probably be someone in the central US that lives on a farm in a very small community – it’s the complete polar opposite of myself because I live such a dynamic life. I think it would be very interesting to see what it’s like to live such a quiet peaceful stress free life. In all honesty, if I could choose – that would be something that I’d want to experience. I get bored so easy, so I stress myself out by loading my schedule with things to do (laughing). My film career wasn’t good enough, so why not throw real-estate into the mix – acting’s not good enough, so lets add producing. Now that we’ve had to slow down because of the global pandemic, lets put out a TV show (laughter). I always like to go with ‘bigger is better’ so it would be the exact opposite of my life.”

Face to Face With David is unique, it’s smart and it’s entertainment, which we all need more of these days. Thanks for picking up the ball, David and running with it.