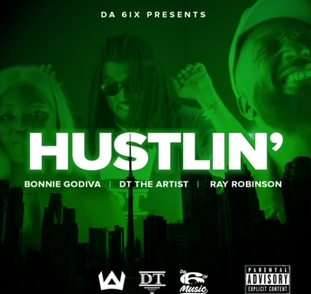 Hang onto your hats, your speakers, your pictures on the wall – because it’s about to get LOUD in here! DT The Artist releases his fresh out-of-the package track, HUSTLIN. If the parents are out and you prefer the house with a little bounce, then HUSTLIN is everything you’ve been anticipating… and then some. There’s a fusion in the air that feels like old school melodic meets soulful vocals from the future. The vocals act as the sports car and the beats, the rhythms, the bounce is the highway. DT refuses to take all the credit though because he had some help from his friends, Juno Award winner Ray Robinson and the extremely talented Bonnie Godiva. This song is designed to motivate, inspirate, initiate and propagate a moment of bliss with good friends on the dance floor, your living-room or shower! Wherever it is that you like to two-step with a shuffle and slide is where you will want to turn this track to 10.

DT broke the mold when he came onto the music scene. He is authentic with a rare nectar derived from experiences in the industry that help to shape a music artist. There truly is no better teacher than experience and the relationships you form along the way. He began his career in Toronto, before making a Hip- Hop pilgrimage to New York City.  There, under the mentorship of Spice, of Platinum Dreamz’ DT gained the knowledge and skills needed to maneuver the ups and downs of the music industry. DT’s tenacity and love of performing and mentoring is leading him to the top of his game and Hustlin is proof of that. He’s performed at large venues across the country and toured Europe multiple times – opening shows for artists 50 Cent, Rick Ross, Afroman, Pastor Troy, Ludacris, Chief Keef, Karl Wolf, Moka Only and Kreesha Turner.

After witnessing DT The Talent’s high impact performance and audience reaction at a stadium event, the NajWieksze Jol team, (Tede, and Jakuza) signed him to their team, the labels first international artist. DT has since partnered with Ilionize Management and stays very much involved with all aspects of his career.  “Understanding the business of Hip-Hop is as important as performing it” says DT.

I had an extraordinary talk with the big man (6’ 5”) who is incredibly humble, funny, inspiring, kind and an incredible mentor to younger music artists. He is paying it forward on his dime and I am anxious to share his story and his passion. Roll the tape!

HNMAG “I love your new track, Hustlin, and the great vocals. It’s a very groovy and catchy melody. What was the inspiration behind that song?”

DT “I like to make music that’s motivational, that you can workout to, that inspires you to work hard and make that paper. With this song, I approached Ray Robinson and told him I’d known him forever – it’s time we work together, let’s make a track. He said, ‘let’s see what you got.’ I played the beat for him, he said ‘I’m down. Let’s go!’ Bonnie Godiva is like a sister in the industry to me; she said ‘I’ll jump on anything you want, let’s go’. We ended up doing it, I told them the theme I was looking for and it just came together. It just worked and being in the studio was magical. The studio session was only 2 hours long, including the writing and recording (laughing).”

HNMAG “If you didn’t have those types of relationships, would it have been so much harder to create Hustlin?”

DT “Oh yes, most definitely! Relationships are key in our industry.  You’ll find that – sometimes even having the budget can’t get you into the same room that a relationship can. I’d definitely have a harder time making this song without those relationships.”

HNMAG “How do you know the Juno Award winner, Ray Robinson?”

DT “I’ve known Ray for about 22 years and was in one of his earliest videos after he got his first music deal. They needed a basketball player and I was 6’5, so he called me up and said he needed me in his video. I said ok, cool.”

HNMAG “I know that you love your city of Toronto but I also know that you moved to New York for a little while and were later mentored by Spice, of Platinum Dreamz about the ups and downs of the music industry. How much did that experience help to shape your career?”

DT “Both of those experiences put me on the path to success. Enough time has passed, I can talk about it now…  I did a venue/show in Toronto, where I filled the venue by myself and the promoter tried to stiff me from my money. I lost my cool a little and beat him up. My mom told me I needed to get out of there, so I moved down to my cousin’s place in New York. While I was down there, my cousin told some of his friends that I was a Hip Hop artist from Canada. He introduced me to a producer, a manager, I had an entire team and within 1 1/2 weeks, we had 3 mixtapes. We were on the streets of Manhattan, in Brooklyn and Queens selling CD’s. At one point I was making 1500.00 US/wk selling them. After being out there for almost 2 years, I moved back to Toronto and started working with Spice. She had already been signed to a record deal with Universal and she had seen the talent in me. She started bringing me places and introducing me to people – that’s when I really learned the craft. A lot of people decide they want to be an artist and all they do is rap. They don’t understand the business, what their brand looks like, what are their colours, how do things feel, what are people going to buy and when they go to your show – what are they going to experience? That really helped me to get that ‘behind the curtain’ knowledge of what makes an artist. Many people say, ‘that artist was an overnight success’ but they don’t realize how many of those nights led up to that success to appear like it happened overnight (laughing).”

HNMAG “You had said that the industry has changed. Has your music also evolved a lot?”

DT  “Most definitely, I used to be a boom bap rapping type of performer and now it’s closer to, what I call ‘party trap’ music. I don’t talk about drugs or those negative things – I talk about being motivated, making money and having fun. Nowadays I prefer the melodic rapping with that sweet hook, it’s making a comeback. It’s not just bars, bars and more bars on the top… I like to put a lot of surprises into it.  You’re listening to a track, then – wow, ooh… I wasn’t expecting that! (laughing)”

HNMAG “How important is it to surround yourself with the right people?”

DT “It is paramount! Your success is determined by the type of people you surround yourself with. You have to have a great team that’s going to push and inspire you. Otherwise, you can start getting comfortable and keep doing the same thing. You need to have honest people in the studio that can critique the work if it can be better, instead of others telling you, ‘it’s fire’ when it isn’t. There are so many variables that help to bring it together, similar to a relationship. Knowing a guy that’s a venue owner, knowing someone that can get you on tour, knowing someone that can get you financing to go on tour… is so important as an artist. It takes having a team and surrounding yourself with good people.”

HNMAG “If you were to give a new young artist some advice, what else would you say to them?”

DT “Surround yourself with a good team, before you find a manager – have something to manage. You have to have some skin in the game. Put some money into professional photos and shooting music videos, then set up a few different shows and release some music – build a Fanbase. Once you do all those things, then you can get a manager and start going out on tour and find financial investors. You first have to build your brand then build your team, and in that order.”

HNMAG “Do you have a favourite studio in Toronto where you like to record?”

DT “Yes, I like LYNX Studios. They have a pretty nice setup. It’s very affordable for young up and coming artists, it also has the quality most artists look for.”

HNMAG “Did you want to give a shout out to any producers you work with or do you produce your own music?”

DT “I have a producer that I work with exclusively, Da6ixx. I also had help from Beatzby1702 as well as AWOL Productions. Since the shut down of live events, its really slashed our income as travelling artists. Right now, I’m an essential worker, so once things open up, I’ll be heading out again, and be able to use my paid vacation time.”

HNMAG “Where is the first place/location you want to perform?”

DT “Straight to Atlanta. My music is really popular in Atlanta and then we’ll be setting up for Europe in the new year.”

HNMAG “Where can everyone find the new track, Hustlin?”

DT “It’s been officially released on Spotify, Apple Music, iTunes. You can find me and the song if you search DT The Artist along with Ray Robinson and Bonnie Godiva in Google.”

HNMAG “Looking 5 years ahead, where do you see yourself performing?”

DT “I’ll be doing a lot of music festivals and conferences but also scaling back the live performances in order to run my own business DTP Entertainment, where I’ll be creating opportunities for other up and coming artists. I’ll be taking them on tours and getting them on stage and into festivals.”

HNMAG “Can I ask you a few fun questions? What’s your favourite destination to travel to?”

DT “Saint Martin in the Caribbean. I’ve been there about 40 times. The 37 beaches, the weather, the food, the people. It’s amazing every time I go.”

HNMAG “If you could disguise yourself as anyone for a day, who would it be?”

DT “I think it would have to be Shaq (laughing). He has such a fun and hilarious personality that’s larger than life. I remember seeing Kevin Hart doing an impression of him and it was so hilarious! If it’s not Shaq, then The Rock. I have the eyebrow part down (laughing).”

DT The Artist is an incredible force. It was so eye opening and personal talking to him. The genuine article and usually the guy putting the star on top of the Christmas tree. The pleasure was all mine and I hope to meet him in person when he visits the West Coast of Vancouver, which he says reminds him of Brazil. It is a rainforest, my free car washes can testify to that.

The very best to you, my friend.