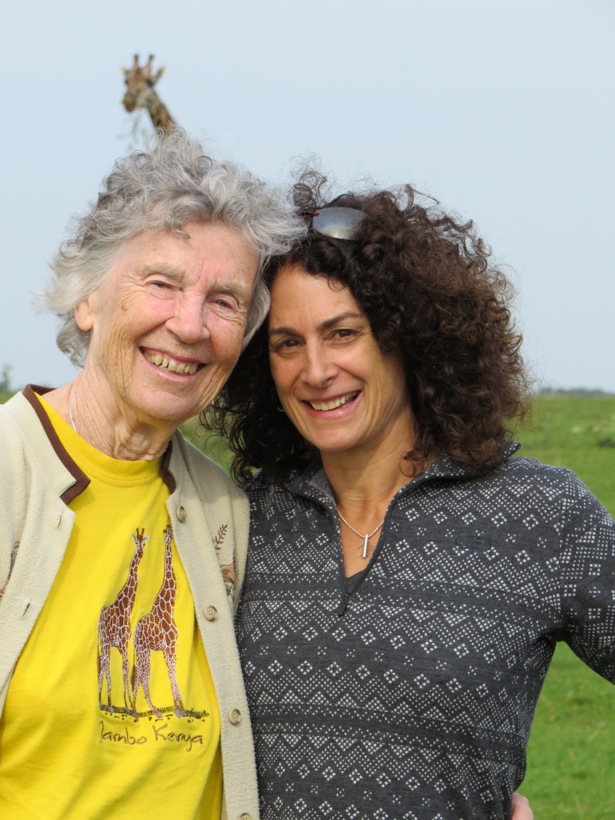 The world needs its heroes and Dr. Anne Innis Dagg is one of them. She is an advocate for the conservation of giraffes in Africa and an inspiration to so many others.  A trailblazer from a young age, she embarked on a trip to South Africa at the age of 23 by herself. It was a time when women were staying home and raising children and discouraged from having a career.

Writer/director Alison Reid presented The Woman Who Loves Giraffes in Vancouver on January 11, 2019 at the Vancity Theatre and in Edmonton on January 9th, 209 at Metro Cinema. It is an extraordinary documentary that begins with a curiosity with giraffes before turning into an underdog story of Anne fighting the system to be recognized for her contributions as well as seeking tenure. I’ve seen the film and it plays out very much like an award winning drama. It has every element of a suspense filled blockbuster that happens to be based on fact. Alison Reid captures not only the character of Anne but she uncovers a much bigger story in the process.

Alison Reid is an award-winning director began her career as a stunt coordinator and second unit director. She has 300 credits and formed Free Spirit Films to produce projects diverse in genre, but with a similar exploration of the human spirit. She has received the 2007 Crystal Award for Emerging Director from DGC/WIFT. Her Independent feature, The Baby Formula in 2009 sold internationally, won the Audience Award at the Inside Out LGBT Film Festival, Best LGBT Film at Nashville Film Festival and was nominated for the Golden Zenith at Montreal World Film Festival. Her television directing credits include Saving Hope, Heartland and Murdoch Mysteries.

We were very fortunate to talk with Alison Reid about her film from her home in Toronto.

“I watched this film and was inspired by the story. You really managed to capture the essence of who she is and the impact she’s had on giraffe advocacy.”

“It’s quite a story and I’m so glad to see how people are responding to it. We had just finished showing the film in Guelph, Ontario, which is where the university is that she was denied tenure from. It was quite an interesting Q & A.  The people have been so responsive to it and were horrified/galvanized by the treatment she received from the university. So much so, that they were inspired to write letters to the U of G. The Giraffe Conservation Organization has also been reaching out to us to say thank you. They have received a tremendous amount of donations coming in from Canada, which is quite gratifying. We have the GCO info on our website as well as at the end of the film.”

“It must be so rewarding to know that your film has had such a positive impact.”

“It is. This is my first documentary. I come from a scripted world of film and television. It’s quite a different experience to see people have a call to action. They’re going to see the film and talking about it afterwards, they’re also being inspired to act as well.”

“Making this film about Anne Innis Dagg, is really quite a giant leap in comparison to beginning your career in the stunt department.”

“There’s many ranges of stunts on a film and television sets. I’ve spent many days on a set as a stunt coordinator, not only coordinating large stunts with performers but also what we call ‘actor action’. That’s working with actors during action sequences because they’re many fight scenes and chase scenes that involve actors. Being a stunt coordinator very much involves working with actors as well as the camera department and other departments that the director would be working with. At first glance it might seem like a big leap but it was more of a natural evolutionary move for me. I’ve always had an interest in storytelling and did some writing many years ago on a television series called Captain Dog. As I got older I became more interested in the storytelling aspect of it, so it’s been nice to be able to make that transition.” “In the film you go back and retrace some of the footage that Anne shot on her 16mm camera. I thought it was extraordinary to be able to see the contrast.”

“I thought it was an incredible opportunity to go back to those exact places with her almost 60 years later. I was able to take screen shots of the 16mm film and send them off to the fixer we had in South Africa and ask him if he could find those locations. When they found the places, they sent me new photos to confirm it was the exact same spot. It was quite a unique opportunity to be able to do that.”

“Judging by all of the footage, it would seem that you’ve spent some considerable time together. How long did you follow Anne around?”

“I did, yes. I actually followed her around for five years. What you see in the film is really her new giraffe journey in the last five years and then going back to what she did in the 50’s.”

I find Anne’s story so fascinating. She had such fortitude to travel to South Africa by herself to study giraffes at a time of apartheid and at a time when women were being oppressed from having careers. She is quite a trailblazer and an inspiration to women and others that chase their dreams despite the roadblocks.

“How did you first become aware of Anne’s story?”

“There was a radio documentary on the CBC’s Ideas Program, as it’s called. After I heard it I was very inspired by her story. I thought it would make a great scripted film so I approached Anne and she was kind enough to give me the rights to her book, Pursuing Giraffe, along with her life story. I was about to embark on developing the screenplay and coincidentally I found out shortly thereafter that she was going back to Africa for the first time in all those years. I thought, OMG this is historic, we’ve got to go and shoot this, so I scrambled to make it happen.”

“Was it difficult to find financing for the film?”

“It took some time. There were some people that saw how important the story was right away. It speaks to so many things that are topical right now. I can’t say it was easy and had to bring the film quite far along before other people were able to see the value in it.  As the years went by I was able to generate interest. I self financed the first trip and the crew deferred their fees. As time went on and layers of her story started revealing themselves to me I was able to get more interest in the story. We have Telefilm Canada, Ontario Creates, Bell Media and the Rogers Documentary Fund. We were able to get some interest in her story and able to keep going.”

“Has Anne seen the film?”

“She has, she’s seen it many times. She watched it again today with the audience.” Anne Innis Dagg is now 86 years old. The film was turned down by Whistler and VIFF for unknown reasons.

“Was it strictly Anne Innis Dagg’s story that captured your attention or are you also interested in wildlife?”

“Of course I’ve been drawn to Africa since I was a kid but it was Anne’s story that really captivated me.  It didn’t hurt that giraffes were a passion of hers and that her trip to Africa definitely factored into that and intrigued me about her.”

“Has the film been shown in Africa?”

“Not yet but we’re very much hoping that it will be. We’ve applied to some festivals in Africa and hopefully they’ll say yes.”

“Has it been difficult for festivals to agree to screen the film?”

“Well yes and no. We’ve been surprised by some of the festivals that have turned us down. Hot Docs were behind us from the start. We don’t know why some other festivals turned us down but we’re getting it out there regardless.”

If you get the opportunity to see this documentary in your town, you will be emotionally moved, you will be enraged and you will also feel redemption for Dr. Anne Innis Dagg.