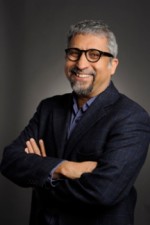 Being recognized for outstanding achievements is still on my bucket list. Whether that encompasses how many marshmallows I fit into my mouth at one time or saving someone from a burning campfire or a wild deer is setting the bar at a comfortable height. Sometimes we have to dig deep to find what we’d like to be remembered for.  It’s a personal journey and you are only competing against yourself. If you want to be recognized for something outstanding that contributes to society in a positive way with a global footprint, then you need to be dedicated, you need to be compelled and you need to raise the bar so high that only you are capable of reaching it.

I recently had the fortuitous opportunity to interview the outstanding documentary filmmaker, Ali Kazimi.  He has been creating documentaries since 1991. He is an immigrant with a fascination for history and social issues. His films have opened eyes, they’ve touched hearts, they’ve caused people to write letters to politicians and most of all, they’ve changed lives.  He studied filmmaking at York University in Toronto and is best known for his feature docs, The Continuous Journey about the Komagata Maru, where a ship carrying 376 migrants from British India were turned away in Vancouver in 1914. The consequences were felt throughout the British Empire. His latest impactful film is Random Acts of Legacy. He’s also made a film about fellow GGVMA winner, Jeffrey Thomas back in 1997 titled, Shooting Indians: A Journey with Jeffrey Thomas. He is currently the Chair of the Department of Cinema and Media Arts at York University in Toronto.

He understands our history and our politics. He is very accomplished and is being recognized for his Artistic Achievements at the Governor General Awards Ceremony later this month. He was very gracious to make time to speak to us from his home in Toronto. This is what we were able to extract.

“What is it that compels you to make so many documentaries as opposed to films?”

“One of my colleges in the Documentary Organization of Canada says the documentary is a Canadian national art form, and I think he’s absolutely right. For me personally, I make films about things that matter to me and I believe, matter to people as a whole. They are films on issues that I’m deeply passionate about that allow me to deepen my understanding of the world and my relationship to it.  At the same time I am also driven by a desire to tell stories that are also on the margins of awareness, either as a country as a whole or groups of people. Often the margins tell us what’s at the center and what the relationship is with the margin and the center. It becomes an issue of how history is told, how justice is dealt with, how borders are controlled/opened and what makes the country what it is. I’ve dealt a lot with the issues of history and the archives. I’m particularly interested in the moving image archives. As a filmmaker I’m fascinated by archival films and what they tell us about a moment in history or peoples lives. Often, what they tell us is quite different and richer than how history is read and seen in photographs. That excites me.”

“Is it correct to assess that you are searching for a deeper story than conventional history provides?”

“Yes… and my relationship to it. Part of what I’ve done is, I’ve been able to work in an essay style and my films often have a personal voice over. Not in the didactic sense but more in the sense of framing the story. I don’t see myself as an expert, but more as a guide. A guide that has a history, I came to this country as an immigrant. That shapes the way I look at the world and how I’m able to see Canada today. My films have been made with meager resources and often with budgets that are cobbled together with Arts Council funding. I’m able to work a bit outside the industry but still make films that are broadcast and broadcast repeatedly even after 15 – 20 years of them being finished, which is quite remarkable for a documentary.”

“They must be very relevant in todays world?”

“All of them have managed to stay relevant and I’ve always made them with the intent of reaching the largest audience possible. The great writer John Berger once described language as an act of hospitality. I’ve taken that to heart with my work. I want myself to be hospitable and to be able to draw the audience in emotionally but to be able to take them on a journey so that they see the world slightly different from the time the film started. In that process I want them to conceal something, I want them to engage in the aesthetic pleasure of the film. I want them to be transformed even in a small way. One of the things I’m also deeply grateful for is that my films continue to be used in universities. Students will tell me they’ve seen my film in a course and it really stayed with them.”

“I hear it often from filmmakers. that one familiar commonality is moving their audience emotionally. You definitely share that with them.”

“To make these kinds of films is an extremely hard process. I feel like I’ve been tested in the years that it’s taken me to make this work, all the time. There are times when I find myself questioning what I’m doing or doubting the ability of this work to reach someone. That’s when little reminders come up that restore my faith, my own abilities and my own assurance that this will reach someone.  One of my films, Continuous Journey, which is about the turning away of a ship in 1914 from Vancouver called the Komagata Maru really opened up the story to all Canadians but also within the South Asian communities it energized people to take on ways of dealing with this history. I was not by any means the first to deal with this history; a few historians have written books about it but I was able to reach a gentler audience through film. Fifteen years later, the film is still being broadcast on the Knowledge Network. It led to a groundswell in discussions around the Komagata Maru that contributed significantly to the apology that was given in Parliament to those events. I’ve seen individuals being affected and then making life choices based on what they’ve learned or how the film has impacted them. Small changes are so incredibly powerful and gratifying for me. I feel like I’ve been able to contribute to the cultural fabric of this country and I feel really grateful for it.” “Are you continuing to make documentaries?”

“Oh yes, I just finished a film that premiered at Hot Docs two years ago. It was a feature doc called Random Acts of Legacy and a TV version of it played on the PBS World channel in the US in the spring and it’s currently showing on TVO. I’m also working on two other ideas.”

“When you are considering a new subject to film, how does that process begin/look like and how do you put it before other compelling issues/stories?”

“Any film is really hard but making a documentary is even harder. I feel that I have to be completely obsessed with an idea. I have to have a complete desire and fascination to be able to withstand multiple rejections in terms of funding and possibilities and still be able to hold onto an idea. That to me is a test of any idea. Having said that, there have been ideas that I’ve had and wanted to do films on and I’ve hit a dead end with it and I’ve felt that I didn’t have enough belief in the idea to continue, so I’ll let it go. I’ve been teaching film production since 2006 at York. I know this film program from all sides. It’s the program that made me a filmmaker. Teaching there is a way of giving back to another generation of filmmakers, which is immensely gratifying but it also limits the scope of what I’m able to do and the kinds of films I’m able to take on. I keep telling my students that creative ideas can sometimes come from constraints. The constraints I have are time. Random Acts of Legacy comes out of my fascination on two fronts. One is the archival film and also the history of race and immigration in both Canada and the US. When I came across what I consider a treasure trove of home movies of a Chinese American family online, I immediately recognized that this was incredibly rare footage. These were 16mm home movies that were shot shortly after the depression from the 1930’s to the early ‘50’s. There was a family name and address attached to the footage and it’s the earliest known home movies of a Chinese American family that’s ever been found and can be identified. People have said to me, ‘nothing really happens in this film. They all seem ordinary’ but to me the ordinariness of a second generation Chinese family in Chicago in the 1930’s is precisely what made it extraordinary. I was convinced that in spite of peoples concerns about the project, I was convinced that there was a story here that was important. I’ve often said that it’s through the small stories that we often get to know the world. That’s been my credo; I look at the small stories, they allow me to deal with them with the limited time I have but yet to be able to tell a story that resonates with a wider audience that emotionally impacts an audience and allows them to see the word a little bit differently.”

“Would you say that you are more drawn to social issues than immigration issues?

“I see a deep connection between them but I’m interested in social issues, I’m interested in history, but I guess the overall bulk of my work is around social justice, whether its around issues of race or immigration. Those are factors that have affected my life and factors that I’ve lived and that have defined me. Having said all that over the last 10 years I’ve been running a series called the treaty lab at York. I’ve been very interested in exploring 3D, which in the industry has been dying out but I continue to work with it in a gallery format and in installations. One of the works that I’ve done that brings together my work in terms of history and archive; it’s called Fare Play and it’s going to be part of the Governor Generals Award Winners Expedition at the National Gallery. Once again, they’re based on early foundation history in Vancouver, so it brings together these documentary ideas with my interest in exploration and research in 3D Cinema and video/media installations.”

“Is this the first time you’ve embarked on 3D projects?”

“No, I’ve been working with it since 2009. This is an installation that I did that was first curated by Jordan Strom, who was the curator of the Fairy Art Gallery in 2014, which was for the centenary of the turning back of the Komagata Maru. It showed at the Fairy Art Gallery and now it’s going to be at the National Gallery. In that time I’ve also done four other 3D installations.

The pleasure was all mine and I am so very grateful for the opportunity to speak with Ali Kazimi and wish him the very best I his continued success and the Awards Ceremony.