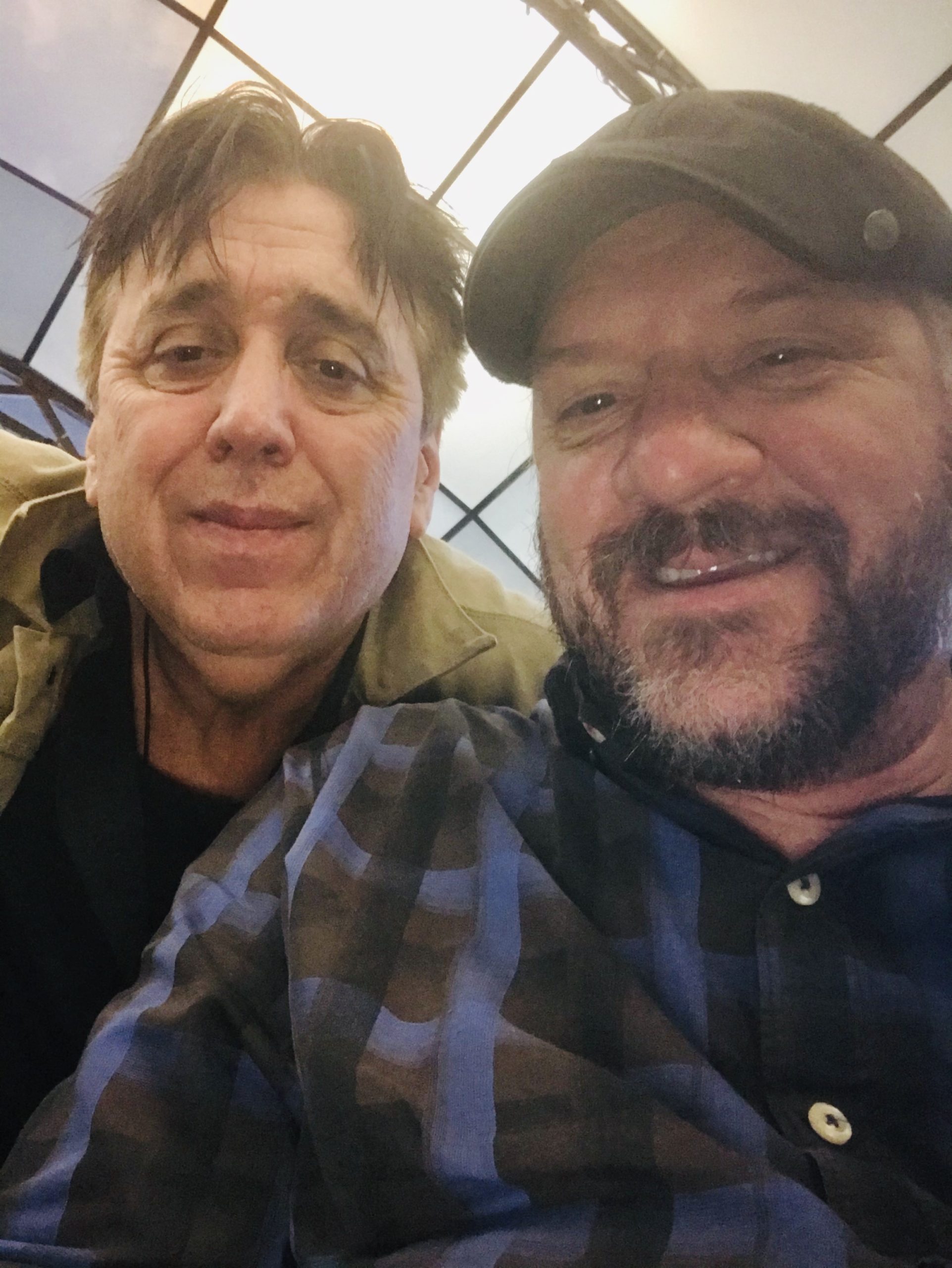 When you think of book adaptations turned into movies it’s usually novels that come to mind… but there is always the exception to the rule. Allan Hopkins and Kate Kroll have teamed up to make the film, Shin-chi’s Canoe; Allan as co-writer/director, Kate Kroll as co-writer and Producer. The book is very popular within the Indigenous population and it was just a matter of time before somebody took up the torch to shine a light on a dark history.

I recently had the great pleasure of meeting up with Allan Hopkins to discuss the film, the book and what’s next for him and his films.

“This film was based on a book?”

“I understand that you have a personal connection to this story. Can you tell me about that?”

“I’m half Indigenous, from a tribe called N’Quatqua and part of the St’át’imc Nation, the Lillooet People. That’s past Whistler to Pemberton and Mount Currie. I spent a lot of my youth up there on the reserve. Nicola Campbell is an Okanagan woman that studied her Phd at Fraser Valley and wrote the children’s book. I interviewed her years ago about her book when I was a producer for First Story at CTV. It was a show that focused on Indigenous People, politics and issues. Kate Kroll (producer) who has the rights to the book and had approached me to direct the film and collaborated with me on the script from an adaptation of the book. I followed really close to the narrative, so it’s not my story but rather Nicola’s story. It’s about the general experience of a residential school in the early 1960’s.”

“Is there another film on this book?”

“How did you finance the production?”

“I think we got the very last Bravo Fact grant, we got some more money from the Arts Council and a little more money from Creative BC. We shot the film in 3 days in the valley. It rained every day and we filmed primarily outside on the water but on the second day we filmed inside the school quite a bit. We had two more shoots outside on/near the water and did most of the shooting outside.”

“How difficult was it to try to depict 1960’s and had you tried to depict an earlier time before?”

“No I hadn’t but we had a good wardrobe person that had the right clothes from that era. We also had old cars and the residential school is still standing. As far as my personal connection goes, my two maternal grandparents went to the same residential school where we had shot in Mission. I felt a great responsibility and honour to take in the history. I could feel the presence of the people that had been there throughout history and it was a very interesting experience.”

“How many actors would you have used in the making of the film?”

“I had read that the film had gone to Cannes?”

“It did but not in the competition section. It went to the Short Film Corner with a lot of Canadian films as well. It was a great experience to be in Cannes, it was fun it was crowded and an unforgettable experience.”

“How long did it take to make the film including pre and post production?”

“I think we were in pre production for a good 6 weeks. Post-production probably took about 2 months, maybe more. In Indy filmmaking a lot of people are working on several projects so there was a lot of start stop scenario happening. When you’re not paying people a ton of money you have to accept that they’re going to be working on other projects at the same time. It was actually a lot of work for 15 minutes of film.”

“How long did it take for you and Kate to co-write the script?”

“That’s going back to 2017 when we first started writing it but I believe it took 2-3 mths before we finalized the script. Nicola also had a say in how it turned out.” “Considering this was based off of a children’s book, did you have to create any extra scenes in the film?”

“There is one extra scene that I put in there. It’s where a couple of kids meet each other in the gym but that’s about it. I wanted to stay close to the story. I have had some problems in getting it into the programs at the festivals because it’s not a traditional adult narrative. The kids go to school, they’re at the school and then they go home. That’s the story. That is a typical 5-8 yr. old scenario. There are only about 5 lines on each page of the book. It’s a very simple narrative with none of the typical kinds of incidents you think of when you think about residential schools. There’s no physical abuse, no sexual abuse, there might be some slight emotional abuse in one scene. It’s for children to help them to begin to talk about it.”

“Because I’ve not had a screener to watch, can you give me the premise of the story?”

“The kids have to go to a residential school so a white man comes to pick them up in a truck but before they go they ask their father to make them a canoe. They’re a canoeing family and in their tradition canoes were very big and still are. They make the canoes, they race the canoes, they use the canoes for recreation and canoe for sport. The kids want a canoe so the dad gives the little girl, Shin-chi Etco a tiny canoe and along the way to the school she gives it to her little brother Shin-chi who hides it. All the time that he waits to go home he takes it out and smells it, plays with it and the canoe becomes his link to his home and culture. Near the end of the term the kids go home and their dad has made them a full size canoe. In some ways it’s a hopeful story because there is a return and the kids have gotten what they want. It’s a little bitter sweet because the kids will have to go back to the school. I hope it’s uplifting and I really want kids between 5-8 to watch the film and understand it without being traumatized.”

“Where is your hope for the film to be seen?”

“It’s having its festival run now; it’s been to New Zealand, it was at Cannes, New York and Toronto. We weren’t able to get into Vancouver, which is a real shame but it’s at Whistler now. We’re going to be pushing it to getting it on a TV network like APTN or CBC and we also want to get it into the roam of education as well, the school curriculum these days are required to teach Indigenous studies and part of that is discussing residential schools. The festivals have almost wound down but it will have a continued life at schools and possibly on TV. It’s a small film niche film and focuses on one area and might not be busy enough in the way of a huge life but I’m really proud of what it has done so far and I want more people to see it to begin to understand and to begin a dialogue about residential schools and the legacy of it/what it was like for kids to be there.”

“Was it difficult to get permission to film in the school?”

“It wasn’t because the Indigenous community in Mission now owns the school and were happy to let us go in and shoot. They thought it was a great idea. Every Indigenous school knows the story of Shin-chi’s Canoe. It’s a book that parents and kids know; many families have it and it’s well known in that circle. It wasn’t a big problem to shoot there.”

“How old is this story?”

“I think it was written in 2008. I believe it won several awards and was nominated for several more.”

Allan continues, “Kate Hopkins is local and will be coming to Whistler too. The editor is coming as well, his name is Jeffery Lando and we were very lucky to have him. He’s an excellent editor. There might also be some people coming up from Stó:lō.”

“Did you try to add traditional music to the film?”

“Not necessarily but we did find a composer, Jason Burnstick. He’s an Indigenous artist that does a lot of performances on slide guitar across the country. The film has a lot of guitar in it that’s a little poignant, a little sad and a little emotional. It’s not traditional because it’s not really a traditional story. It’s a story about people having a system imposed on them.”

“What is your writing/film background?”

“I went to SFU and studied Communications. I’m currently in UBC doing an MFA in the Creative Writing department and I’m studying screenwriting but also short fiction.”

“What types of stories do you hope to tell in the future?”

“I’ve just finished a feature film that’s a comedy called Indian Road Trip. I’m going to be delivering that to APTN in 10 days and I’m also writing several other films. I think of myself as a writer/director and not entirely interested in directing other people’s work or writing for other people. I write my own work and I direct my own work.

If you’re going to be going to the Whistler Film Festival please take in this very Canadian film. Wishing the film much luck, many accolades, awards and a great audience.