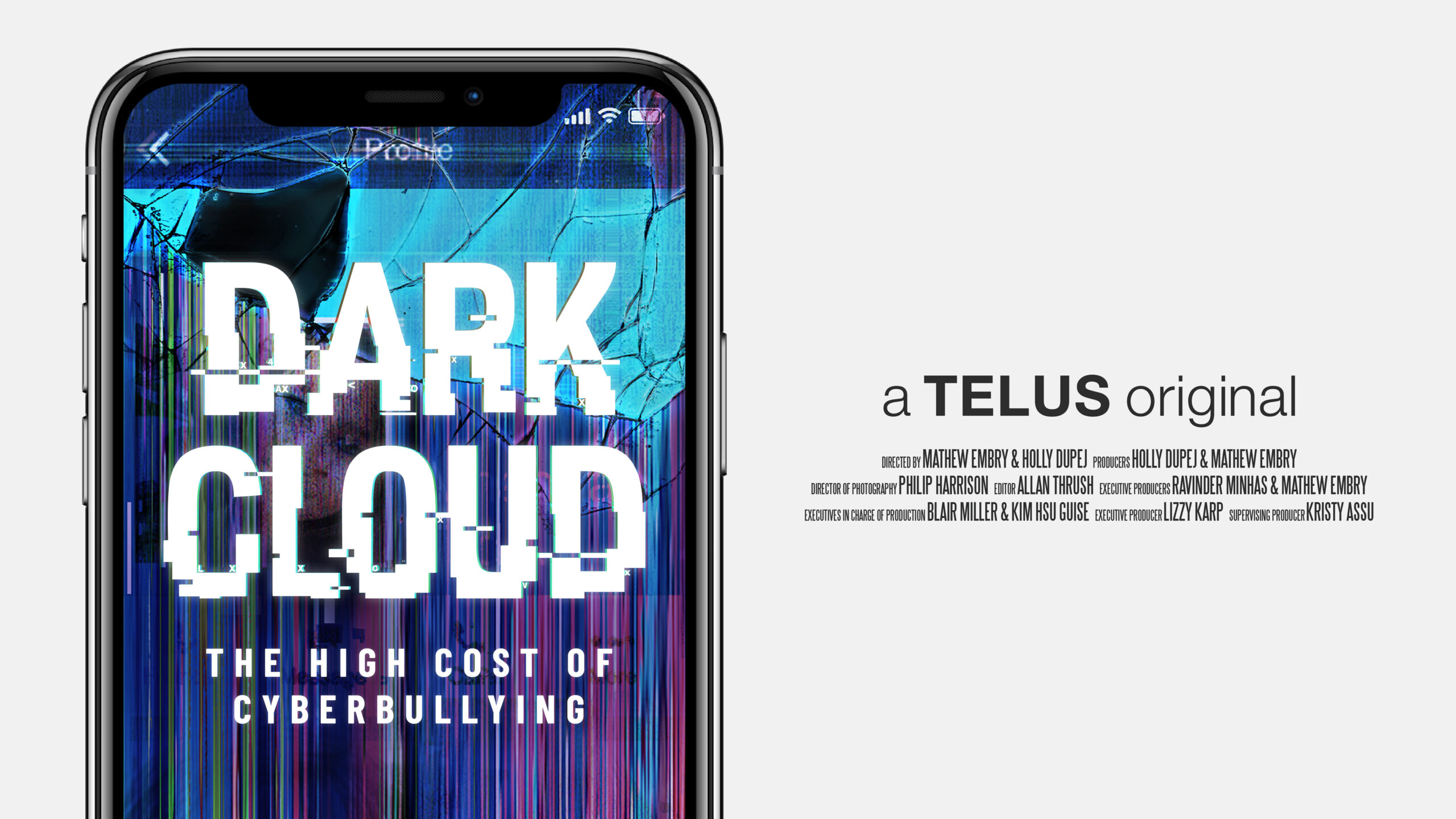 One of the main subjects that’s often covered (and sadly not covered enough) is bullying, a very big problem everywhere, for years even. I was subject to some myself, on both sides even. I’ve seen it in so many places for so many years. It’s bad enough it happens on the school grounds, but on the Internet is where it can get extremely dreadful. It was a major issue in an online drama I used to witness for months, and it’s one of those things that is around no matter what. It’s mainly caused by different viewpoints and such, personally I think different viewpoints make the world interesting. But maybe, just maybe this will be the year that judging, bullying, and harassment get even less common, I hope (Seriously, can’t people look on the bright side in this pandemic? I am). Recently, Telus released a documentary covering cyberbullying made by Holly Dupej and Matthew Embry, who worked together to make a compelling convincing work of facts to educate people in the best way possible. I spoke with Matthew as he told me about the process of Dark Cloud and said lots of interesting facts. From getting to know him and those he worked with, I can safely say we can get along with each other. With that being the case, I hope everyone will with each other someday.

HNMAG: How did you and Holly divvy up the work of directing and filmmaking?

Matthew: Holly and I have worked together on other projects and one thing that’s misunderstood is the creative aspect of research. On the last project we did together (Painkiller inside the Opioid Crisis), she was the producer on that and I was the director. Her creative input was helpful on that as well. When this project, we both had to be in the field at different times and when a director and producer get close together, they get a sense of a style and an approach. We shared that and were able to divide up the work in the field as well as in the edit suite.

HNMAG: So you’ve worked together on projects before? Is it common?

Matthew: Yeah, I think Painkiller inside the Opiod Crisis was the biggest project we ever worked on. But she weighed in on various other projects I directed and I really take her opinion and creativity seriously.

HNMAG: Were there any other jobs you did besides co-direct and co-produce?

Matthew: I also work as an executive producer on that side too, and when it gets to the edit suite, all of us at one level are writing. That’s such a wonderful process to adjust the film to how we see fit.

HNMAG: Now with producing and finances, how did Spotlight get involved?

Matthew: I’m one of the owners of Spotlight Productions, and we’ve had a wonderful relationship over the years with Telus. These projects grow out of synergies and conversations together.

HNMAG: What kind of camera was used for filming?

Matthew: I think we shot on the FS7.

HNMAG: So how did it help with the shoot? How would you describe its performance and quality?

Matthew: I LOVE that camera! It’s 4K and very ergonomic for our shooters. It’s versatile, and on the post-side, we were able to work with that footage quite nicely. We cut in Avid, using a SONY product, those things worked very well together. HNMAG: Bullying certainly seems to be a big issue no matter what. Do you feel that maybe this will shed some more light on the subject maybe more than past productions?

Matthew: I hope so, I think that this film can really reach people as we’ve got Carol Todd. Her part of this is her story of Amanda Todd killing herself which is internationally known. She’s a character that’s passionate and well spoken, and she’s so giving in how much access she gave us. That was incredible to be in a little part of her journey and I really hope we captured those moments in her journey where she reflects what’s happening in her heart and to share that with the world, you hope that starts to carry.

HNMAG: Do you feel cyberbullying is much worse than regular bullying?

Matthew: (sighs) That’s a tough question, I think all bullying is a major problem. One thing about cyberbullying that is different, is that it can be 24/7. That can be relentless. It’s how to escape from it, how to shelter one’s self from it. Another aspect is that it can live forever online. They seem to be similar for sure, but cyberbullying can attack in different ways.

HNMAG: It can be a struggle when you’re talking to subjects who have suffered abuse, bullying, or even lost their kids due to bullying. Did you have to be careful in what questions you asked them?

Matthew: I think that interview processes need to be very delicate in not re-traumatizing people. This reality is getting talked about more and more in filmmaker’s circles. In my own experience, I’m trying to be mindful of that, especially over the past few years. Even being on the other side of the camera, I understand how hard that can be.

HNMAG: Do you feel you’ve learned a lot more since you’ve talked to these subjects through the documentary?

Matthew: Definitely. One wonderful part of being a documentary filmmaker is you get to learn so much. You get to talk to people in the top field, 1 on 1, and you get to meet people who are really dealing with it. Whether they’re victims of it or people trying to stop it. The amount you learn, when you’re talking to that caliber of people, it really opens your eyes. You get the key information that people can utilize in their own lives.

HNMAG: Is speaking out against bullying tough at times? What’s the best way to go about it without being too harsh?

Matthew: I think speaking light and goodness into the world can often be a challenge. What I try to do is shed some light on the problem, but at the same time try to show people some real world skills on how to solve the problem. The last thing I want is for a viewer to throw their hands up in the air and say “Oh, the world is in big trouble, there’s nothing I can do!” I want people to watch our projects and say “WOW. That is a MAJOR issue, I can do something today and start changing that.”

HNMAG: And how did you manage to choose what subjects to talk to and why?

Matthew: We started off with knowing we wanted to talk with Carol Todd, we knew of her previous relationship with Telus. After that, it was a team effort with us, and Telus to find key characters and connections with Carol. It was an organic process which was able to grow and that’s the wonderful thing about documentaries. You have a plan at the beginning, and then you see where things you lead you. Plus the people we talked to, were brave enough to share their stories. HNMAG: What was one of the toughest challenges of shooting the documentary?

Matthew: Hm. One of those was how you create scenes around this. I mean, cyberbullying is something that happens largely, it can be anonymous behind closed doors, it can happen through phones. Finding those ‘action’ moments weren’t easy. If you’re shooting schoolyard bullying, you can probably capture that. Cyberbullying is a different thing, scenes that you’re looking at phones, or talking about things that already passed, you can’t capture the real thing which is sometimes the beauty of documentary. But at the same time, we were able to find really compelling scenes watching people work against it. Whether that be someone talking to people about it, or at a conference in action.

HNMAG: How long was the entire process of shooting the documentary?

Matthew: Oh my gosh, we did some test-shooting nearly 2 years ago. Then once you have everything else, you start picking away and when you have an action plan, you go. It was over a fairly extended period of time but constantly shooting for over a month.

HNMAG: How did you choose what to keep and what to leave out? It must’ve been a difficult process.

Matthew: That’s the art of the edit process. That’s why we were so lucky we worked with great editors, writers, and there’s lots of scenes that hit the cutting room floor. One thing about working with Telus and the Telus fund, which helped provide for the marketing of the project. We were able to take some of that footage and recut it and repurpose it as little mini-stories that are available too. Like Bonus scenes on a DVD.

HNMAG: How does it feel to be released and showcased by Telus?

Matthew: Telus has been such a fantastic partner for us, now AND in the past. For a filmmaker to have his film played, especially in Canada at a time like this, you just can’t get it in front of people. What Telus does to put it on their VOD, it was on the front page this weekend. I’d love to see where it goes next and for you to cover this, I just appreciate it.

A great documentary, a great topic with great subjects, Dark Cloud has everything to educate you. Watch it today and learn a thing or two, but more importantly, spread it around. The more people know, the better. It’s like I say “What you don’t know can and will hurt you.”