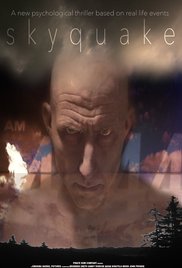 If you are an inquisitive individual that can’t turn away from a good mystery, you might be familiar with the premise of Skyquake. It is a spectacular movie written, directed, produced and starring actor Sandy Robson.

I caught up to Sandy to hear about this enticing mystery film that begs to question what is going on in our skies under our noses all around the world. Another question mark in the film deals with depression and the consequences of descending into that dark abyss. What is reality and what is brain chemistry swimming in unchartered fluid?

I had the unique and honored privilege of viewing a screener. I was drawn into the inciting incident and buckled up for the twists and turns that presented every answer with an additional question. Just when I thought I had solved the riddle in the movie, it takes another turn and enters a dark tunnel. I enjoyed every minute and confess to ignoring a few calls from my phone until the film had ended.

“I remember hearing about these strange sounds in the news years ago from various places around the world. Had any other filmmakers addressed the mysterious phenomena?”

“In my research I hadn’t seen another film doing it. I was anxious to be breaking new ground on the subject of these strange noises of unknown origin. In doing so I also wanted to delve into the subject of depression and what is perceived once a crumbling reality caves in on itself.”

Sandy Robson used his home in BC as a location as well as the well-forested greenbelt surrounding it. His young son took on the role of the eight year old boy in the film. You could say it was a bit of a family affair. His mother-in-law acted as script supervisor and his wife supplied wardrobe, set design and catering. His eighteen yr. old nephew Keaton House created the musical score and a second cousin also provided a couple songs to the film.

Sandy lost more than thirty-eight pounds for the film. He didn’t realize how his health and energy levels were going to be impacted until the ten days of shooting had been complete. In addition he also shaved his eyebrows off to convey the characters unbalanced wellness. A level of acting and submersion into character rarely seen in film.

Michael Taylor came on board as executive producer in April of 2014. Sandy had the script finished by June and the very talented/dedicated cast and crew of thirteen were composed in August. Ten days of shooting began in September. Sandy also edited the film and completed it while employed fulltime. He has a background in Adobe premiere, Photoshop, After Effects as well as Art and Advertising.

“The images look great. What camera did you use to  capture it all?”

“We actually used an RED Epic. Its capable of capturing in 5K. The technology allowed for easy transport and setup, eliminated bulky cables, easy storage and quality matched by higher end cameras.”

Once editing was completed, they started putting it out in 2015 and had their World Premiere at the Boston Sci-fi in Feb. of 2016 where Sandy Robson won the best actor award. After that it was onto the Crypticon in Seattle. It won best feature.

“We are very pleased with the film and were so fortunate to have an amazing cinematographer, Byron Kopman and an incredibly committed crew. Our last day was an eighteen hour stretch. On Indy films, you find 90% passion and invested interest unlike bigger sets.”

They have recently finished negotiations with an unnamed distributor. The work has begun on the deliverables. Supplying and separating soundtracks from sound effects, providing metadata sheets, reprints, etc. For a first time feature filmmaker, it can be daunting.

If the audience is talking about the film after leaving the theatre, Sandy knows he’s done his job correctly.
I thoroughly enjoyed the film with all of the twists and unknown destination. I know other audiences are in for a treat.

One thought on “Exclusive – Skyquake Brings It Down To Earth”