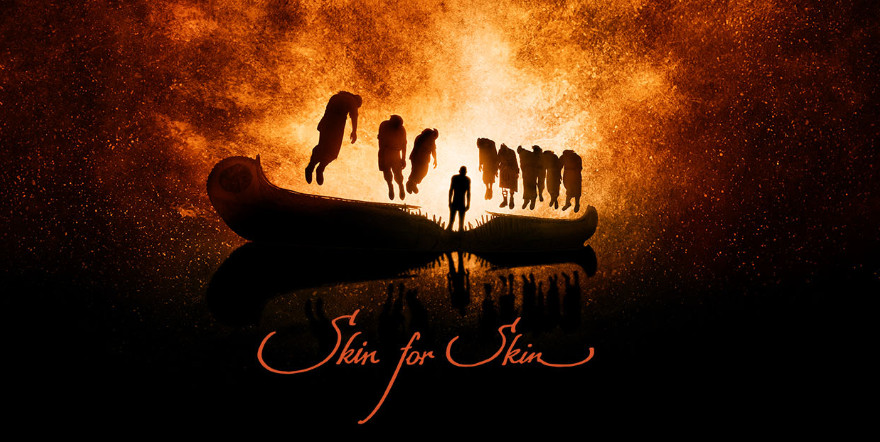 Much of the worlds mythology is based on history. However, Canada does not have much mythology associated with it. Kevin D.A. Kurytnik wanted to change that by creating an animation that encompassed one based on early fur trade.

The animation Skin For Skin was created by Kevin and a team of talented animators. He was co-director on the project. The film illustrates the hardships of early fur trading in 1823 and the first governor of the Hudson Bay Company, George Simpson. The illustration is brutal and carries many lessons throughout, regarding corporate greed and its obsession with wealth and total disregard for the environment.  The overall look has been described as Canadian Gothic.

I was fortunate enough to catch up with Kevin D.A. Kurytnik in Calgary, where he teaches animation at the Alberta College of Art and Design.

“How did this amazing animation come about?”

“We initially pitched the idea to David Christensen at NFB in Edmonton. He told me to go outside my comfort zone, so we did.  With this particular animation, we were originally going to do a cut out animation, a flat film. We were going to use Maya (animation software) for puppet animation, a 3 D program that Pixar, DreamWorks and other studios use. We wanted to use it to do a thing called Prevus, where we could create a choppy canoe with ten characters and stage them all inside Maya. As we were doing that we realized we really liked working within the 3D realm, and that canoes are tricky to draw. You need a model to pull it off. One day a student of mine came to class with a 3D sculpture of himself in digital form. You could rotate around it on the computer. He had made it in ZBrush and pasted/slapped a photo of himself onto it. It gave him the idea to take his storyboards and wrap them around the ZBrush forms. The reason it took so long to create the film is because it took 3 years to learn the programs, ZBrush and Maya. We really went old school with wrapping storyboard pencil drawings within the 3D programs. People don’t do it that way anymore.  They tend to paint directly, but when you do you end up with a plastic looking result and we wanted our stuff to look like an illustration.”

Kevin explains, there is a lot of mythology in the history of Aboriginals but very little mythology on Canadian history for the immigrants that came here. The Americans are great at it. Davy Crocket, George Washington are just a few with mythology attached.

“We began to create our own mythology about the early creation of Canada. It naturally led to the fur trade. We had tasked the team at the Edmonton NFB office with researching the history of the fur trade. They are accustomed to creating documentaries so they were naturally excited to be on board. One of the things they had discovered was, the first governor of the Hudson’s Bay Company, George Simpson had consolidated the North West Company and the H.B.C. and basically took over everything and put the headquarters at the southern tip of Montreal Island. His mansion is still there. The trading post is also still there. The governor and his team would travel from the South tip of the island, down to the St. Lawrence River and then down to the Ottawa River to the Mattawa River to Lake Superior. From there they’d canoe to other rivers and areas.  It would take about 4 months to cross the country. They would visit every fort along the way and George Simpson would have his hiring and firing book along with him. He’d be paying attention to everything. He had the best team in the land consisting of Metis and Aboriginal men.”

A few other interesting facts Kevin and the research team had uncovered was, after mapping the number of forts along Peace River and northern Alberta they discovered between 20-30. The Hudson’s Bay in Winnipeg has all the records from 1670 when the Hudson Bay was created. They actually have every record of every animal, as well as every hire and fire. Astonishing. It is a monstrosity of ledgers and diaries. Another interesting fact they uncovered is that the company preferred their men were unable to swim. There is no explanation for it, but Kevin and the team hypothesized it was because swimmers would be willing to take more risks which could result in taking more risks in the canoe and losing furs. To bring hunting numbers to scale, in the year 1823, 2 million beaver were trapped. Much of the population was wiped out over greed. 90% of the beaver went to waste.

The short film has been well received in the 2 ½ months since its completion. It’s won awards in Calgary and Edmonton before arriving in Vancouver. It took six years to create with Kevin contributing part time to the project as he maintained his full time teaching position. The team had been working full time to create an incredible looking piece. Nic Wassill from Vancouver is a 3D modeler and a major part of the story team.

“How long have you been working in animation and where did you learn your craft?”

“I’m actually self taught and have been doing it for 36 years. I did take an animation course in Calgary but didn’t learn too much and ended up teaching the class the following year. Before taking on this project, we used to do work for clients. We had made a historic film years ago for Peace River. So for this project, we went back to our client works from many years ago where we made a heritage piece on the history of Peace River’s history of the land, the fur trade and the Catholics showing up with the oblates. It turned into a twelve minute animation and I was the animator and director on the project. It’s still in Peace River and can be seen at the Fort.”

One more very interesting fact about the film, is it was originally going to be called True North. They weren’t married to the title and had realized that at the bottom of the Bay crest was some words written in Latin. Upon some further detective work, they had discovered it translated into Skin For Skin.  Digging deeper into the origin of the Latin phrase, they had discovered the words came from the book of Job. The words were actually uttered from Satan in reference to man. In that ‘a man may give up everything he has to save his life.’

What is so ironic is that the H.B.C was the first company to become incorporated.  All the problems with the idea of corporation stem from that and the logline associated with it originating from Satan himself. Very intriguing. They found it utterly fascinating. It also represents transformation since the governor in the film is torn apart and put back together., so the title really works well on a bunch of different levels. I just hope it doesn’t act as a bad omen, such as history has shown.

Kevin says the story became easy to structure once they grafted the real events of George Simpson travelling by canoe into the events of a poem, The Rhyme of the Ancient Mariner. In the poem, the mariners are lost in a storm until an albatross leads them to safety. Once the storm has cleared the mariner shoots the bird and all hell breaks loose. The moral of the story, don’t mess with nature. He says the poem also helped to give the story structure.

Kevin realizes the film is open to interpretation and loves that everyone can digest what they want out of it. He also mentions that the NFB has hinted that they may use the animation as a teaching tool and may become part of the curriculum in high schools.

In order to make the canoe in the animation look realistic, they digitally made a full scale 35 foot birch bark canoe that they plan to donate to a museum.

The film was produced by Bonnie Thompson and Carol Beecher and executive producer was David Christensen.

Kevin and Carol have been exploring the art and craft of animation for thirty years and since forming their company Fifteen Pound Pink Productions, they’ve collaborated on 15 animated works which have earned them more than 15 awards.  There will be a screening at SPARK on Oct. 29.

Skin for Skin from National Film Board of Canada on Vimeo.