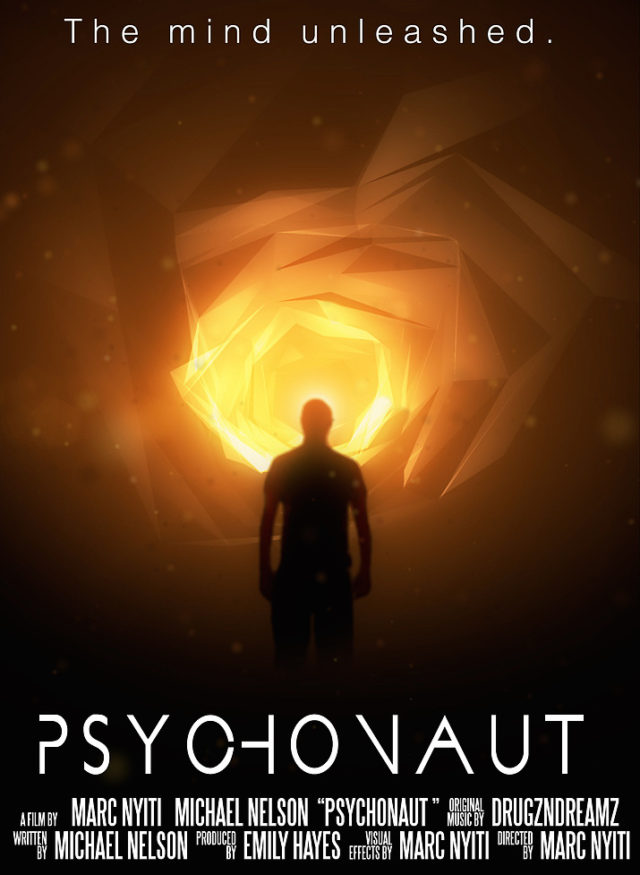 I recently had the great pleasure of sitting down with newly crowned filmmakers, Marc Nyiti and his partner Emily Hayes. Their film Psychonaut is a wrap and in the can. They told me it all happened very fast. A bit of a whirlwind. Considering this is their first film, and it’s a feature, raised my eyebrows and caused the gum to fall out of my mouth. I regained my composure to ask a few questions.

“What is the premise of the movie?”

“It’s a man’s journey to try to find spirituality. Within the journey, it is peppered with politics, religion and world views.”

“How did the idea come about?”

“I had the idea a couple of years ago. I’ve been playing in a band, DRUGZNDREAMZ for the past five years and was going to make music videos for a new album we made. Emily and I had discovered the Cinecoup film contest that awards the winners $1 million to make their film. We had a what-if moment and decided to try to win the contest. I co-wrote the script with Michael Nelson. He’s the lead singer in my band as well as lead actor in the film.”

The contest consisted of multiple stages of advancement and deadlines for particulars. In the time allotted, Marc and Emily had produced a mock up trailer, a poster and full script. They had advanced to the third month of the competition before being bumped out. Despite not securing outside funding, they made the decision to keep the momentum going and finance it out of pocket. A huge undertaking for first time filmmakers.

Emily Hayes has had some experience working on movie sets in her younger years but has been known as DJ Emilita for the past five years. Marc Nyiti has made some music videos and has some experience in VFX. They had a big hill to climb.

Emily produced it and handled all social media and marketing. Marc co-wrote, directed, operated the camera, sound and edited it.

“Where did you find your cast?”

“We found most of them on Craigslist. Because of budget constraints, we had to avoid union actors. The female lead was one of the toughest roles to fill. We had been conducting video auditions when she contacted us from Mexico via Skype. Living in Vancouver, the actress was away on holidays when she heard of the open auditions. She read for the part and nailed it.”

In total, there are eight key actors and 10 extras. Marc and Emily express how grateful they were to have such committed and dedicated actors on board.

They started shooting in July 2015 and were wrapped 22 days later. They used approximately 16 locations in and around Vancouver including the Sunshine Coast, Howe Sound, Lower Mainland, the bookstore Spartacus and two warehouses primarily used for green screen effects.

All locations were free to use in exchange for credit in the film.

“We were so impressed by the generosity of everyone that helped out. It’s surprising how much help you can get by asking.”

One hiccup they came across was realizing half way through the filming that their lead actor was moving out East. This forced them to speed up production with no time to waste. Looking back, they say it was a great motivator. In fact, in financing the film themselves, they finished their film before the contest winners.

Their budget for the film was approximately $8000.00. They provided meals and beverages for everyone working on the film. They also covered parking costs whenever necessary. Despite many people stepping forward to fill crew positions, it was difficult to secure crew for the duration. Marc was reduced to a two-person crew for the most part.

The film was shot on Black Magic Pocket Cinema 2K, capable of capturing RAW footage. Marc also incorporated a vintage 1960’s zoom lens into the camera. Post-production took approximately six months with five of those months dedicated to VFX. The soundtrack is provided by DRUGZNDREAMZ’ latest album which is said to complement the film marvelously.

Much of their combined film experience has been accomplished by watching Robert Rodriguez video tutorials as well as other DIY filmmaking videos.

Emily expresses that there is a clear difference between music and filmmaking. She found that there are so many people in the film industry willing to collaborate without hesitation.

Since completion of the film, they have submitted it to festivals in Toronto, NY, LA, Whistler and VIFF. The trailer will be completed next month.

Considering the many factors which put the production under the gun, they embraced every obstacle and persevered. They are very eager to make their next film and adjust the budget to reflect a larger production. They are hoping to crowd fund but also state that they won’t let the lack of financial support stop them from moving forward.

The record label behind the band is Axis Mundi Records out of New York.

If I could pass on the essence of the positive energy both Marc and Emily possess I would sum it up as reaching for the stars, taking that leap of faith, running with the ball and not missing the boat when inspiration reveals itself.

I am anxious to see this film.