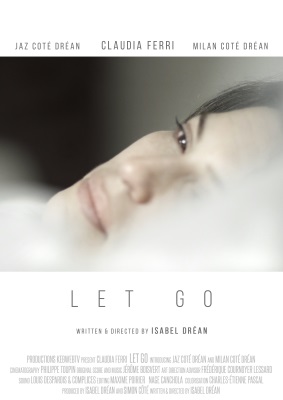 Isabel Dréan started her career as a broadcaster before moving onto producing then directing. She is best known in Quebec for her very successful web series Manigances. The series has 500,000 followers. It’s won multiple awards and has gone onto sell many DVD’s. Recently, it was also picked up by a network in the US for a second season. Incidentally, Quebec’s population is six million. Very impressive!

Her latest film, Let Go deals with the emotions and pain a parent goes through with the loss of a child. The actress that plays a single mother in the film is Claudia Ferri, better known for her work in Mambo Italiano and Unite 9. She is a well known actress in Quebec and has children of her own. In a crying scene, Claudia endured fifteen minutes of heightened anxiety and gut wrenching emotional collapse. A true professional that dug deep for an amazing performance. She forewarned Isabel that she would only do one take. After the completion of the scene, Isabel found herself crying because it impacted her emotionally.

The film took six days to shoot and a crew of seven. Most of the crew had worked on previous projects with Isabel. It was captured on the Sony F300 and the Canon 5D.
Isabel raised part of the funding through Indiegogo.

Her children are Jaz and Milan Drean. Isabel found herself bribing five year old Jaz with Lego to complete his scenes. Too funny.