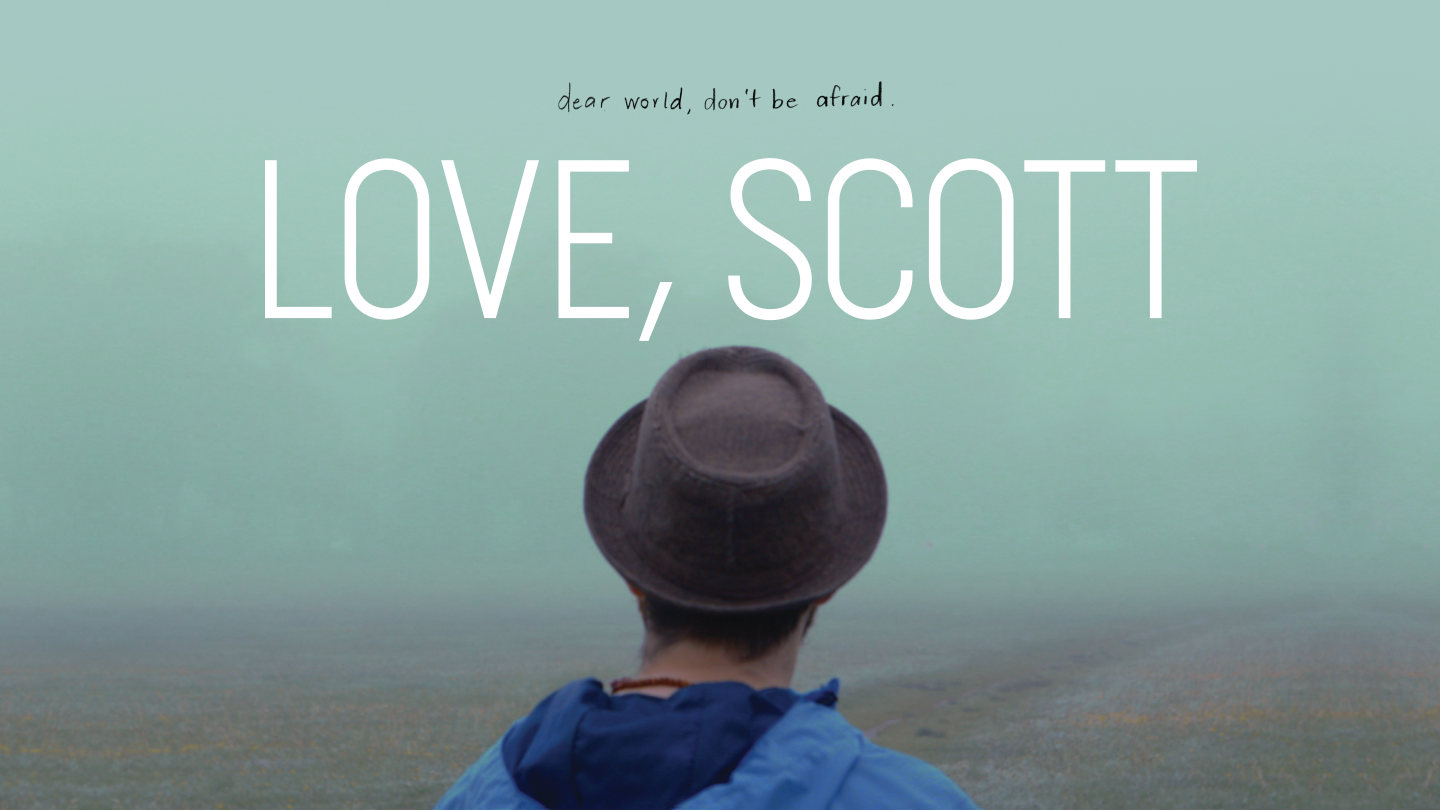 Some would say it’s our differences and diversity that makes us a great country. In every great country however, there is a small population that are not willing to live beside a neighbor that is different from themselves. Those differences may include which country you were born, what colour your skin is, your religion and your sexual orientation. Imagine walking a day in someone’s shoes that face constant judgment or harassment daily. The struggle is real and the assaults are verbal as well as physical. Having to look over your shoulder or become a prisoner of your home are choices that people in minority groups face most of their life. Being afraid of societies harsh judgment is no way to live.  We’re better than that and we need to lead by example or democracy will not survive.

One night while walking in small town Nova Scotia, Nanaimo born Scott Jones, a gay musician is attacked and stabbed in the back. His life would never be the same. His spinal cord had been severed by a knife, thrust from a man he had encountered earlier in the night. He was left paralyzed from the waist down. His very close friend and filmmaker Laura Marie Wayne documents his first moments in the hospital and continues to follow his adversity/tenacity/progress for three years throughout her first documentary feature Love, Scott. Can Scott ever embrace love again or will fear and grief win?

I caught up with filmmaker and best bud Laura Marie Wayne in Costa Rica. She shared with me a very candid journey of tragedy, despair, adversity, bravery and tenacity.

“What was it that inspired you to create the documentary?”

“Scott and I had met about 14 years ago and we’ve been friends for a very long time. He’s one of the people I cherish most in my life. When he was attacked I flew down and intuitively brought my camera. I never had intentions of making a documentary because it was such a delicate and fragile moment, however when I arrived at the hospital, Scott had asked me if I brought my camera. Two reasons we decided to start the project was, it could be an avenue for healing, in a really cathartic process. It was also very apparent early on that Scott knew he had been targeted because he was gay and it wasn’t being taken serious by the police. It was so important to Scott that it be taken serious that I made a commitment to tell his version of the story and the events of that night to get his truth. So we did.”

“When did Scott get attacked?”

In 1996, laws were created to recognize assaults on minorities as hate crimes. Attacks on the LGBTQ community had been added to that list. When Scott was attacked, the assailant was charged with attempted murder but it wasn’t recognized as a hate crime. Scott knew without a doubt that he was targeted for being gay. “Was the attack ever recognized as a hate crime, even after protests and the attention the case had gotten?”

“It never did. The sentencing was in 2014 and it’s now too late to reopen the case. It’s our hope that this documentary can help start those conversations with cases going forward.”

“Do you believe that it would have been a longer sentence had it been recognized as a hate crime?”

“I do believe it can carry a harsher sentence.  The reason Scott wanted it recognized as a hate crime was for the acknowledgment of the motive.”

“When the case went to court, did the attacker indicate his motive?”

“He was never asked what his motive was. He had confessed and turned himself in so there was no investigation, it went straight to sentencing. The police never questioned the motive and nobody had searched for it. By the time it had gone to court, there was no possibility to prosecute as a hate crime. They could only go with the admission of guilt to the attempted murder.”

“How is Scott coping with the adjustments in his new life?”

“Scott is an incredibly resilient person who works hard to be the best he can be. In many ways he’s thriving. He’s moved to Toronto and is pursuing a PHD in chorale conducting. In a way he’s blossoming but in many ways, the injury continues to reverberate throughout his life. There are always new obstacles that come up in his life and it’s going to be a life long journey. Some days will be okay and others will be hard.”

“It’s quite obvious you do have a very special relationship with Scott. Do you communicate often with him?”

“During the making of the film I did. I actually slept on his couch a lot. As a filmmaker I felt I had to live the journey with him so I could be really truthful in the storytelling.  We communicate a little less these days.”

“In the film, Scott indicates that he would like to meet his attacker face to face. Did he ever have that opportunity?”

“It hasn’t happened yet but I believe he’s still pursuing it.”

“Considering the courage Scott has already exhibited in coming out as a gay man, is there a correlation in using that tenacity to tackle his adversity in respect to his paralysis?”

“Absolutely, he started a campaign called Don’t Be Afraid that was born out of his experience growing up as a closeted gay man. He lived with fear of being himself, fear of being accepted by his loved ones. After his attack, there was a moment for him where he saw fear all around him and he didn’t want to be afraid anymore. I think it was a pivotal moment in his journey when he made that statement from his hospital bed. It applies to so many things in terms of having tough conversations about sexual orientation to facing new challenges that life has brought.”

The campaign, Don’t Be Afraid has evolved but still lives on through Scott Jones and his efforts in visiting schools to inform and spread the message.

“Were there certain aspects you wanted to focus on when creating the documentary?”

“It’s a bit of a mixer. When we started we really didn’t know what his journey would look like. As we went along, it became apparent what really needed to be in the film. His connection to music and connection to nature became the focus of what was initially threatened most by the attack. He could no longer press the pedal when playing piano, which was his main instrument.  He would practice daily for hours on end. Since his injury though, he’s been able to find choral conducting and choir as a new form of expression, which is quite beautiful to witness first hand. Similarly with nature, he was such an avid outdoors person who would ride his mountain-bike and climb to these hidden destinations in the forest. With a wheelchair, a lot of that becomes off limits if the park hasn’t taken the time to build a path. Initially it was a big loss for him but over time he has found other ways to connect with nature. I found it important to include that fabric of nature. In a way the landscape became this metaphor for his inner landscape.”

“A lot of the work that Scott does with choir is designed to bring people together. He’ll pick a specific repertoire that speaks to a certain issue, using choir for social change.”

“Where will the film be shown?”

“We had the world premiere in London, England, then we showed it at Hot Docs in Toronto. This fall we had a nice little tour with it across Canada. It was in Calgary, Winnipeg, Halifax, St John and now it’s BC premiere in Whistler. We’re also taking it International with screenings in Cuba, which is incredible and has a lot of meaning to me because I went to film school there. In January we’re going to Turkey, which is very exciting and meaningful because there is a countrywide ban on any organized LGBTQ events.  They are years back in terms of conversations that we’re having but we’re going for it and showing the film there. It’s really taken on a life of its own and we hope that it grows and continues to travel.”

Laura and Scott have known each other since she was 19 yrs. of age and his first year of university. She firmly believes that there are so many reasons that life has brought them together. She says it’s so much bigger than this film and it’s so much bigger than the queer community. They’re soul friends and kindred spirits.  Laura acknowledges that making this film has brought them closer together and that it’s been a real blessing.

“What were Scott’s first impressions on seeing the film?”

“He was very moved by it. He cried, he hugged me and said thank you.  He was very involved throughout the entire filmmaking process. He had seen the cuts and has had various input along the way. He very much feels like it’s an accurate reflection.”

“What is the message you’d like the audience to walk away with?”

“I’d say there’s three layers to it. When I was cutting the film, in my mind I felt like I was making it for someone like my dad, who has no experience with the queer community.  In an open and inviting way, I wanted it to be a window into the queer world, so I hope that it happens. Secondly, I really hope it raises awareness about how we can work toward having a barrier free society. It’s something we both had no idea about before making this film. Suddenly every public space, restaurant or café with one step or without an accessible washroom is now exclusively able bodied. It really doesn’t have to be like that by simply adding a ramp. Thirdly, on a deeper level; I hope it really inspires people to be kind, even to each other. Throughout the film Scott often talks about the little boy inside of him and to try and be that gentle with ourselves all the time; to remember that we’re all little humans trying to move through the world.”

“At which stage did you get the National Film Board involved as producer?”

“A close friend of mine had come up from Cuba for one month and we had completed some really intensive filmmaking that included some of the most important scenes. We also managed to raise 11,000.00. Once I had all of the footage I travelled to Montreal for a film event where I then met Annette Clarke, who is the executive producer of the Atlantic/Quebec region. I honestly didn’t go around telling the film to anyone because it was too precious to me and about my friend but when I sat down with Annette and had a ten-minute meeting, I immediately felt this sense of deep integrity and wisdom. I spoke to her about the project and she asked me to put together a 5 minute demo; I did that and a month later we were working together. She’s been a huge support and I’m very lucky to have worked with her because she really trusted me. She really changed my life and helped get the funding for the film and move it to places it never would’ve gone.  She’s a real champion in this story.” The experience you get in the theatre watching this film doesn’t compare to a small screen. It’s much more intimate, especially with the surround sound echoing the beautiful music of Sigor Rós. If you happen to be up in Whistler from Nov. 28-Dec. 02 please take the opportunity and watch it. It could very well change your life.