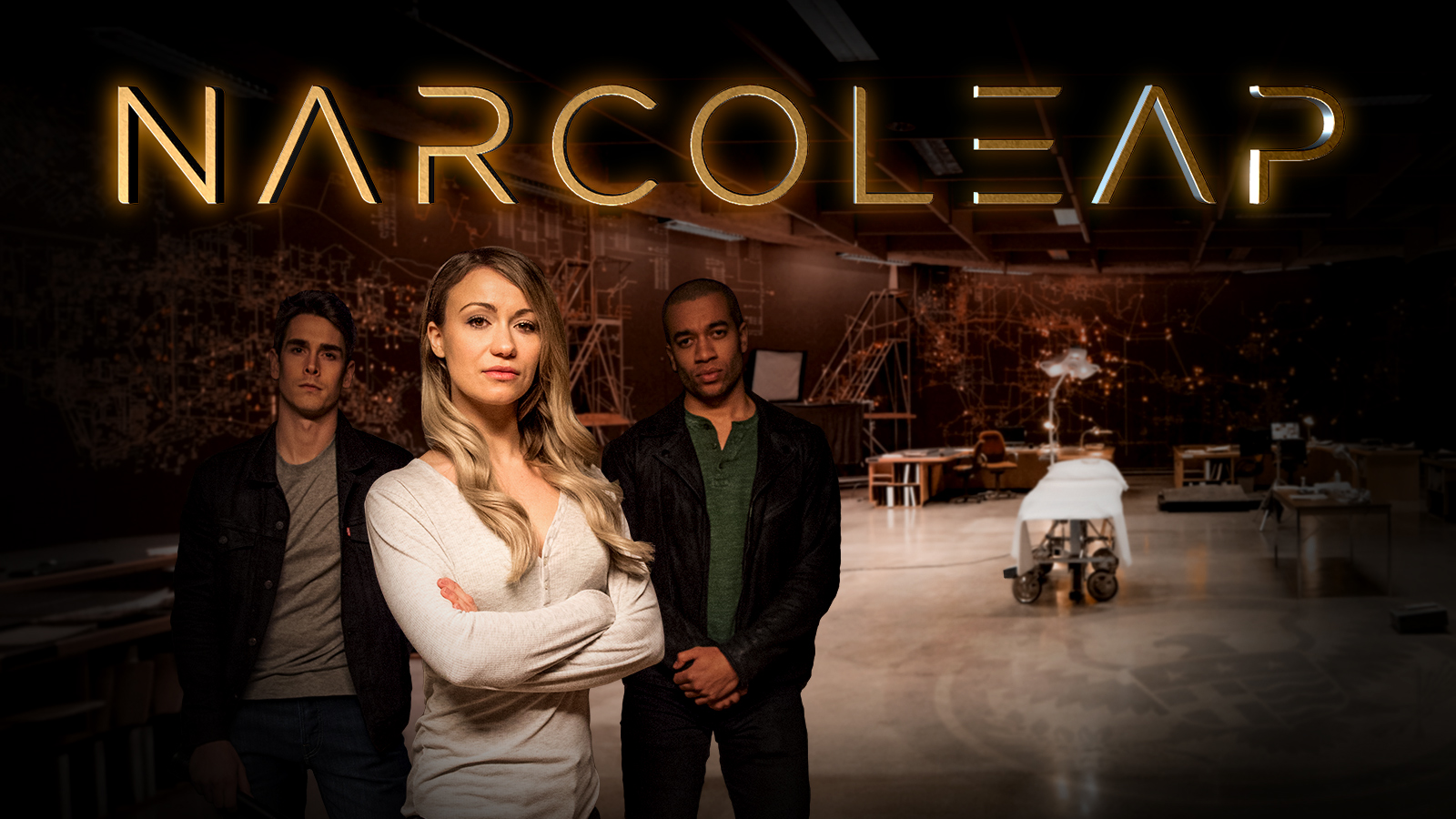 For decades men owned the directors chair. That is changing as we strive to recognize talent and not gender. More and more female directors are stepping up to the plate and getting noticed, not for their gender but for their films and their amazing directing. Kate Green is a new director making her mark with her first directorial debut with NarcoLeap. I had the incredible opportunity to chat with this talented new director and this is what I learned.

“I’ve seen the trailer but was hoping you could tell me the concept of NarcoLeap.”

“NarcoLeap is about a young woman named Kelsey who finds herself thrust into a world of espionage when she discovers that during her narcoleptic nap she’s actually commandeering the bodies of real people across the globe.  This ability to leap/astral-project into other people. It’s something that the military has been trying to harness because it would make a great assassin, being able to leap into a body half way round the world and assassinate someone, then leap back undetected. It would be quite a powerful weapon for the military but for Kelsey it’s been a waking nightmare.”

“Was the original concept yours?”

“At the time, I was working with a young writer, Donald Auger and I was looking for my first directorial project in the scripted world. I absolutely love Sci-fi and we’ve been collaborating on a few different things and creatively going back and forth. I said to him, that I’d love to do a Sci-fi, I’d love to have a strong female lead and I’d love to work with Chelsey Reist. Within a week he came back and pitched me an idea. It didn’t have a title at the time but I knew there was something there that was interesting so we started developing the idea. About a month into it, Stranger Things came out and there were too many similarities. It was nice to know though, that we were in tat zeitgeist. We thought, okay lets start fresh and go back to the drawing board.  I optioned that original concept from him but at that time, I had been accepted into the Women in the Directors Chair program. With his blessing I took the project on and developed it into what it is today. After that I had found some opportunities for funding and thought I might be able to put this together, so I put my producer hat back on and got the funding. At that time I brought on David Shmidt, who wrote the script. I handed off the development package to him and he hammered out the scripts.”

“How many episodes have been completed?”

“When did you start filming the episodes?”

“We filmed for 12 days in February and on the last day it started snowing but we worked with it. It came out online in mid July. We released all episodes at the same time because a lot of people like to binge watch. People really wanted more and were leaving comments online asking for more and more and when is season 2 is coming out? There’s quite a cliffhanger at the end of season 1. There are a lot of unanswered questions that we pose.”

“Where do you see the series going moving forward?”

“We will like to do a season 2 which would be fantastic and answer some of the cliffhangers that we left at the end. It would be a real privilege to be able to explore that. In my mind its always been a prequel to a television series, so at the same time I’m developing it for Television.”

“Does it matter whether it’s a Canadian or US network?”

“It doesn’t really matter which network, it’s really more about making sure it’s on brand. With that being said I never thought I’d see NarcoLeap on CBC. I never thought it was in the same brand but online CBC is taking some chances and doing some really interesting stuff.  As a television series, I think there are a lot of networks I think it could live. Whoever wants to buy it is fine with me.”

“How did you fund the project?”

“The Independent Production Fund was the first to the table. I then got the Storyhive 100K edition and then Creative BC had a development pop up fund as well. Combined with tax credits, we were able to squeak by the first season. It’s been really great. It’s a lot great BC actors and the crew was just fantastic. More than that, they’ve all supported this project and I don’t know if its because its a born and bred in BC project or if its because it’s such a high concept show and there’s nothing out there like that right now. Everyone has seen the potential and has supported it from the ground up.  I feel incredibly grateful for all their support.”

“What can we expect from season 2?”

“In season 2 there’s a lot of backstory we’ll be looking at from unanswered questions, as to, how did this military operation begin? Our character Miles who has a bit of a  love interest with Kelsey Atkins; we’re going to explore that more. Her best friend Aidan is involved in a bit of a love triangle that we’ll be exploring a bit more and also understand how Miles got involved with this operation. I don’t know if it’s a spoiler or not but Cameron Bancroft plays Kelsey’s dad. He shows up at the end as the director of this project. We’re going to be explaining a little bit about him and what happened between his and Kelsey’s relationship.” “How does it feel in the Directors chair?”

“There is a picture of me taken on the very last day of the very last scene. I had just said ‘cut’ and our photographer had taken this picture. It pretty much encapsulates exactly how I felt. I was so scared going into it and second guessed everything I was doing but in that moment and in that photo its like, I did it, I was so happy and so satisfied that I knew I could walk away knowing I did the best job I could. I know I was supported by incredible people but it was one of those moments, where I said, ‘yep okay, good work Kate, you did it.’ I know for myself I’m my own worst critic. I am harder on myself than anybody. To allow yourself to have those moments of celebration and I think, especially as a woman to say ‘yeah I did this and I think I did a good job and I can celebrate this.’ I don’t allow myself those moments very often.”

“Considering you’re a female director and there’s not a lot out there, do you feel any added pressure?”

“It’s a funny thing. I know that I do but the fact that I’m a woman has never really crossed my mind in the sense of thinking, oh I can’t do something. I played the drums in a band and in high school I was in the percussion section. I’m the daughter of a carpenter and spent my summers on construction sites. Being a woman has never made me think I can’t do something because of it, but I do know the lens is on me as an up and coming emerging female director. I just kind of keep my eyes on my game. I guess that’s the best way to answer that is, I knew I had a job ahead of me and I was just going do the best job I could do. I was going to come prepared as possible. One of the best compliments I’d gotten was from our gaffer. He’s a young guy that’s worked on Netflix shows and all the big US shows that come in. He says to me, I’m one of the best directors he’s ever worked with. I had to stop myself from laughing, thinking; if you only knew I’d never done this before. He never had to stand around and always knew what I needed and I knew what I wanted. For a guy like that, it was a real compliment but I also think that comes from preparation.”

“In your past projects you’ve worked with other male directors. Did you feel that everyone treated you the same as a male director?”

“Yes, I did on my set. I don’t know if it would be different if I was on a large network TV show but on my set it felt totally fine. Ryan McMaster was my DOP and he was just amazing. He knew where I was at in terms of experience but he was willing to collaborate and talk things through with me. It was an amazing working relationship.”

“How difficult was it to put a crew together?”

“Emily Keller was one of our producers and something we’d talked about was building the NarcoLeap family. We knew that because we were a micro budget project people would have to be there for the love of the project, the concept and the experience. They were; they were there everyday giving it 100% and they were happy to do it. To me it was one of those onset experiences that remind you why you got into film. It was a trickle effect. Chelsey Reist and Nicole Oliver came on board first and because of that we were able to get some attention. Ryan then came on board and all of a sudden we were a magnet for incredibly talented people. They loved the project and I was very lucky. I don’t take that for granted at all.”

“Is the financing the same going into season 2?”

“It’s a work in progress and still early days. The show has only been released 8 weeks ago and right now I’m just enjoying the online interaction with fans and hearing what people think about it. As we hunker down to the fall I will start filling out those applications and try to rustle up money for season 2.” “What’s the best part of this project?”

“There are a lot of best parts about it. I had complete creative control over the project and it’s just amazing to be able to have that. As it gets bigger and as the budget increases that might change but for right now it was an amazing experience to have that. One of the best moments for me was when we did a prelaunch screening for the cast and crew at the Rio theatre and there were almost 200 people there that night, on a Monday night. That moment when you hear people laugh at the jokes or gasp at a cliffhanger, it’s a moment of celebration and sharing it that was by far the highlight.”

Kate Green is the kind of director that comes prepared with an all in attitude. It was a thrill to be able to talk to a female director for a change to hear her perspective on her new experience in building a successful brand/series. If you are a fan of sci-fi then this series is up your alley. I’ve seen a couple episodes since this interview and had my socks blown off. I’ve only found one but I’m sure the other one is close by. Watch the series and satisfy your appetite. You can thank me later.