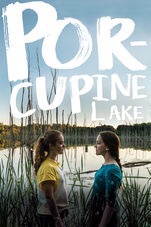 When you search back through your memories to a time when you began to transform your identity and find answers you never knew you were looking for, do you arrive at 12-14 yrs. old?  This is the age you begin to realize the world is not so 2 Dimensional. It can be a cruel time and it can be an absolving time for later reflection. You’re stepping up your game in those years and pushing the envelope. You will discover your inner secrets that only a best friend can help foster.  Your first kiss, your first crush, your first soiree into understanding the bigger picture.

Porcupine Lake is a coming of age film that reminds us of a time when we felt very confused about our bodies and our hormones. The world and people around us were becoming less transparent and more impactful. This film brings you on a ride where the destination is the starting line.  It’s a vital time in your life, when your principals, character and opinions begin to form.  This film is extraordinary with it’s ability to reach so many audiences around the world while delivering the same message despite it’s cultural differences.

I had the amazing opportunity to speak with Ingrid Veninger about the making of Porcupine Lake. She is the writer, director and producer of the film.

“Where did the inspiration for this film come from?”

“I feel there isn’t enough films representing young girls transitioning into teenagers and was inspired to contribute some of my own childhood experiences growing up in small town Ontario. From finding your first best friend to getting your first kiss and the first time you rebelled against your parents.  It’s a time when you begin to find your identity and the confusion, the hormones kicking in for the first time and desire.

All of that stuff that seems so vital to the conversation about being a girl and a woman in the world. I just wasn’t seeing that on the screen and wanted to try and tell the story.”

It’s an interesting film because we are familiar with young boys going through the hormones and discovery while searching for the next opportunity to learn but you don’t see films portraying young girls going through the same thing. It’s a great picture window into their young lives with the suspense of experiencing first time right and wrong choices that mirror some of our own.

“I was also interested in how we grow, how we learn and how we imitate the people around us.  These girls and their secret world and their friendship are set against Kate’s siblings. Although we only see glimpses of their life, it’s clear that they are going through their own troubles. Compounded onto that, there are the parents starting to show the cracks in their marriage. You begin to see their flaws and imperfections. You tend to idolize your parents because they’re suppose to love you and protect you but then learn that they’re in debt or they’re drinking too much and their fighting.

How do you deal with that at the same time you’re starting to feel these other things for the first time? Growing up in relation to the siblings and the parents and how all of that can impact and make such a deep imprint.  There are great examples of young girls discovering who they are and what they’re choosing to connect with and imitate as a way of shaping their personality/identity. We pick things up and kind of own them. Then we test them out on people. Does this work, does it make me look cool? It’s all in experimentation.”

“Where did you shoot the film and how long did you take over the restaurant/truck stop?”

“ We shot in the small town of Port Severn, Ontario. We were allowed to take over the restaurant every afternoon. We also used our rented cabins as a second location for filming Kate’s home. We used the incredible scenery surrounding the town.  We were incredibly impressed with the Royal Victory Hospital in Barry, Ontario for their amazing generosity in allowing us to film some scenes there. We also shot a movie scene inside a theatre in Parry Sound, Ontario.  I shot my first film in Port Severn and always wanted to do another because of the incredible backdrop. The crickets, the cicadas, the lakes, the character and the forest is the perfect place to get lost. We filmed throughout August and September for a total of 23 days with a crew of five.”

Ingrid is quite familiar with the town considering her father managed a truck-stop very close to where they were shooting. Although they lived in Toronto, she used to spend a lot of her summers there between the ages of 8-14 while her mom would hold down a job in Toronto until she and her dad returned.

“This film seems to be able to resonate with many different audiences. Were you targeting a certain audience when you wrote it?”

“I had three goals in mind when making this film. I wanted it to stand up to Art House films, such as Lady Bird while also appealing to families with children. I also had expectations of the LGBTQ audience embracing it. It’s very hard to do, but the film was successful in the three goals.  You may think you know your audience but it doesn’t always work out that way.  Sometimes it turns out to be a different audience that will gravitate toward the work.”

“The cast in the film is stellar. I was so impressed with the two young girls carrying the story, considering their age. Was it difficult to find them?”

“It took me 18 months to find them and over 100 auditions. The two teen girls playing Bea and Kate were not easy to find. Charlotte Salisbury plays the more quiet and innocent girl Bea and is thirteen. Charlotte had never acted before but could take direction very well. She had a natural charisma with the camera. She’s from Windsor, Ontario. The other young actress, that plays the more feisty Kate, is from Melbourne Australia.  She is 13 year old Lucinda Armstrong Hall that carries a thick Aussie accent when she isn’t in front of the camera. She is a true tour de force and has received a Canadian Screen Award nomination for her work in the film. She’s done other work in Australia but this is her first time in Canada working in her first feature.  Some actors like to go off script but the two young girls stayed absolutely true to it. There was no improv and they made every word written in the script feel very natural.”

Ingrid says the hardest part about the location was renting cabins in peak season. The restaurant truck-stop was so busy, it was difficult to keep the doors closed. A large part of the budget went toward lodgings but she really wanted a summer love story as opposed to a fall, winter or spring one.

“You’ve provided a flash back for many women as well as giving male teens and men a glimpse into the world of young girls. It was very interesting to see the sharp contrast.”

“I admit to loving the coming of age films because the actors are young and by being around a creative process, it can feel very empowering to them, it can boost your confidence and self-esteem. It can truly inspire them if you make it a positive experience. Creating a film that can charge young people up and give them a fire for their life that inspires them, is what I want to provide. I was acting at age 11.  It’s not only a huge challenge and thrill but also a huge responsibility for a filmmaker because you’re working with people that are just shaping themselves, so you want to make sure the experience is going to be amazing for them. I like that challenge.”

“Where did you find the financing for the film and how big of a crew did you require?”

“I received funding from Telefilm Canada. They were the first ones in. The Herald Greenburg fund helped with production costs and my distributor, Ron Mann – The Films We Like, stepped in to provide more financing.  We also had tax credits. I used a small crew of five and discovered a way to make feature films efficiently, economically and how to put money into the time.  I’m doing 15 jobs as writer, director, AD, producer, location manager and much more.  Everybody on the crew is also doing multiple jobs. I think big sets are great, where everyone specializes in a specific department, however, in my films I’m doing 15 jobs and everyone else is too. It’s the only way you can make a feature with a crew of five.  I’d rather pay a small crew of talented people well that can perform multiple tasks.”

Porcupine Lake has had an amazing run with 25 festivals since TIFF. It was recently in Whitehorse and Spain with more screenings in Amsterdam, Sweden and Australia with Lucinda Armstrong Hall in attendance. It will also be screening in Santiago Chile, Lincolnton N. Carolina. That is just the next 3 weeks.  Ingrid Veninger would love to travel more with the film but she’s currently doing her masters in Cinema at York University. She only has Fri- Monday to travel. In November she boarded a plane bound for South Korea for a two day trip. 18 hrs. flying each way for two incredible nights.

“When you see how the film translates in Buson, S. Korea. When it does, it is so rewarding.”

The film will be opening in theatres in Vancouver and Toronto. It will also be available on iTunes and the Superchannel coming March 1st. It is also in town screening at Vancity theatre with the Women in Film and Television Festival.

This is Ingrid’s 6th feature film that she wrote, directed and produced. It’s also her second coming of age film and it took her 2 years to write it. She says she’ll be switching gears with her next film, promising to be much different by utilizing 8 countries for locations.

If anyone reading this article is interested in making a feature film on a low budget DIY, there is a documentary that was produced encompassing the making of this film, entitled The Other Side of Porcupine Lake. It takes you through the writing, the casting, finding the locations, the production, the editing, working with the composer and every other step in post production that leads up to watching the first print/the first DCP of the film. You can find the link at www.punkfilms.ca

If you want to see films made by women and immerse yourself into a time of innocence and discovery, then go to the festival and watch this film. It will help you understand the complexities of young girls while making you appreciate the many layers we all had at that young age.