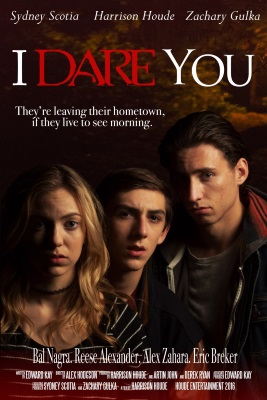 When I was a teenager, I was dared to do a lot of things that went against my better judgment. From allowing a large hairy spider onto your arm or eating a teaspoon of dry mustard, when you’re a teenager you try to accept every challenge in fear of being labeled a chicken or scaredy-cat. This short film confronts one such dare that quickly turns into a nightmare.

Having been invited to the premiere, I grabbed my bag of popcorn and waited to be entertained. Observing the crowd that came to support the film was encouraging.

The lights dimmed and the opening scene appeared. Three teenagers in a small town bored out of their tree. Add a few beers and bring on the dark of night, you’ve got some serious dares drumming up. Eventually a dare leads to breaking into an abandoned cabin. As it turns out the cabin isn’t exactly unoccupied and by the end of night the teens barely escape with their lives.

Once it was over, I felt like I had watched a mini thriller with all the elements of a feature. The inciting incident, story arc, conflict and “the all is lost” moment were all there. A great cast with an amazing first time director at the helm, Alex Hodgson.

The gunpowder behind getting the film made was thanks to Harrison Houde. He found the script and developed it with the cooperation from friends, co-workers and Kickstarter.