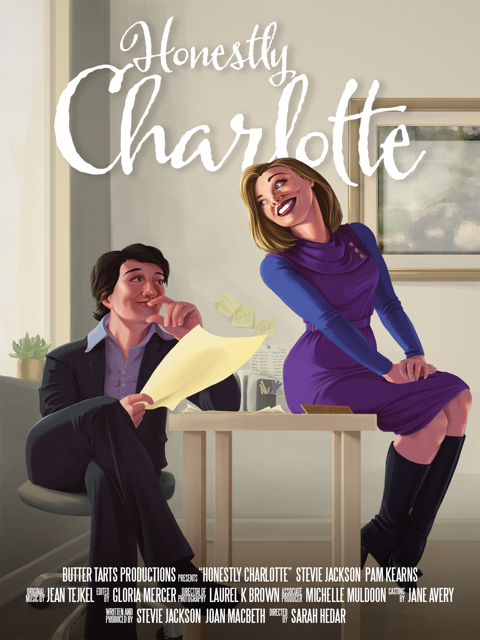 ‘A routine job interview goes sideways when the applicant gets completely honest about what its like to be an artist trapped in a corporate cubicle.’

This is the premise of the short comedy, Honestly Charlotte.

It was co-written by Stevie Jackson and Joan Macbeth. I had requested an interview with both these women to hear about the story behind the story. Unfortunately Joan was out of town but I was lucky enough to meet up at a coffee shop with Stevie. Stevie Jackson is a professional actress known for her work in Supernatural, Grandma, Wight Space (web series) as well as a long list of theatre productions.

“How did the story of Honestly Charlotte begin?”

“Kind of a funny story. I wrote it over a year ago to cheer up a friend. It then sat in a drawer for a year until one evening when I had attended a gathering. It was one of many we held bi-weekly at a lounge organized for the purpose of women discussing the film industry. The discussion had turned to the lack of positions for females in the industry. It may have been the wine, but I felt brave enough to announce the script I’d written. Joan Macbeth took an interest and had asked me to send it to her. She liked it and we agreed to workshop it together.”

Joan is a screenwriter that brought structure and a few other improvements to the script. Having co-written it, they also agreed to co-produce it. Stevie tells me that campaigning for funding wasn’t an option because neither of them had produced a film prior to Honestly Charlotte. Joan had made a documentary prior, but it wouldn’t have impacted their funding chances. If they were going to make the film they’d have to fund it ‘out of pocket’.

Something very unique about this film that separates it from the rest, the cast and crew are all women. It was intentional to address the inequalities that qualified women face in the film industry. They wanted to prove the point that it was possible to make a film with an all women crew. “We posted on social media sites for the positions. We didn’t have the budget to pay them, but fortunately everyone was willing to volunteer a day of their time. We intend on paying our crew on the next production.

Some of the women that made this film possible had recently finished film school and others had worked on sets. We also acquired a casting director, Jane Avery. She was essential in finding our other actress, Pam Kearns through Actors Access and The Actors Guide. We were even fortunate enough to have a composer, Jean Tejkel volunteer to do our musical score. It turned out amazing.

Areas we knew we’d have to spend on were insurance, equipment and location. We also provided tasty food.”

Once the ten women crew was formed, they held one day of rehearsal, rented out office space for a day and went into production. Sarah Hedar directed it and their DOP was Laurel K. Brown. They were considerate enough to hire two sound boom operators to take shifts. Holding up a boom all day can be exhausting. They finished shooting in March and had picture lock in September, thanks to their editor Gloria Mercer.

The day of the shoot, Stevie credits Joan for making her performance so much easier.

“I was able to concentrate on acting while she took on the duties of script supervisor, continuity and AD.”

They have recently completed post on the short comedy and have begun the process of submitting it to festivals. Once it’s tour of festivals is complete, they hope to have a distributor on board. If that doesn’t happen, it will become the first episode of a web series.

I’m always curious how a seed for a film gets planted. Thus far, I’ve not heard the same story twice. Being genuine and original speaks volumes.

If you’d like to see the entire cast and crew involved in this comedy, please go to the following websites.

www.honestlycharlotte.com/ and www.imdb.com/title/tt5325672/?ref_=nm_knf_i3
I look forward to being in the audience once a venue is announced.

One thought on “Exclusive: Honestly Charlotte”