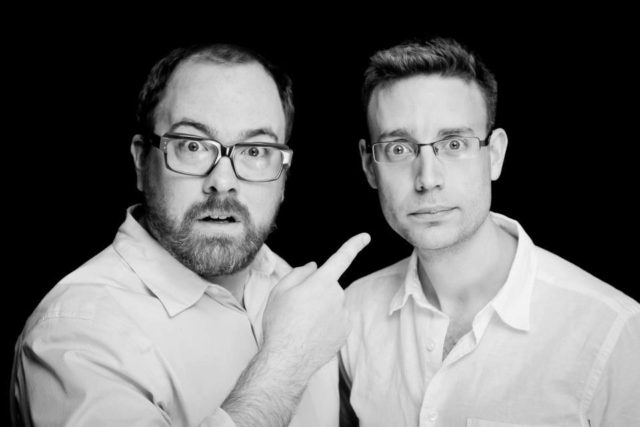 Cal Brunker is a director and writer. Bob Barlen is a producer and writer. Together they co-write and create animation for ToonBox Entertainment, located in Toronto. Their latest production, The Nut Job 2, is set to be released on May 19 of 2017.

They took some time out of their very tight schedule to tell me about the animation world. One that I’d never explored and one that I’d like to explore again.

In getting to know Cal and Bob, it became evident by their friendship that their relationship went beyond work. In fact, they were best friends in high school and Bob was the best man at Cal’s wedding.

After high school Cal went into animation school. Bob got into film school, followed by the Canadian Film Centre. Cal finished animation realizing he’d rather be a director. Having taken different avenues in schooling, one day they’d find them running parallel.

Years later they teamed up on the animated film, Escape From Planet Earth. Since then they’ve become the triple threat.

“What is the biggest advantage to working in animation?”

“The greatest thing about animation is there is no limitation.

Whatever your imagination can dream up, you can create. The only limitations are budget.
You don’t need special effects or stunt people.”

Cal tells me that although there is not a large camera crew needed, there is still a virtual one. In order to mimic the feel of film, a department is responsible for creating scenes that feel like panning or dolly shots. There’s even a lighting department to help the animation feel naturally lit.

“Although we are working with virtual characters, the actors behind the voices are very real. Getting the best performance by motivating the actor or trying the dialogue another way is quite the same as live action.”

Another interesting difference is the numbers of artists working on the production. Approximately 150 artists creating 4 seconds of animation per week per artist. Once per week they splice the pieces together to preview their work, inside the studio theatre.

“The sense of pride in that room is always consuming. Anyone working in animation didn’t get there by accident. There is a tremendous amount of work and dedication that gets you there.”

Having been creating professionally for the last ten years, they tell me it’s been a lifelong journey. Technology has advanced so much since they began that it’s allowed the lines of reality and animation to become blurred.

Their film, The Nut Job 2, is being distributed in the U.S. by Open Road Films and sales are being handled internationally by The Weinstein Company.

“An advantage to working in a smaller studio is we can produce an animation in approximately 2 ½ years as compared to a Disney blockbuster in four years. It also allows for so much more creative flexibility.”

I’ve always wondered why some people go into animation. These men supplied me with all the right reasons. I look forward to seeing their finished film, knowing the extent of long hours, the virtual concepts, the planning and crew necessary to create every minute. I will never look at another animation the same.

One thought on “Exclusive – Bob And Cal Get Animated At Work”