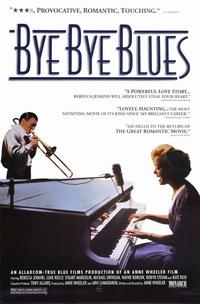 Many films have stood the test of time. Mostly because they are made so well that you have that moment you watched it engrained in your mind amongst other memories you value dearly. The film will resonate with you through the music and the storyline. It is capable of tossing your emotions and sometimes stretching them to the limits. Ever cry in a theatre? Sometimes the story is so close to your own experience you feel the film was somehow made to represent an event that you lived through.  Films will always continue to move us when done right. The ones that stick with us are exceptional and part of an elite library that can be revisited at any time with the same appreciation.

One such film that can touch you on many levels is Bye Bye Blues. Based on a true story about a husband that goes away to fight in the Second World War and then goes missing. The mother struggles to provide for her children and begins playing in a band. The band travels from town to town and city to city before evolving into a much bigger and more popular band that eventually get on the radio. The film was written, directed and produced by Anne Wheeler in 1989. It’s a beautifully shot, wide screen movie with huge landscapes. It’s renowned for its images and its quintessential Western Canadian prairie shots. It was recently digitized and rereleased into theatres and is part of the first ever Directors Guild of Canada B.C. District Council Directors Showcase Weekend from Sept. 7 – 9th.

I had the great pleasure of speaking with one of Canada’s most prolific female directors recently. Anne Wheeler is a very renowned filmmaker responsible for paving the way for not just other female filmmakers but for other talented creative visionaries that use film as a platform to say something.  Known for making Canadian classics that won numerous national and international awards. Her work has garnered seven honorary doctorates and an Order of Canada. She live in White Rock B.C. with her husband and continues to write/direct while mentoring filmmakers in the art of story-telling.

“What was the inspiration behind the film?”

“It was inspired by my mothers story. My father went missing in the Second World War and my mother found a way to provide for her family by playing for a dance band that became very successful. It’s the story of her years at home during the war and how it changed her and other women. When the war ended, her life had to do another dramatic switch when my father came home.”

“Back then in 1989, in those days there was a lot of optimism and in general a lot of support to tell a Canadian story that was a bit of a renaissance. I was telling a story that was very specific to Canada and the Super Channel had just built a big beautiful studio in Edmonton that we used. Doctor Tony Allard invested a lot of money into the film. We put that together with the usual Telefilm, CBC, National Film Board. They all cooperated at that time together where they don’t do that too often now.  We then secured distribution deals in the US and England. It wasn’t a huge budget but we shot in Canada and India in 3 different seasons so it was a big challenge and it was received extremely well.”

“Is the film still circulating?”

“It’s been re-launched by Mongrel Films and is having a second life. It’s available on iTunes. It was originally shot on 35 mm and I recently had a digital screener made.  It’ll be shown in the theatres as a big beautiful digital print.” “Have your parents ever had a chance to see the film?

“My mother has seen it but my dad passed away a long time ago before he had the chance.”

“It’s a classic and continues to be sought after and is somewhat of a collectors item now. It’s not easy to find a DVD and is considered an iconic Canadian film and it gets screened several times a year throughout Canada and still draws an audience. It’s seen as one of the ultimate Western Canadian films. It was distributed widely in the US when it was released. It stayed on the screens for months and months because it’s a small town Western story that’s very romantic and very emotional with a fantastic music track. Warner Bros. put out a CD of the track when we first released the film.”

“That sounds amazing. Is it big band music?”

“It starts with a small 5 piece band but as she played during the war it got bigger and bigger. There was a horn section and got to be a big band because of all the young men coming from Australia and all over the Commonwealth to be trained to be flyers on the Prairies. There was a lot of people from other countries on the Canadian Prairies during the Second World War training to be pilots. The dances became bigger and bigger and clubs opened. It became quite the social scene. In the film they end up driving all over the Prairies and into the cities to play at some of the bigger clubs and eventually getting on the radio.”

“Have you found that the film resonates with war vets?”

“Yes I have. Hardly a week goes by that I don’t get a letter about this film. It moves people, it shows a woman with a couple of kids with not much of a way to support them and not knowing if he’s alive but carrying on. The spirit of the music was very uplifting as it was and the whole impact that the war has on extended families, the children, the parents. Although the music is very energetic it also has a serious theme as well. People really embrace it and they’ll write me and want posters and copies and just to talk about it because it reminds them of their own parents. Most of the veterans from the Second World War are no longer with us. Many many people that have contacted me have done so to get a hold of the film for their parents.”

“There doesn’t seem to be many stories like this being told on film that depict a mother raising their children alone.”

“No there wasn’t and it was the first of its kind and at that time it was unusual to have a female as the lead. It was really groundbreaking for a feature film and to tell a woman’s story was very unusual. It shows how the women did take over and do the work and keep the towns going, the farms going and the businesses going. Once the war ended and the men returned, everyone had been changed from their experiences. Relationships changed because they were no longer the same two people from their marriage, due to these enormous experiences.”

“Did you write the script?”

“I wrote it, directed it and am one of the two producers.” “It was a big big effort and a life changing film for me and I’m glad their showing it to the public again because there’s always a demand for it.  I’m glad that it has a chance to have a Vancouver audience.”

This film is coming back to town and is part of a group of Canadian films that were very successful when they first premiered. Don’t miss your chance to appreciate a great classic with a captivating storyline. It will move you emotionally as you embark on a personal journey rooted in Western Canadian culture.