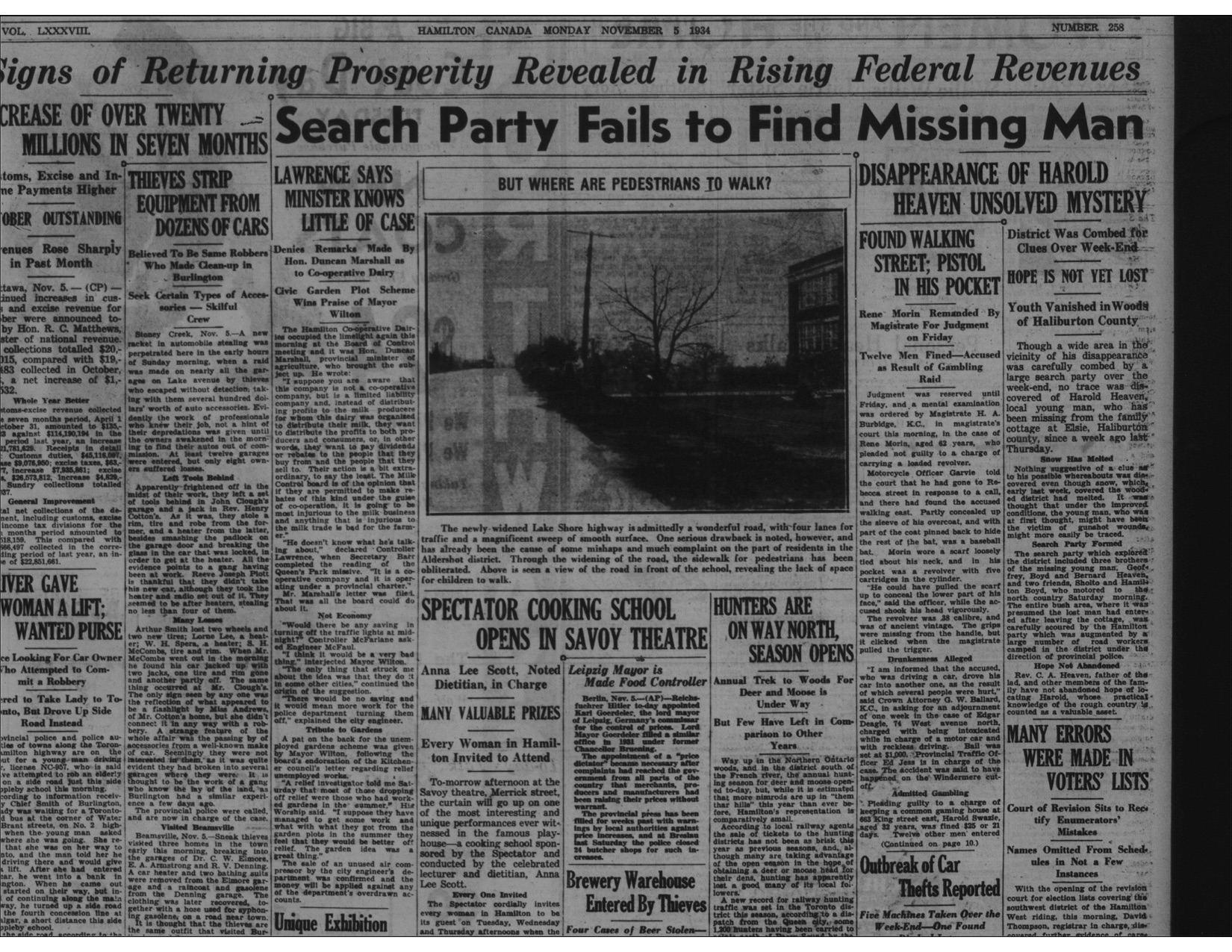 Every day we find ourselves dealing with mysteries. Sometimes they get solved instantly, sometimes they don’t get solved at all. Sometimes, they last a really long time. Much like the story of Harold Heaven, one of the oldest cold cases in Canada. It was said he committed suicide long ago according to some family members, but thanks to a multitude of other stories and secrets, two men think it’s something else. Mike Mildon and Jackson Rowe teamed up to bring an Investigative series like no other – one that combines comedy and humour with the investigation. To make it more interesting, these two have never actually investigated a mystery before. So it was a breath of something else for them, that made for a fantastic and interesting new series. I spoke to the two fellows so I could figure out some more on the new series For Heaven’s Sake, which unveiled a lot of new clues in the series and about how they made it.

HNMAG: So, I’ve been wondering, how did you decide to have the story told in a series like this?

Mike: That’s a good question. It’s a disappearance, we don’t exactly know what happened, and we got a hold of the 1934 police reports, Jackson and I. Then when we started going through them, there was a lot of investigative holes and things that the police should’ve done, but didn’t do. It was checking a lot of our true crime boxes, because we consume a lot of that content. We started to play around with the idea of ‘What would a series like this look like?’ ‘Would it just be one theory, or do we do all the theories at once?’ so we started to play with structure and it started to grow from there.

HNMAG: What is it like to balance out a serious subject with comedy? How do you keep it silly and serious at the same time?

Jackson: That’s just our nature. It felt like if we were the ones making this documentary, we just inject a little humour. Thet’s how Mike and I operate. We made it a priority to be ourselves, but also be as respectful to the case as possible.

HNMAG: So you’ve made other productions in a similar matter?

Jackson: Yeah, we come from a sketch comedy background, we started a Youtube comedy channel. We’ve made over 40 videos, mostly comedy.

HNMAG: You did the jobs of starring and producing as well. How did you balance all the work out?

Mike: It wasn’t easy. There was a lot of moving parts with documentary. You have to be in one place in the morning, then another in the afternoon. It was a lot of prep-work. As far as questions we were going to ask people, we can look into events to set up for people and get the town talking. We come from an improvising background, so even on the days when strange or new information would come to light, one really has to go with the flow and adjust.

HNMAG: What kind of surprises can the audience expect when watching this?

Mike: We don’t want to give away TOO much, but I think one of the BIGGER surprises that we’re proud of is that we came into this small town and it’s such an old case. Nobody thought we were going to discover anything, they said “You’ve lost everything to time” and I think we actually surprised the town of how much we did figure out. The audience can look forward to that.

HNMAG: Was there anything that shocked you when you saw it?

Jackson: There’s a LOT of moments, you’ll see in the series, where our breath gets taken away. It just happens when a case this deep has so many moving pieces. We’re just so amateur at investigating so a lot of the stuff that shocked us wouldn’t have shocked a professional. What’s fun is we react more like the audience would react.

HNMAG: How much time did it take to do all the research on the investigation and everything else?

Mike: Even before we started filming from getting a hold of the police reports, it was a year of development and figuring out if this series had legs and how deep this mystery goes. We REALLY had to dive deep into every subject and every little artifact we could get our hands on. It was 3 and a half years of research, it never really stopped even when we were filming.

HNMAG: Were there any kind of details you decided to leave out of the series? Did you try to make it simpler or keep every last little detail in the whole thing?

Mike: It’s one of the things with the true crime genre, that we learned a lot in 18-1. It’s really hard to include everything without making the audience feel like it’s an information overload. We really had to pick what is digestible for certain episodes, what helps the audience understand the situation. Even as we get deeper in the series, we kind of get caught up in the idea of ‘You’re taking this fact, you’re leaving this out’ so it’s a very very interesting piece of our documentary that we actually explore.

HNMAG: So you’ve learned a lot about crime investigation?

Jackson: Oh yeah, absolutely. As coming in as total amateurs at investigating to the end of episode 8. We’ve come a VERY long way.

HNMAG: How else do you feel this is different from your other productions?

Mike: I think it’s just more honourable because it has my entire family on-screen. All the documentary subjects are from the town that I cottage in, or it’s my actual extended family. There’s a lot of bending of genres, but as much genre bending as there is, we really committed a lot to the sincerity of the subject.

HNMAG: How did the family feel about being on screen and talking about the case?

Mike: There was so much trust involved. That was something that made me lose sleep at night because I wasn’t sure how I could handle this trust correctly. But this story about Harold Heaven has been more of a campfire story around the bonfire, so depending on the generation of the person we spoke to, some were closer than others. We didn’t have to push any time, or ask any hard hitting questions, it was more of exploring all these theories, having a conversation for 2-3 hours. We tried to make it as fun as possible and as painless as possible. The big news now is they love the documentary.

HNMAG: Now how did you decide who to talk to in the small town and elsewhere?

Mike: Yeah, that was a huge part of it.

Jackson: We really wanted to explore all options. Cold-case investigating is 99% talking to people and having anyone come forward who hasn’t come forward together. We spread the word, took in all the information we can, and then when we have it all, we can decide what we think is true and go after that stuff.

HNMAG: Was it especially a big challenge shooting in such a rural place?

Jackson: It had its challenges and it had its advantages, I would say. We were there mostly in the dead of winter, which is tough with snow. The whole crew had to be on their game, ready to shoot at any moment. But it was also a very welcoming community so when we needed something from them, they were more than happy to help us and it had its ups and downs.

HNMAG: It’s doing pretty well being both on CBC Gem and Paramount Plus, how does it feel to have it going so far?

Mike: I think that is what’s surprising us the most. The instant feedback you get with social media, and how everybody’s talking about it. When we were making it, we thought it would be interesting if the whole world had their own theory of what happened to Harold. Now we’re seeing that within the response we’re getting. People are saying “I believe that. You should look more into this one.” It’s very very cool.

HNMAG: Are you going to investigate any fan theories?

Jackson: I think we’re open to everything, we’ll take it as it comes and we’re not going to jump on every new lead that shows up but something we’re absolutely keeping an eye on.

Mike: Absolutely. Since it’s a family story that’s been passed down for many generations we’ve been able to have more fun with it than most true crimes. We have to find a very specific story and that kind of has the same access and fun that we had here.

For Heaven’s Sake is currently streaming on CBC Gem, Paramount +, and even CBS. Who knows where it could be showing on next? It’s a mystery…