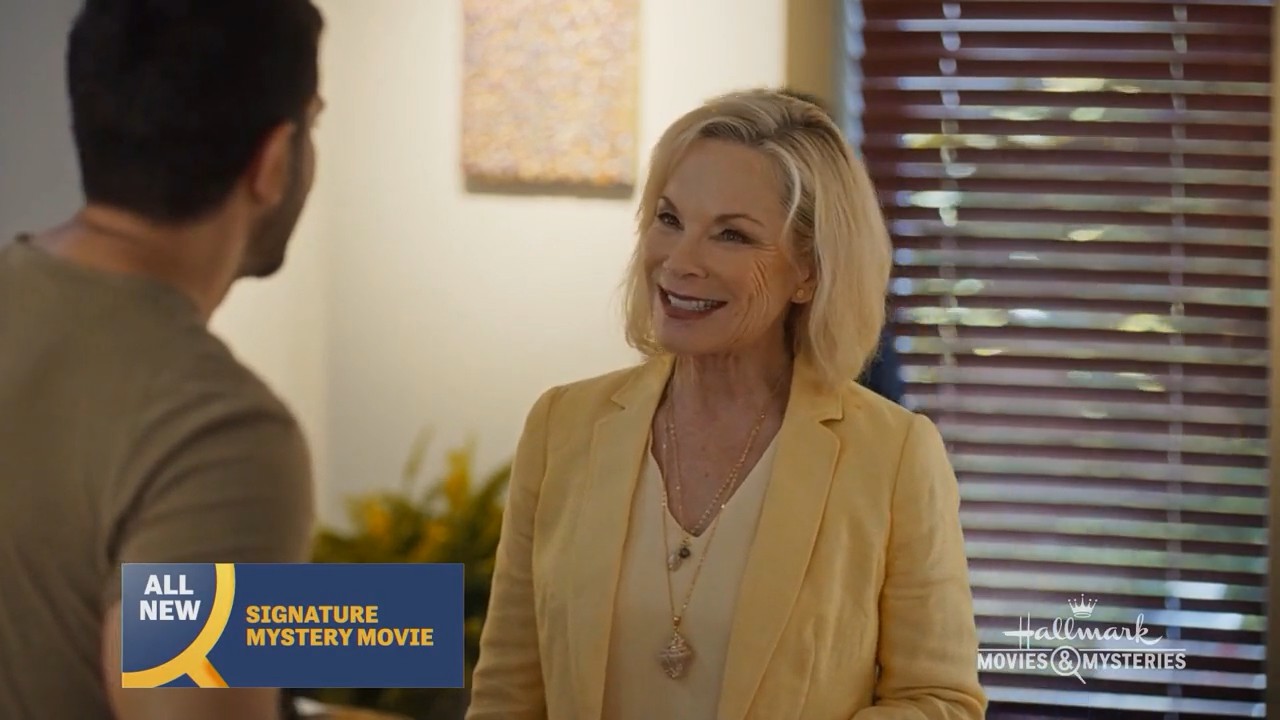 Ever since I’ve taken up interviews, I’ve really talked to all kinds of interesting people: Filmmakers, Producers, even Actors. Speaking of actors, I recently spoke to Camille Mitchell, a local Vancouver Actress who is so powerful, she’s getting incredible roles. Her latest roles include Hallmark movies, specifically Aurora Teagarden Mysteries: Til Death Do Us Part and Ships In The Night: A Martha’s Vineyard Mystery among some other movies this year. As I act myself at times, we made a connection so interesting that we learned about each other through one of the most fun conversations I’ve ever had. Camille told me about her Hallmark roles, which sound pretty fantastic, and what happened on set. She also explained some other interesting facts.

HNMAG: It seems you are getting a lot of Hallmark roles these days. Do you feel these are the movies you were suited for?

Camille Mitchell: Right now, especially the past year with COVID, somehow Hallmark has been the biggest employer in BC. It’s been amazing how it’s managed to get its protocols down to the point where some other film and TV productions were having a hard time organizing. It’s interesting because they’re an amazing company to work for. They take good care of the actors, they’re very hardworking. They have a certain formula for Hallmark that has some interesting tropes in it. They’ve been good to me, but my heart is still in the theatre. There’s not a lot of that going on right now.

HNMAG: And how does theatre differ from film?

Camille Mitchell: Just day-to-day life is very different. You’re in rehearsals for hopefully a good period of time, which is 6 days a week, 8-12 hour days. Then, once you’re performing, you’re at odds with everyone on the planet. You’re working the nightshift, your weekends and evenings are booked. Even though you’re living as a human being it’s a very different life. But with theatre, once the opening happens it belongs to the actor. Television is the writer’s medium as you know. Once you open, the director’s gone, if it’s a new play the writer’s gone. It’s sort of your baby, it’s a lot of responsibility and you can’t relax during the day if you have a night performance. But hopefully you’re working with a script that’s so inspiring to you as an artist and an actor that it brings joy.

HNMAG: You’ve also landed a plethora of other roles and are considered an unstoppable force. What keeps you going?

Camille Mitchell: I have to say, I just have the call. It gives me great joy, it was Picasso that said ‘Art dusts off the grime of everyday living’. I’ve done acting and I’ve also done some directing and writing which I enjoy. Just the moment-to-moment commitment of recreating a human being is very exciting. It lands on so many things I’m fascinated in, like human psychology, how we communicate with each other, through body language or facial expression. Also a well-groomed script with a lot of heart to it. Acting is an addictive business, that’s for sure.

HNMAG: So you’ve also done behind the camera work as well. How is that different?

Camille Mitchell: As a director, you’re responsible for the whole world. As an actor, you’ve got your own little piece of the pie which you’re responsible for. When directing, it’s so challenging and invigorating. The hours are nonstop with directing because your mind is always going. You’re figuring out the best way to tell a certain story with the scene. More importantly, how to keep the crew happy because I didn’t learn this until I was in my 50s. I was an older director, and I won one of the Crazy 8’s in 2012 which was fantastic. But it was a very interesting learning curve for me and a very enjoyable one.

HNMAG: How do you keep yourself stable when it comes to stress?

Camille Mitchell: I’ve been meditating for about 30 years, I find that really helps. I have two beautiful dogs that I hike with everyday, and I try to do some writing every day. I find close family and friends make it all worthwhile.

HNMAG: Now about Lena Miller in Aurora Teagarden Mysteries. How is this role different from other characters in the past?

Camille Mitchell: She is primarily a mother from a small-town. She has a very positive approach to life. She’s extremely optimistic about the marital union between Aurora and her son Nick. She’s really just there to celebrate. It was a really enjoyable experience on set, such a wonderful group of cast and crew. But halfway though filming, I dislocated my kneecap at home. We had the wedding to shoot and I couldn’t walk, I was on crutches which has NEVER happened to me during a film shoot. [Director] Martin Wood, and [Producer] Jim Head got it figured out. They put me on a dolly, and shot me from the shoulders up. That way, when I had to walk into the church I was being pulled by a crew member with my crutches tucked under a church pew.

HNMAG: Interesting. Were there any other challenges on set?

Camille Mitchell: Since we were filming in January and February, it was during COVID times before anyone was getting vaccinated and numbers were quite high. People were absolutely pristine about maintaining safety measures. You were always aware of it, you always had your mask on when the camera wasn’t rolling, you were always aware to keep your distance from people. We couldn’t really even eat together. People took their meals back to their trailers. It was very different filming during COVID. Part of the joy is getting to know the people you’re working with. It was hard to do that under those circumstances.

HNMAG: So COVID made it harder to work on set, but it all worked out in the end?

Camille Mitchell: Yes. It was just beautifully organized, and hopefully with vaccines, we’ll be moving forward to days when we can see each other’s faces again.

HNMAG: What is the biggest advantage of working on this series?

Camille Mitchell: For starters, the cast alone is a really wonderful group. Mary Lou Henner is one of the stars of the show as well as Candace Cameron Bure. The costumes and the set are beautiful. Part of the Hallmark brand really, are the films are very happy uplifting pieces. There’s not a lot of angst on the sets, the hours are very fair, well organized. It’s always a professional experience to be on a Hallmark set, and to be part of a Hallmark story is very fun. It’s also very interesting because they’ve all worked together many times before. I was the new kid in town, and I think they’ve done 14 episodes already of these hour-long movies of Aurora Teagarden. It helped me with my character, because she’s new and meeting these characters for the first time. They’re going to be her future in-laws, and it all works out. We were filming just outside Vancouver and in Abbotsford and learning about parts of BC that you never really go to unless you know people in that area. It was fun exploring around outside of the city.

HNMAG: Now do you feel Hallmark movies are more organized than other production companies? Or are they similar?

Camille Mitchell: Any production company that’s been doing the same brand or the same product for a long time really has it down. A lot of the Hallmark production companies here are really well oiled because they’ve been doing them for quite a while. A lot of the producers remain the same, a lot of the directors remain the same, the lead actors remain the same, and they all enjoy each other. It makes for a much more relaxed set or atmosphere, the crew know each other as they’ve all worked together before which is really rare here because we don’t have a lot of series that have been produced over the years here. Aurora Teagarden has been around for a few years and it’s really a pleasure to be involved.

HNMAG: Do you feel you can relate to Lena?

Camille Mitchell: I am a mom of a grown son, who’s also in the film industry. As the mom in this production, she has concerns about what is the best way to help him. I’ve certainly been in that situation where you watch their child grow. Something isn’t right for them and they don’t want to talk to you about it but you have to get your way diplomatically into a conversation. That was familiar territory. Also the closeness these two have. It was easy to be happy for his wedding, his marriage.

HNMAG: You’ve been nominated for a Leo recently and a few others in the past, do you see this getting a nomination or possibly an award?

Camille Mitchell: I’m not sure. The one I’m nominated for, as Lila Winchester, was an amazing experience. It was a very emotional and satisfying role. To be nominated for that made me very grateful. I’m hoping it’s airing soon.

And it IS airing soon. The movie Camille’s in, Ships In The Night: A Martha’s Vineyard Mystery will be coming out on June 20th, so mark your calendar to see just how amazing this lovely lady truly is. If you haven’t already seen Aurora Teagarden Mysteries: Til Death Do Us Part be sure to scope it out. Especially if you enjoy mysteries. With the roles she’s getting in her career, Camille Mitchell is showing no sign of stopping and is truly going to make history and I’ll bet she’ll win lots of awards too, not just Leo’s.