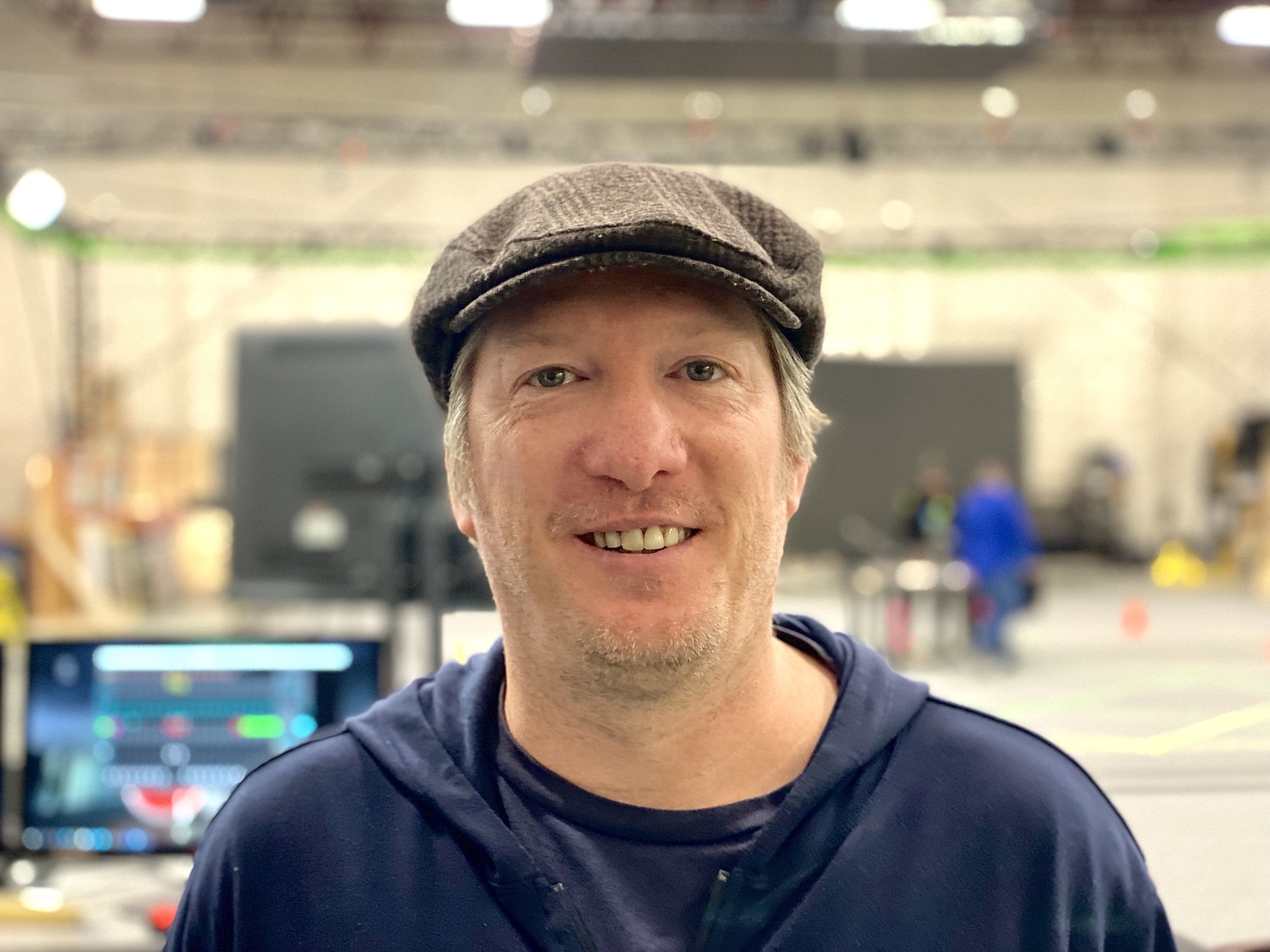 Lately, I’ve been talking to some interesting people, but now I dwell even deeper in the realms of interest as I explore the companies that work in editing and visual effects. One of those companies is Animatrik, which focuses on motion capture and virtual cinematography. Some of the coolest content out there has been designed by them, for both games and movies, as well as so much more to come.

I got to speak to Animatrik’s CTO and President, Brett Ineson. Our conversation was very worthwhile, and I learned a lot about his work and his company. So without further ado, allow me to set this interview in MOTION and CAPTURE your attention.

HNMAG: So you founded and operate Animatrik. Tell me, what are some of your main duties on the job?

Brett Ineson: Title-wise, I’m the CTO, and the President. It’s still considered a small business so we all wear a lot of hats. Most of the days I spend running the business but  a typical day could range from setting up cameras to dealing with insurance. A little bit of everything.

HNMAG: As someone who runs a small business myself I find it hard at times. Is it the same case for you?

Brett Ineson: It is sometimes challenging but we have a great team here so in terms of meeting the needs of the customers and our service level, it’s a well oiled machine. With such a high functioning crew it frees me up to fight fires in the background.

HNMAG: And you’ve created Animatrik for performance capture and developing new solutions for virtual production. What kind of solutions has your company come up with?

Brett Ineson: A lot of our intellectual property is wrapped around efficiency and level of service. We do have a core business, performance capture, and the way we’re doing that today is very similar to the way we were doing it 5 years ago. Except we build all kinds of software tools to perform a higher level of service more efficiently, and that covers everything from the control, to how long a director might have to wait on set. A lot of our innovation goes into the experience of the client.

HNMAG: What kind of technology and software do you use for performance capture?

Brett Ineson: It’s a mix of hardware and software. For example, Machine Vision cameras… a lot of computers and networking…. then most of the changing technology is on the software side.

HNMAG: And with technology increasing and upgrading over the years, how do you keep up with the advancements?

Brett Ineson: That’s sort of the fun part for us. I’ve always been interested in both computers and cameras, so it’s a good fit to keep me focused.

HNMAG: Before you started your own business, what other projects did you work on and what kind of business did you do?

Brett Ineson: I’ve moved back and forth between hardware and software development, on the B2B  side. I’ve worked for a company called Alias out of Toronto which was acquired by Autodesk from San Francisco and they both created real time software for performance capture. I also worked for Vicon Motion Systems which is a hardware manufacturer specializing in motion cameras. I stayed pretty in depth on the technology side through that kind of work. But then in-between, I would also go out to Film  and Video Game studios and work on the projects , getting experience on the production side as well. 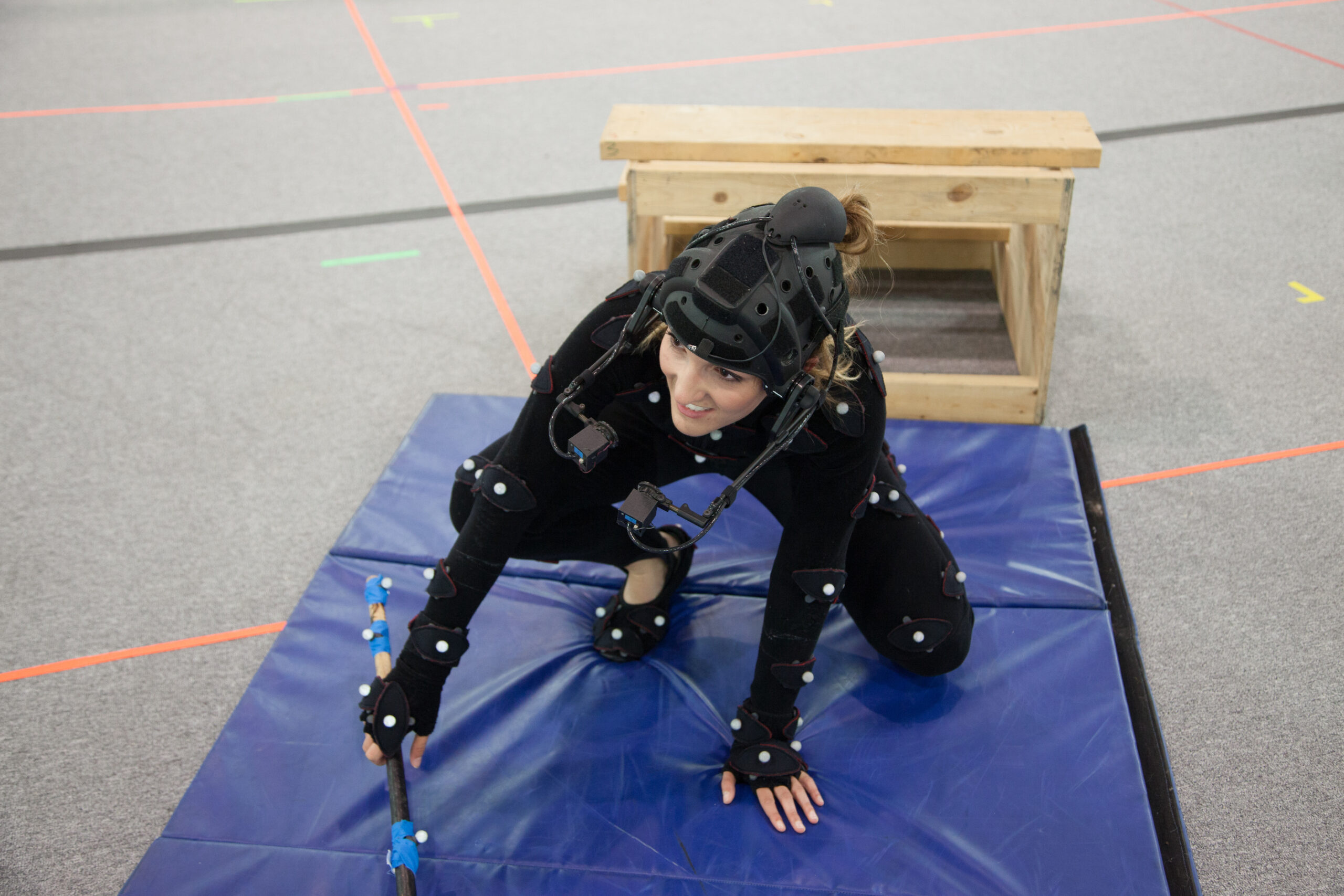 HNMAG: That’s interesting. What kinds of jobs did you do on the production side?

Brett Ineson: Probably the biggest one film wise, I went down to New Zealand and worked at a company called WETA Digital, where I worked on the LOTR series, specifically The Return of The King. In terms of motion capture and performance capture success, that was one of the biggest most exciting ones in the history of motion capture. Even though I was pretty excited about all of this before that, I certainly knew what I was going to do for the foreseeable future after working on that property. Then on the video game side, I worked for Shiny Entertainment in San Clemente, California and we did the Matrix video game.

HNMAG: For Animatrik, what do your facilities consist of in terms of stages and offices?

Brett Ineson: In Vancouver, we have a 15,000 square foot facility. 10,000 of that is the stage and 5000 is supporting office space. Then in California, it’s a similar building where we’re renting from digital domain with a stage that’s probably close to 10,000 square feet.

HNMAG: When it comes to hiring visual effects artists, how do you know who are the ideal candidates for work?

Brett Ineson: That one’s always a challenge. We have to find people with the qualities that we think would be a good fit and train them. We usually start with people who have an animation degree because understanding the end product of what we deliver is very important. If they have an interest in cameras, hardware, and software, that’s super great because then we know they’re going to be pretty good at what we do here.

HNMAG: Animatrik is a small company, but do you have any big clients? What have been some of the most ambitious projects your company has worked on?

Brett Ineson: Some of our clients are the biggest in the world in terms of entertainment production. We service Disney, Marvel, Sony, all the big guys out there. Electronic Arts, and Microsoft. Probably the most ambitious project we did was the Warcraft movie. That one was just the biggest virtual production taken on by any film, so to be part of that was the most challenging experience.

HNMAG: When it comes to person capture, can it be tedious at times?

Brett Ineson: If you have a lot of actors on stage and you’re trying to manage them it can be challenging. They might take off to go to the bathroom, have lunch, and change their suits when you need to keep on top of every little bit of tech they’re wearing but for the most part, it’s a pretty efficient process.

HNMAG: And what about prop design? Is most of it done in Visual Effects or do you use real life objects as well?

Brett Ineson: We do a lot of physical construction. Typically our clients will hand over virtual sets so we’ll get 3D versions of their film or game sets but we need the actors to interact with physical objects. We don’t want them walking through walls. If they’re in a spaceship for example, we pretty much need to build the spaceship on our set to interact with directly, even though it may exist already on the digital side when we deliver it. 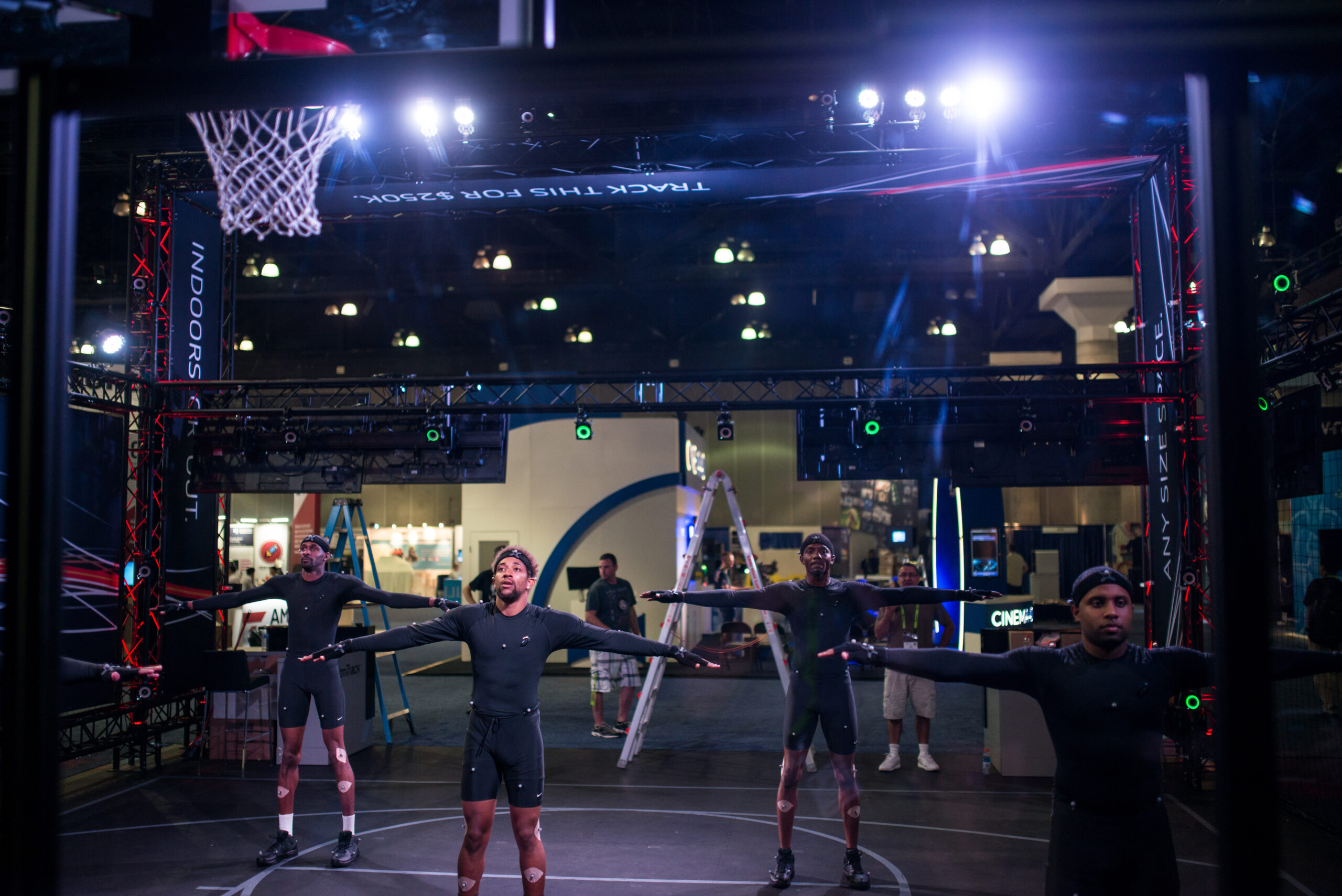 HNMAG: Do you have a variety of materials in order to build all these sets?

Brett Ineson: We do. Luckily this stuff doesn’t show up on film for the public to see anyway. We build stuff out of pipe and wood for the most part. It functions way better than it looks, typically.

HNMAG: You’ve also created quite a few animals like horses, dogs, and wolves. Do you plan to do more creatures in the future?

Brett Ineson: We’ve had some recent inquiries for elephants, and camels, even a beaver (laughs) so we’ll see if all this happens. There’s definitely an appetite in the entertainment world for realistic animal motion.

HNMAG: Will you be including other creatures of the mythical kind, like dragons, monsters, etc?

Brett Ineson: Those are usually quite a creative exercise because at that point for the most part you’re having human beings sort of puppeteering how a dragon might move so we’re still capturing a human but they’re moving their arms as if they had a giant wingspan and we’re retargeting that human motion to the creature motion.

HNMAG: Your business also mentions working in game engine integration so you must have a good understanding of games as well.

Brett Ineson: We do a lot of our work in real time and through game engines, so what we’re visualizing on set is a rendering from the game engine  itself.

HNMAG: What are some of the other big challenges Animatrik came across and how have you mastered them?

Brett Ineson: Some of the bigger challenges are trying to use optical technology in difficult areas. Maybe outdoors in the rain, on the side of the river, things like that. The way we get around that is using LED technology. For traditional motion capture, you bounce Infra-Red light, from a source attached to the camera, it bounces light off markers on the person. Then that’s the imaging you’re seeing back in the camera. If you’re outdoors with all the light pollution from the sun which is also Infra-Red light, you would never see anything. What we can do is adjust the camera’s aperture size and then put a very bright source on the actor. With current LED technology, you can burn those super bright so that’s one of the ways we’ve gotten around almost impossible situations.

HNMAG: Do you plan to extend your services to other branches of entertainment, possibly VR work?

Brett Ineson: We have and we do, we’ve done a few Virtual Reality games already. We’ve done Virtual Reality performance art and theatre type projects. We’re also starting to do stuff into the Metaverse.

Brett Ineson: We did 2 virtual concerts that were designed to be streaming shows but they were delivered and rendered in a video game dimension so they could live in the Metaverse. On our stage here we’ve done 2 or 3 circus projects that way through Shocap Entertainment. Then on sort of the more musical side, we did a Justin Bieber concert that was streamed through the Unity Game engine and also a Pentakill concert for Riot Games. 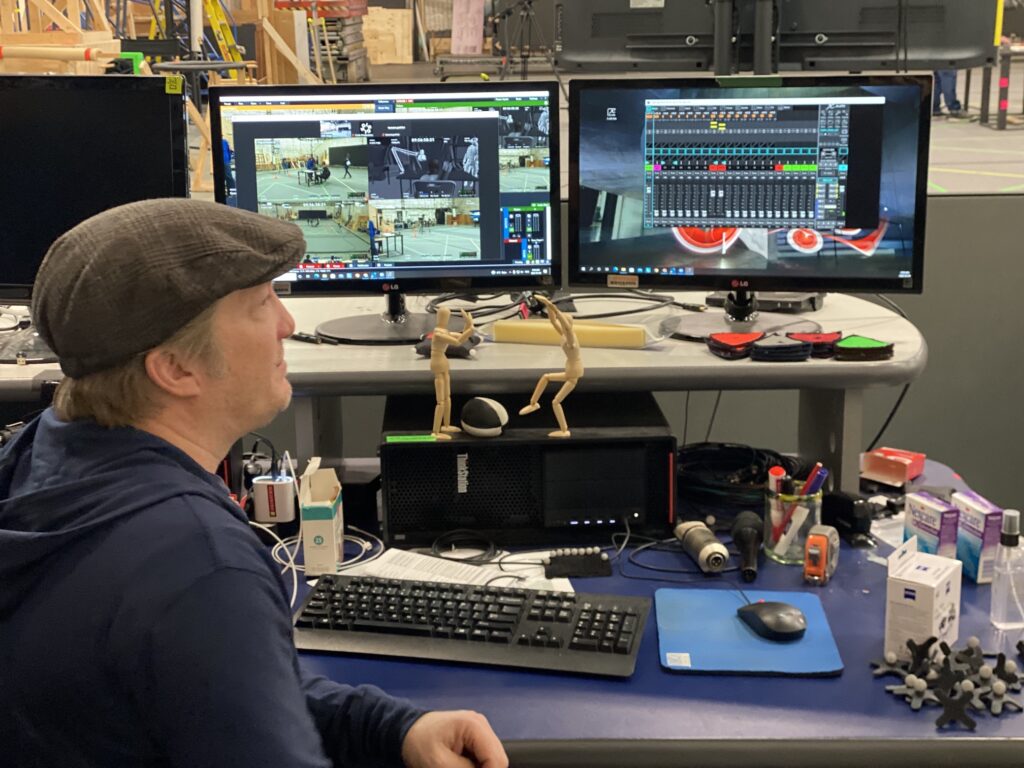 From what I’ve gathered, Animatrik is progressing more and more each day. In fact, it’s already got a lot of projects done, so there’s no telling what they could do next. I have high hopes for future projects as they venture into the Metaverse and maybe even further in what they make. Take a look for yourself and see what they could be up to next on their official site.