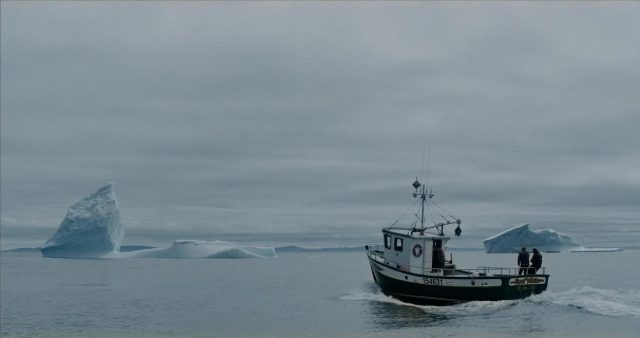 About a year ago, Newfoundland director Justin Oakey presented his 15-minute film Flankers and immediately charmed the festival circuit audience with a rough, hard-hearted story of feuding fishermen in the rural islands of the North. Rugged young men lock horns in the name of historic family feuds, still viscerally alive and bubbling beneath the hardened surface of the hard-working fishers — only to unite in the face of common danger.

Paying homage to his home, Oakey brings to the screen a region as rough as it is beautiful, filled with intense, stormy characters. As Oakey explains to HNMag: “The idea for Flankers, like all of my work, began with a series of true stories from the lives of my family and friends and then through the development process those stories intertwined and evolved into something a little more cinematic.” Real-life anecdotes transported onto the screen by brilliant actors, whose unflinching stares are hard to forget.

Flankers has received a huge amount of attention in festivals. Justin Oakey continues: “I am very grateful for the international screen time we got. I was most excited about the smaller screenings in remote areas (such as the Hebrides and Shetland Islands). I believe those audiences probably had the biggest connection with the material, and seemed genuinely surprised that the material was Canadian.”

For those who never have enough of wind-beaten men of few words and fiery feelings, Flankers is now to be followed by a feature-length film. Oakey tells us about the project: “My upcoming feature, Riverhead, is a project funded by Telefilm Canada, Canada Council for the Arts, and the NLFDC. It’s a gritty, atmospheric drama surrounding a generational feud in a small Newfoundland town. There’s no direct or obvious connection between the short and the feature, but common themes were first explored in the short and lead me to sink my teeth into the subject and create something larger.”

Referring to the festival circuit his upcoming feature is set to hit, the writer-director confides: “ I’m heavily influenced by the arthouse and independent films of northern Europe, so it would be nice to see if this film could rub elbows with them.” Indeed calling to mind the signature style of Scandinavian flicks that have seduced the world with their cold beauty, Flankers is a piercing composition of icy colours and crisp light, a brilliant cinematography and design complementing its natural setting admirably. Tough, grim, raw, and utterly charming.

After Scandinavian noir, will be talking about Newfoundland noir?