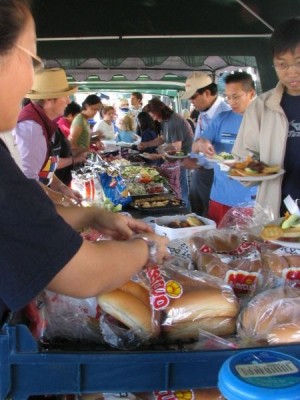 Final round of filmgoing at the East Van Short Film Showcase.

No Woman – An artistic film showing how women matter, in spite of the way they’re treated at times.  It states that women should be allowed to make decisions too. Very innovative and bold way of showing how to show what’s really behind the vileness of individuals as well as how women struggle in Islamic countries.

Cassis – As a woman sits alone in her house, waiting for her husband to return, she questions her relationship and why she struggles with it. Not too much to say here except that the setup was very well done.

Taste of Identity – Derek Kwan’s mini documentary showing several of his Vancouverite friends with their own cuisines and foods, all considered to be food of Vancouver. This film really captured the diversity of the town.

Dead Hearts – A morbid story about how a young boy named Milton (Valin Shinyei) falls in love with a blind girl named Lola (Dalila Bela) only to lose her and sink into an eternal depression. After killing himself off too, he rises up as a zombie. It’s a zombie love story that started out depressing and then it got kind of silly when the zombie part came in. Went a bit too far in my opinion.