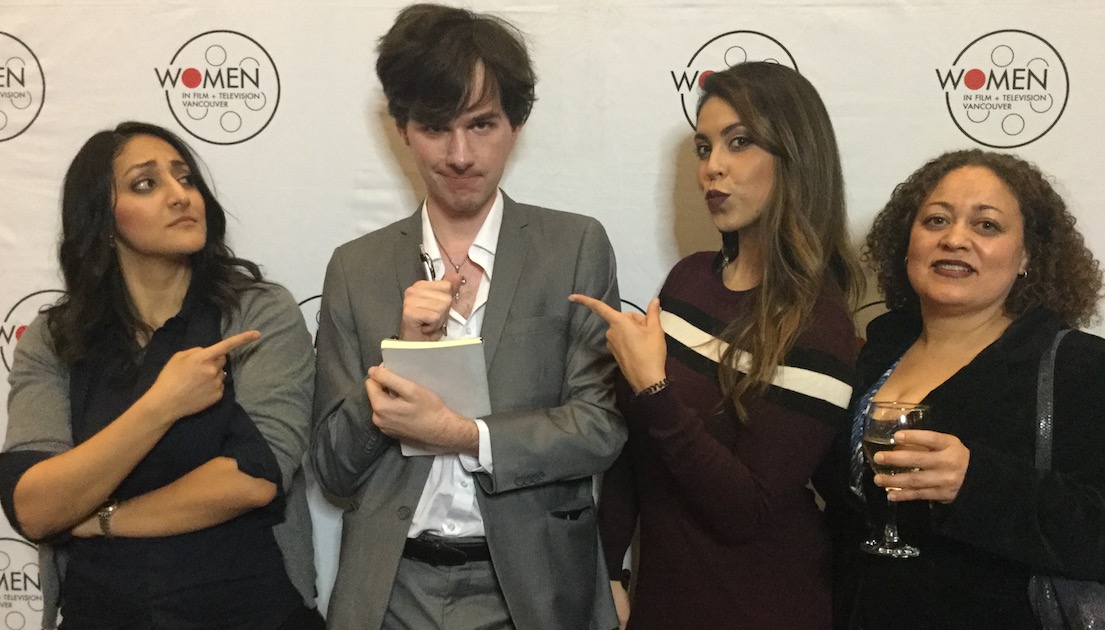 If there’s something that Darren and I enjoy, it’s seeing women show their creative side in the film industry. Truly, I think it’s awesome that women can make such cool films. Hey, it’s even a fact. Sadly, that’s hardly that many. But why? Shouldn’t there be much more? That’s what I say. In fact, I was raised with a mindset of any gender can do anything. I was always about equality and diversity. Well, this festival takes the shining projects and their filmmakers, and presents them in a stunning manner. In fact, the majority of the festival was women in attendance. Last time I was one the few men in a theatre was a few years ago when I watched a mushy-gushy love movie with somebody and everyone else there were women. However, that was uncomfortable unlike this event which was much better. Er, um, anyway, so I’d like to give some shoutouts to Sarah Kalil, Carolyn Combs, and Ariana McGregor for hosting this incredible event. A shoutout to Helen Yagi for making sure I got on the doorlist to multiple screeners at the event, everyone who made the event a possibility, and of course, everyone who submitted. Now here are the highlights of this whole festival!

Opening Night Screening and Celebration – To start the event off just right, the first night included the Canadian premiere of German feature length Dark Blue Girl. It tells the story of a little girl named Luca who shares a bond with her father, a much greater bond than with her mother, as her parents have split up but are planning to get together again when they all move out to a Greek island. But Luca doesn’t want her parents to get back together. A very dark film with a beautiful concept. Very impressive scenery and an ominous soundtrack that caused some intense vibration in the ears. Interesting fact is that Luca’s child actor Helena Zengel wasn’t originally chosen for the role but took over the lead role when the original cast child couldn’t make it. A very realistic film that shows parents can be afraid of their own kids sometimes. And a more realistic approach. Not all little kid films should be about a simpering sweetie pie anyway.

Anatomy of Violence – This actually came with a warning at the beginning stating anyone who felt uncomfortable about the subject matter could leave if they wanted. Sometime back in 2012, in New Delhi, a woman got gangraped by 6 men who invited her and her boyfriend aboard their bus. Now everyone knows how dreadful rape truly is, but they never think to look at the rapists perspective. Because most people would think it’s too messed up and not worth looking into. But this film decides to look into Rapist’s lives creating interesting stories showing that these guys went through some really rough times when they were younger. Shortly after that interesting perspective a panel discussion of some of the crew came in to discuss the issue even further stating the perpetrators aren’t fully responsible at all times, and the interesting fact how indigenous people aren’t always respected by the RCMP. Which brings me to the next interesting showcase.

Feature and Shorts Program : Indigenous Voices – If it isn’t just women who aren’t so commonly heard, it’s also those of the indigenous tribes. There weren’t too many of those films, and I kind of wish there were. First up was short documentary Nosisim, told by Sonya Ballantyne as she discusses her aboriginal grandma. A very interesting way of telling a story accompanied by illustrations. After that came a self-documentary on Thirza Cuthand who discusses the struggles of being Indian/white. A very truthful and strong story, it’s also sad to see things like this still happen. Wrapping it all up, was possibly one of the best most realistic films I’ve seen: River of Silence. When a couple’s daughter goes missing during a trip to her Grandma’s, the whole family gets involved and forms a search party to find their missing member. Some friends even come to join in. This one had a great story, with lovely forest scenery, beautiful music, and intense feeling for the family. This was based off experiences of collective pain, and of course, it even shows just how helpful cops can be. That last bit was sarcasm.

Panel Discussion : Gender Balance in the Film and Television Industry – Hosted by Sharon McGowan, the panel consisted of many ladies with lots to talk about. Janine Steele, Director, Production & Operations at the National Film Board of Canada’s Digital Studio, brought up the subject that it took 2 years to reach the NFB’s goal of 50% of projects directed by women, even stating that women need to be more widely recognized and increased in departments of soundtrack and DOP. Doreen Manuel, who serves as an activist for 1st nations explained her story and how she felt there needed to be more 1st nations stories about harrowing childhoods much like in Indian Horse. Susan Brinton said she had plans to change the CRTC committee who have plans to attack broadcasters. These women mainly talked about the hardships of talking with certain broadcasters and companies, talking about how women should be respected, especially those in the new arrival of VR. A very educational panel that really got the points across.

Feature and Short Films Program: Strong Women – An impressive look at the message that has been said through the majority of this festival. Reel Women Seen provided a hilarious inner look on women in the film industry, Owning The Space provided an important story about women who worked hard to make change, Handmade Film had shown that Lindsay McIntyre took great risks and interesting methods to get into filmmaking with her equipment, The Women Who Run Hollywood was an amazing inside look on women who were famous and provided long lengthy explanations into their impacts which even I didn’t know about, Finally, I am Rebecca told a heart-wrenching story about a woman who happens to be a refugee from Sudan, even exploring her past and her personal issues. This showcase proves women can change policies and direct awesome films.

Artist Talks – Scattered throughout different times in the festival, the Artist Talks were little lobby discussions where women in the industry (specifically those who submitted) talked about their life journeys, how they got to where they were, and interesting secrets on how their productions were made. More educational content.

WIFTI Showcase – A large array of short films from international Women In Film associations, there was quite a lot of variety with these different types of short films. Havana Hustle, Fortune Teller, and Priyanath were all interesting short films with very simplistic visuals and stories. Sore Eye, Nuestra Prision, and Acid Test seemed all much more extreme in the terms of abstract with over-the-top weirdness.

Program of Short Films: From Haunting to Horrific – Just like VSFF, VIWIFF has also decided to show horror films as well for one particular segment. Someone once told me horror films are all the same: Some dumb broad gets killed. I don’t think films like that would even be permitted to showcase here. Not to mention modern day horror films are much more different. They did get showcased here, not all of them are exactly horror films though. Mind Stories, and Waiting For Spring: Persephone and The Pomegranate had more of an artistic approach. Then some of the others, like Nikki Saltz’s Smile, and Mates by Hannah Dougherty came off as funny horror, more or less. Despite some of these being abstract, or already viewed several times (sorry but variety is bleak in this city) there were still some quality short films. Real Artists gave a glimpse into what Pixar/animation companies will most likely be in the future, and I really enjoyed the intense fight scene that happened in The Drop In, I never knew Dr. Rebecca James of Murdoch Mysteries was skilled in unarmed combat.

Prodigals – A semi-hilarious and intense feature, Prodigals tells the story of Wesley as he returns to his old home in a small town. Why? To serve his friend’s younger brother, who may have been charged for murder during a fight in the parking lot. But evidence isn’t fully legit and let’s just say Wesley has other plans while he sticks around. Specifically trying to fix problems with someone he knew in the past. Impressive shots, fulfilling story, and a load of fun to watch.

Closing Night – The entire had finally concluded last night with an awards ceremony. Considering the other events I attended, the theatre would sometimes be bleak in the front rows, giving me lots of space to stretch out. Tonight, there were so many people in attendance. I didn’t expect the theatre to pack up so soon. Lots of awards were handed out, but not every winner was in attendance. Not only that, but it’s not often that the opening film at a film fest gets loads of awards. I’m not kidding, Dark Blue Girl got more awards then anything else. It won Best Editing, Best Musical Score, Best Screenplay, Best Director (Mascha Shilinski), and Best Feature. Concluding that was none other than the usual afterparty like most nights where people drank alcohol and talked amongst each other. Throw in some live lounge music as well to make discussions have a genuine soundtrack.

This was an amazing film festival to attend. I’m glad I got involved. As mentioned before, women really can do just about anything. Those scientists who called females the weaker sex clearly didn’t study their research hard enough.