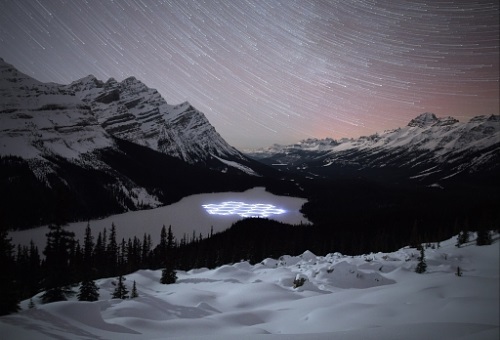 (Via PRNewswire) Here’s a stunning video that shows the kind of art you can create with simple tools, a lot of talent, and the Canadian landscape.

Snow artist Simon Beck “creates perfect, detailed geometrical designs using nothing more than a traditional compass, a map drawing and a pair of trusted snowshoes to make carefully-planned tracks in the snow.” Beck visited Banff National Park last month to compose several large-scale snow drawings — and the process was captured in a time-lapse format to create a video montage entitled #ProjectSnow. The two and a half  minute video is presented to viewers by The Upthink Lab, an Atlanta-based boutique production house. “Light drawing” effects, which retrace the artist’s path with LED lights, were used in the montage.

Beck spent some serious time out in the cold perfecting his creations. The 450-metre snowflake that he drew on Peyto Lake took over six hours to finish. After that, he went on to create  the images of a howling wolf at Lake Louise Ski Resort and then an elaborate maple leaf at Sunshine Village.

This is the British artist’s first visit to Canada. With a degree in engineering from Oxford University, experience as a cartographer, and a love of the outdoors, Beck began his creations in 1994 with a star drawn on a small frozen lake.

As for his impressions of Canada, he says “This is how God intended mountains to be.”

You can read more about the project here.