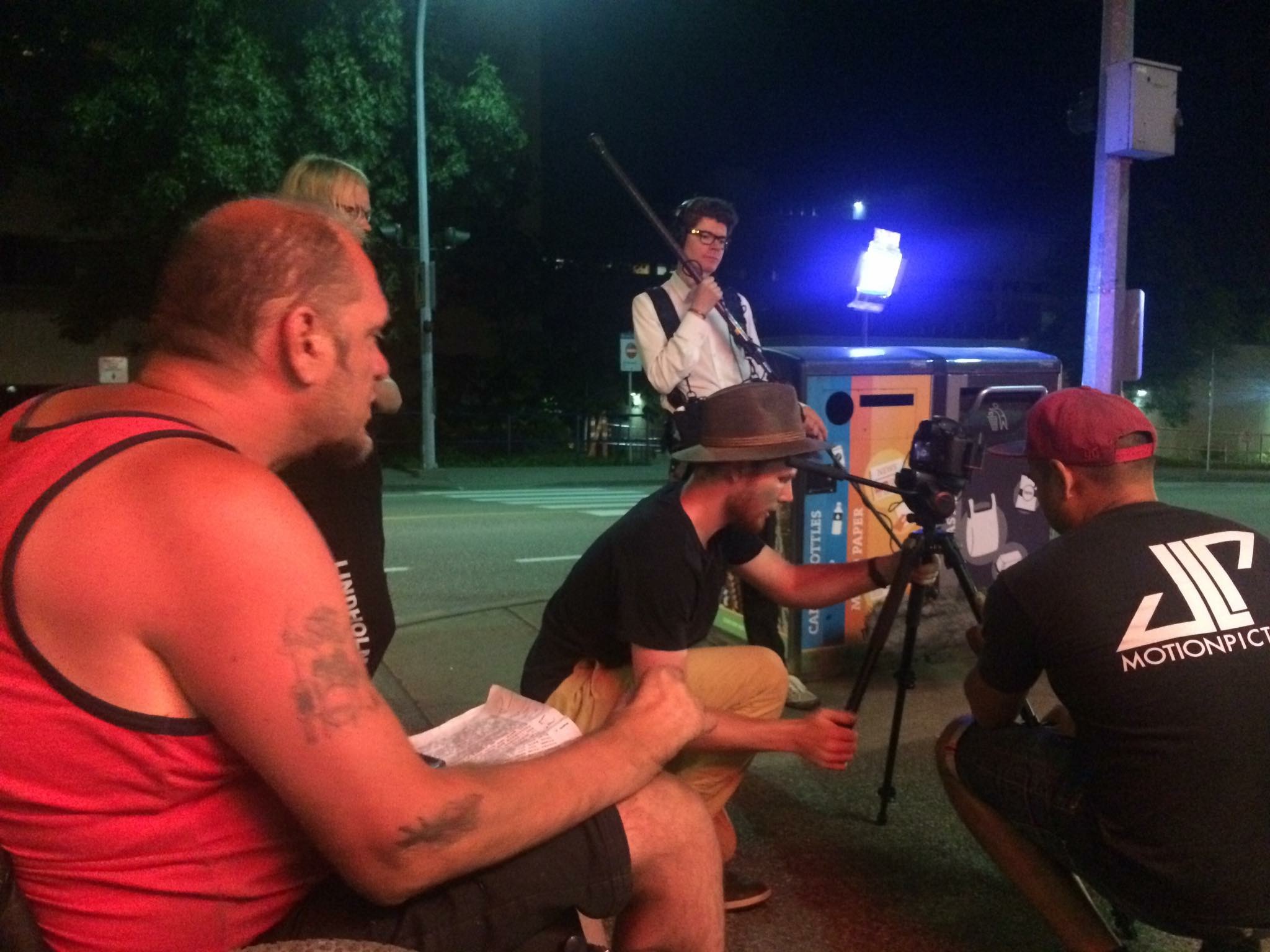 I recently took the plunge and made a short film. It only took one day to film but it was a sixteen hour day.  I still feel guilty for making everyone work such a long day.  It had been three years since film school and I knew I’d make some mistakes. I’d like to take this opportunity to share my experience in the hopes it might better prepare other budding filmmakers embarking on their first film.

Allow me to start from the beginning.  I awoke one morning after a very peculiar dream. I was visiting a filmmaker on behalf of Hollywood North Magazine and he was discussing his latest feature film.  I was hanging onto every word with my trusty voice recorder capturing it all. Suddenly his wife interrupts and approaches him holding an iPad. She is showing him photos of a terrible car accident and the injuries sustained.

“I can save that mans foot”, says the filmmaker. I thought to myself,

“You make films, are you going to call up the make-up department?” I had to ask, “How?” He then replies,

“In addition to making films, I’m also a surgeon. I’m sorry, but I need to go to the hospital.”

The dream ended there and I awoke with a bout of anxiety and a troubling thought in my head.  Here’s an individual that’s a talented filmmaker and a brilliant surgeon. What was my dream trying to tell me? I soon figured it out and concluded that I wasn’t applying myself enough. I moved to BC from Calgary four years ago for film school but hadn’t made a film since leaving school. Instead I’d been listening to other filmmakers talk about their films and in return I’d provide coverage.  I could be doing so much more with my time. Time had suddenly become my nemesis and I had to take the plunge asap.

I may have acted with impulse but I posted adds on a few websites seeking a crew and actors that very day. I had a rough draft of a short experimental film I wanted to produce and I dove into the pre-production phase with a vengeance.  I gave myself one month to plan and have all the players on board. To my surprise I had an abundance of interest from crew members as well as actors. It was going to happen and I hadn’t even figured out my budget, nor had I calculated the equipment I’d need to rent.   It was beginning to feel overwhelming and very rushed. Looking back, I would’ve allowed two months for pre-production.

I finished the script and worked out the bugs. I met with my DOP and was informed of the equipment I needed to rent. Because the crew and actors were all volunteering their time I had to ensure they’d be fed well. I had a micro budget so I bought all the food and barbequed for everyone the day of the shoot. It was extremely hot on that July day so I also purchased a large canopy to use for shade. I provided cold beverages but ran out half way through the day. I had written up a shot list but couldn’t get my printer working properly to print it off. Luckily, one of the PA’s had brought a copy.  I had attempted to purchase film permits from the city but was refused because the park I wanted to film in was considered too new. After consulting with a location manager, I had concluded that I’d film it gorilla style.

The day had arrived and everyone showed up on time with a great attitude. I had only anticipated three hours of filming in the morning, taking a lunch break and then another three hours of filming to complete all my shots.  As it turns out, making films can be unpredictable.  The shots took three times longer, mostly because I had failed to have a rehearsal before shooting. Half way through the day, the strain began to take its toll. At one point, I seriously considered telling everyone that I had made a mistake and we should stop. Luckily I’m stubborn and not a quitter. So many people had volunteered their time and energy, how could I tell them it was all for nothing?  After our lunch break I’d caught my second wind and the passion had returned.  Adrenaline kicked in and we were back to full steam ahead. Then the cops showed up. Someone had reported our camera operator standing on the street filming a sidewalk scene. I promised the officer it wouldn’t happen again and provided my personal info to him before he was satisfied enough to leave.

We continued filming until 2 am. I thanked everyone and promised I’d have post finished within a month. The next day I installed Avid into my computer only to find out that my operating system was outdated. I’m currently in the process of upgrading it.  Long story short, I made a film being very unprepared. Would I do it again? In a heartbeat. The excitement, the people you get to work with, the creative control of writing/directing, the feeling of creating something unique to share with the world all made it so worthwhile. Post production will eventually be finished and I’ll submit it to as many festivals that will accept it.

Making the film was a huge learning curve but somehow it all gets worked out. I can’t wait to make another one, with all the lessons I’ve learnt from the mistakes I made. I’ve always believed you can learn more from your mistakes than you can from not making any.  One more thing I’d like to mention, I use a wheelchair. If I can make films, so can others. Face your fears but put the time in for your pre-production.  Your crew will thank you and you won’t be filming for sixteen hours.

One thought on “Making A Short Film”