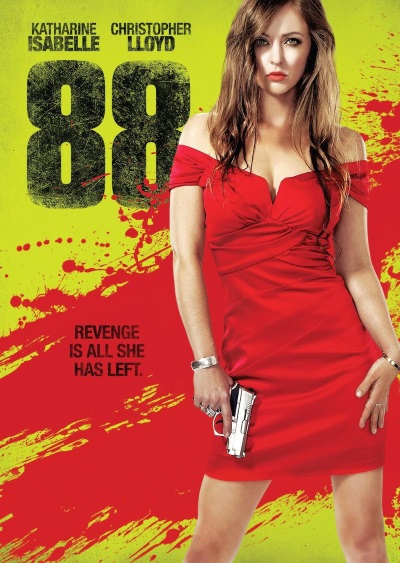 The Canadian produced film 88 is labeled as an action movie and, going by the poster, was supposed to be the most intense amazing film ever. However it was a bit of a mixed result for me.

The movie is all about a young woman named Gwen (better known as Flamingo to her friends) who’s on a hunt for her former boss Cyrus, as she believes that he’s the one who killed her boyfriend, Aster. With the help of her new friend Ty, Gwen travels to several different locations to confront Cyrus.

In the beginning of the movie, we see Gwen at a diner, suddenly snapping and instantly making herself suspect to the police. The rest of the movie cuts through different sequences showing how she got to the diner, as well as her journey in search of Cyrus while fleeing the law. Gwen also recalls details of several deaths, causing her mental condition to deteriorate.

At first the movie was a little confusing, because the jumping from one past moment to another was somewhat awkward. There was no chronological order for them, and there wasn’t much explanation at first about these flashbacks. They didn’t really make sense until a little more than halfway through the film. Near the end, most of the story began to make sense and show just how well written it was.

Characters were quite believable in this movie,  which was what really made the story work out. Katharine Isabelle’s acting as Gwen is genuine and impressive, making you enjoy the intensity of this character as she struggles. The artistic shots done by the D.O.P. are finely planned out. The use of rack focus from Gwen to a background prop gets the viewer into Gwen’s perspective and the use of the colours within a basic shot make it stand out much more.

88 is worth checking out.