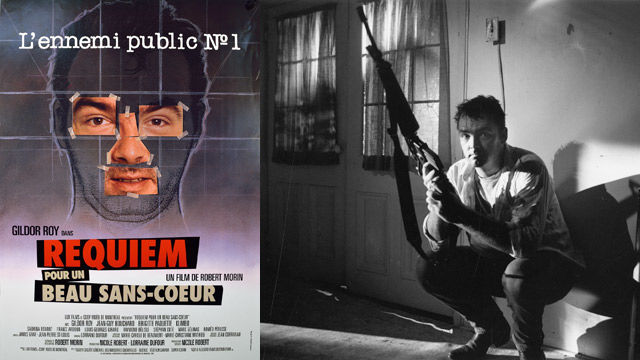 (Via CNW Telbec) The restored Quebec classic, Requiem pour un beau sans-coeur, will return to the big screen in a free showing at Fantasia International Film Festival in Montreal on July 26th at 6:30. It appears courtesy of Éléphant : mémoire du cinéma québécois, in partnership with Québecor.

The 1992 Robert Morin film, starring Gildor Roy, traces the last three days of convicted murderer Louis-Régis Savoie, who escapes from prison during a visit from his son. Eight different people he encounters give their versions of what happens then. The word “requiem” in the title tells the viewer, in advance, what the outcome of Savoie’s final confrontation with the police will be. But whether he’s “beau” (beautiful) or “sans-coeur” (heartless) seems to depend on who’s talking. And nobody will admit to tipping off the police.

Since its creation, Éléphant has restored 225 films, which it offers through video on demand via illico, and also in free public screenings at Cinémathèque québécoise and the Musée national des beaux-arts du Québec (MNBAQ). (And yes, they’re subtitled.)