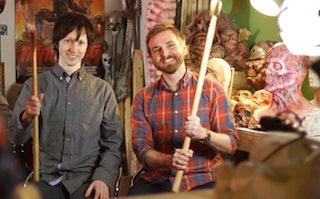 (Via WireService.ca) A small town cop battling a terrifying series of gruesome otherworldly creatures in a rundown hospital is at the centre of The Void, a new independent horror film soon to go into production by cult indie directors Steven Kostanski and Jeremy Gillespie and producer Casey Walker of Cave Painting Pictures. And those creatures have top priority when it comes to funding.

The Void’s crowdfunding doesn’t follow the typical pattern of raising money a few weeks before shooting. This often relegates effects to post-production. Not in this production.

“Through crowd-fundraising support,” says producer Walker, “Cave Painting Pictures intends to buck that trend by prioritizing the pre-production period and permitting Steven and Jeremy to get a head start in the development of the various creatures that will terrorize the heroes of The Void.”

They’re taking contributions at IndieGoGo, where you can also see the proof-of-concept teaser (and yeah, there’s gore and terror, so you’ve been warned). You can see more at their official site.

Kostanski’s and Gillespie’s past work includes directing Manborg and W is for Wish from The ABC’S of Death 2. (The Void marks a change for them, from parody to more serious stuff.) They’re also both design and FX artists that have worked on major Hollywood productions. Walker’s credits include A Little Bit Zombie (so, plenty of experience with deadly creatures there).

The Toronto-based filmmakers are asking people to help them make monsters, buck the post-production trend in effects, and, as they put it in the teaser, “join us on this journey — to hell.”