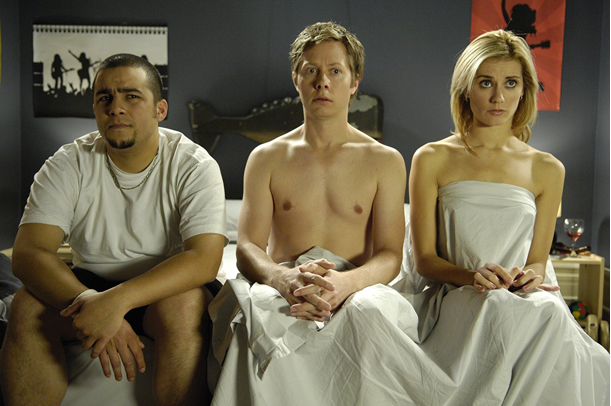 Even if you aren’t aware of the contents of Bill C-10, you may recall the controversy it attracted a decade ago. A clause within called for tax credits to be denied for films that contained content “contrary to the public policy”. Outcry was swift and vast with celebrities such as David Cronenberg, Sarah Polley and the mayors of our film industry cities (Vancouver, Toronto, and Montreal) loudly protesting that such a measure was tantamount to censorship and would severely impact filmmaking in the country. At the centre of all this brouhaha was a small film that had recently premiered at the Toronto International Film Festival. A film that dares you to say it’s name aloud: Young People Fucking.

The film is comprised of vignettes depicting five different sexual encounters between urban twenty-somethings. The Best Friends introduces Matt (Aaron Abrams) and Kristen (Carly Pope) who are frustrated with being chronically single and decide to add “benefits” to their twenty year friendship. The Couple focuses on Andrew (Josh Dean) and Abby (Kristin Booth) who attempt to spice up their lacklustre sex life with a rather probing new toy. The Exes sees Mia (Sonja Bennett) and Eric (Josh Cooke) throw caution to the wind and pick up where they left off in the bedroom. The First Date witnesses the seemingly naive Jamie (Diora Baird) inviting suave womanizer Ken (Callum Blue) up to her place on their first night together and finally, The Roommates delivers us some three-way action in the form of couple Gord (Ennis Esmer) and Inez (Natalie Lisinska) inviting the awkward, but well-hung Dave (Peter Oldring) to join them between the sheets.

The title may be dirty, but the content of Young People Fucking is surprisingly tame with only a few bare breasts and a strap-on dildo pushing the film to an R-rating. The stories are firmly rooted in the context and emotions that surround sex. In fact, the film sets a rather rigid structure for itself, breaking down intercourse into six distinct steps: prelude, foreplay, sex, interlude, orgasm and afterglow. This is ultimately to the movie’s detriment as it more or less forces each of these interwoven segments to move in lockstep with each other rather than at their own pace. One can’t help but wonder if these vignettes would have played out better sequentially.

The stories themselves are all over the map. The Best Friends is the clear winner with Pope and Abrams delivering knockout performances that will leave you rooting for a follow-up with these characters (YPF:10 years later anyone?). The Roommates is the most fun of the bunch with Ennis Esmer stealing the show as the exuberant-but-insecure Gord. The Couple starts off well, but it’s questionable stance on consent may leave some limp. The First Date’s leads are easy on the eyes, but the twists and turns it dives into may have been better served in a longer form. The Exes is utterly forgettable to the point where you feel completely lost every time the film cuts back to these bland characters.

Interwoven anthologies like this are always a gamble with the audience’s attention split five different ways. Theres fun to be had and lessons to be learned, but ultimately the vignettes really don’t add up to anything substantial enough to make this 90 minutes satisfying. But with the failure of Bill C-10 failed to pass through the Senate before the 2008 election, there is an open door for any filmmaker wishing to explore this material with Canadian tac dollars in the future.