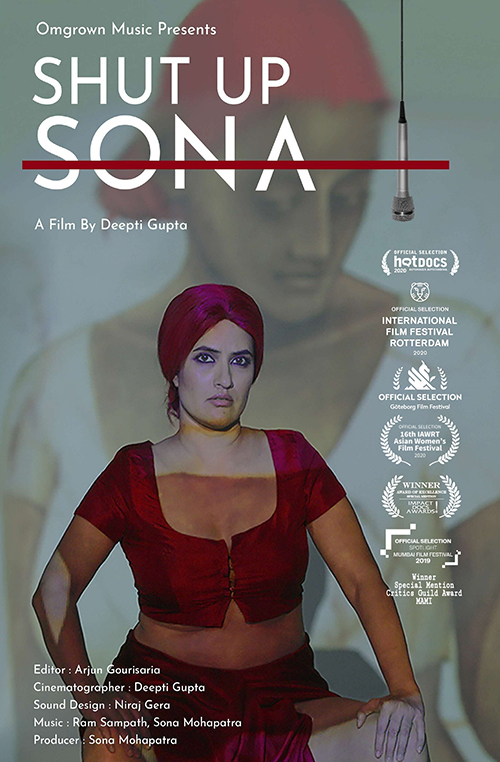 Artists and Filmmakers are generally misunderstood almost anywhere and everywhere. I of all people should know. Art comes in many forms, like pictures, movies, games (in a sense) and even music. Which is the subject of this documentary. Aside from being heavily focused in the film industry, I also have a huge interest in music from many other countries (I think I inherited that from my mother). This is one of the more interesting concepts I’ve seen, a documentary about musician Sona Mohapatra and her personal life both on and off stage. It shows Sona as she attends multiple events, talking to the media and singing her songs with elaborate performances. We also get a closer look offstage at Sona as she deals with financial issues, how there are more men than women performing in Indian festivals, and negative comments about her performances from both trolls and news outlets.

But despite her frustrations, her husband Ram stays by her side to make her feel better and support her the best he can. Her manager Amit shows support as well in whatever challenges come her way. Sona still wants to make herself heard as she’s not like most singers, rather she’s an activist singer. So she likes to use her music to prove points. Sona calls out issues such as sexism, and even tries to prove she’s simply an artist even if the country of India frowns upon her style of expression. It’s quite interesting to find out and discover that most Indian singers are male. I used to think it was more women but I was wrong. Plus, not many women wear elaborate costumes or come up with enchanting dance routines and song concepts together. But the inspiration comes from somewhere sacred.

During some of her time, Sona goes to explore an ancient palace and admires sacred land. Sona also explores the streets of India to scope out Krishna’s birthplace and study more Indian culture. It’s a lot of stuff I’m not too familiar with, but it’s very interesting. Sona uses her discoveries to express herself and continuously be a rebel artist thanks to a woman who inspires her and does it to ignite a fire of hope for people everywhere. But sometimes that fire burns out of control when negative feedback gets spewed on like gasoline.

No, being a celebrity is not an easy life. It may seem to be mostly negative attention, the tight schedules and all the stress of making content that makes it one of the worst jobs, but it still has its advantages sometimes. Deepti Gupta really goes into details on Sona’s life and we get an interesting inside look. The shots and layout of the whole documentary are well arranged, the editing is very efficient, and the work is well done. I honestly understand some of these issues myself. My family has occasionally had issues with voicing opinions usually with people giving little to no support for our statements. It’s a big issue that not everybody realizes, and especially those who say vulgar statements don’t understand artists or musicians. This documentary is a good way of looking into the perspective and seeing things the way they should be seen. To all my artist and filmmaker friends, keep on expressing.