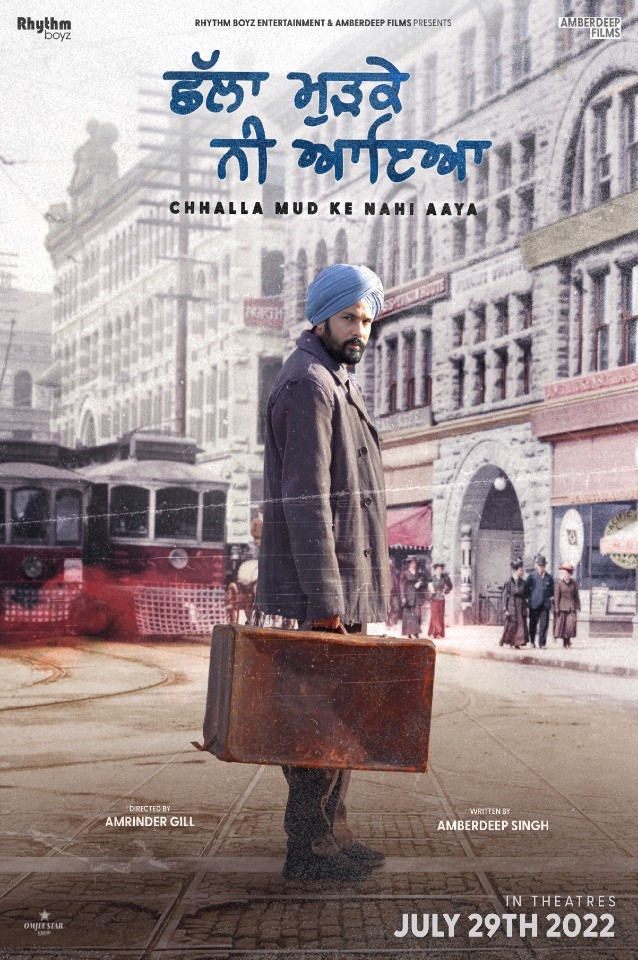 Chhalla Mud Ke Nahi Aaya (“Chhalla Didn’t Come Back”) is a tribute to the early struggles of the Punjabi/Sikh community in Canada. But it’s also the personal story of Chhalla Singh (Amrinder Gill, who also directed as well as singing on the soundtrack), a young man from rural Punjab in the early 1900’s. Early in the film, Chhalla realizes that cash is the key to a better life – and also, that he has no chance of earning any if he stays in his village. His loving but unambitious family doesn’t share his vision, so one night he simply walks out and heads for Canada by way of Kolkata.

On the long voyage, he befriends another new guy, the always befuddled Naajar (Karamjit Anmol), and the two are mentored by the more experienced Fauji (Raj Kakra).

At their destination, a tiny logging town in the snowbound mountains of BC, conditions are harsh, both in the bunkhouse and at the sawmill. Discrimination is a given. “Those men have families waiting for them,” explains the manager when the Western workers get off shift earlier than the Indians. “And you came to this country to work.” For all that, they earn less than the others.

Still, the small community is mostly peaceful and tolerant, and the Punjabi workers try to take care of each other. Letters from home keep spirits up, even for the illiterate (though those who read the letters to them don’t always share the more distressing news).

This is the point where we might expect to see Chhalla’s ambition take over and drive him to do anything for money, but instead he stays uncorrupted and grows as a person, helping others and finally reaching out to his family back home. He also grows close to Bella (Sydney Eberwein), a beautiful Italian immigrant working as a maid for the mill owner’s family.

Eventually, an anti-Asian backlash travels up from Vancouver in the form of the Asiatic Exclusion League. Although the AEL only manages to recruit a few men in the logging community, it has one important member – Kimble, the callous sawmill manager. And he’s plotting to become the owner of the mill.

We don’t see the AEL’s violence, just its aftermath – a Chinese business after they’ve trashed it, Chhalla’s injuries after he angrily confronts them. There’s surprisingly little violence throughout the film.

Chhalla tries to stand firm and rally the other Punjabis, but eventually it’s all too much for him. Once again, he leaves secretly by night. Despite the title, Chhalla does go back to his village.

He now has money and everyone’s respect. He brings in a teacher for the children and encourages the women not to let their veils block their vision. Relatives begin matchmaking for him, and they seem to find a good match in an outspoken young woman named Jeeto (Sargun Mehta, a standout in this small role).

Is this where Chhalla’s story ends, in the same place it began, with life a little bit better?

He’s still hearing about the troubles of his old friends in Canada, and he can’t forget them. He certainly can’t forget Bella . . .

This is a gentler film than the audience may expect given the subject matter. It moves slowly, taking time for plenty of humour which the characters use to lighten their harsh lives. It touches on many of the universal aspects of immigration. It may be too optimistic in its vision of what a multicultural Canada can and should be.

There are small technical issues with such things as sound sync and English subtitles, possibly a result of post being still ongoing just days before the release date.

Ultimately, though, Chhalla Mud Ke Nahi Aaya  is a warm and enjoyable couple of hours, and a worthy tribute to an important community.