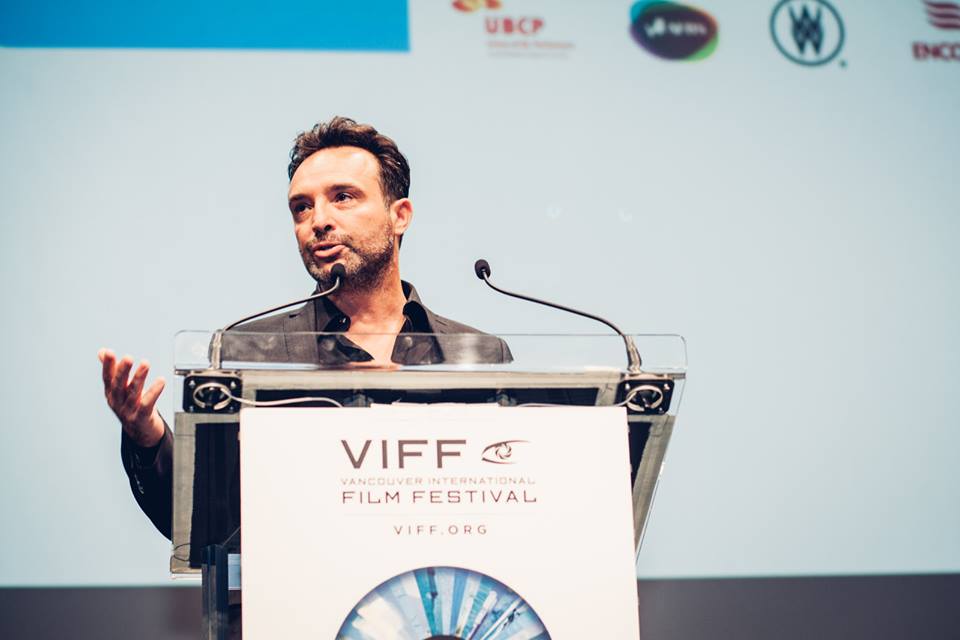 Why do we fall in love with movies? Is it the characters, the brilliance of the cinematography or is it because we’re tucked into our seats, feeling safe with our bag of popcorn as a shield as we watch someone else’s life unfold in front of us. Do they know we’re watching? The theatre is so personal, it’s intimate and at the same time it’s a meeting of the minds. You’re shoulder to shoulder experiencing the same story but with a different result. We’re all moved emotionally by a character going through an experience you might know too well or not at all. I remember being in the theatre years ago watching The Bucket List with Morgan Freeman and Jack Nicholson. When Morgan’s character died of incurable cancer, I totally lost it. My mom had passed from cancer a few short years before. The pain of that memory shot through me like a bee sting.  Combining an incredible story with the right actor is pure magical and will resonate with you days or even years after.

I like to believe I met an actor that possesses that type of magic. He’s been in over 120 productions, he’s award winning and Canada’s critically acclaimed John Cassini. He can truly carry a role like a power lifter. If the story is about your brother, uncle or father then John will convince you that they’ve somehow been morphed into him.  He will even remember your birthday. I don’t know how he does it so I just had to demystify this anomaly. Because he stays so busy with recent projects, True Fiction, Volition and Daughter soon to premiere at VIFF, you might think he’s an impossible actor that gathers no moss but I happen to know a girl that knows a guy that knows a pilot that knows an agent. Long story short, John’s people got ahold of our people.

“You’ve been so busy lately, I found at least 6 films and TV series you’re involved in just this year. How do you find the time?”

“I believe they’ve had European premieres and it’s actually quite a coincidence. I’m kind of Gobsmacked and very grateful that two films, True Fiction and Volition are premiering on August 24 in London at the 20th Anniversary of FrightFest. I’m pretty excited and wanted to go but work prevented me. I’m also pretty excited about another film, Daughter that I co-produced and also play the lead role in. It’s very close to my heart and is having its’ world premiere at the Vancouver International Film Festival, in the BC Spotlight category; I’m pretty stoked about that.”

“In the films, True Fiction and Volition your characters are quite different. What was your process/method for switching gears from one character to the other?”

“Thankfully there was some distance between each film. Volition is a film that the writer/director, Tony Dean Smith and I have been talking about for a couple of years. He wrote the screenplay with myself in mind and every once and awhile he’d send me the script as he was developing it and I’d read it. Unfortunately at that time he never had the finances to make it, but then one day he calls and says ‘hey, it’s happening and here’s the script.’ We were able to workshop it in a room with the other actors and develop it further before shooting. I play the role of Ray, a career criminal who’s looking for his last big score. He’s involved with a couple shady characters and one is actually played by my brother Frank. It’s an incredible Sci-fi thriller that plays with timelines, consciousness and it’s really a sophisticated interwoven script. I got to work the character and the director is very open to working in an osmosis way, which is my favourite way to work. True Fiction is quite different from Volition in the sense that I’d been part of discussions with Volition for a long time versus True Fiction, where I woke up to an email from my agent telling me to read the script. They’re interested in me and I need to answer by 4 o’clock. It also shoots in Calgary for 5 weeks. I read the script and thought it was extremely challenging. It’s a two hander, so basically myself and this wonderful actress, Sara Garcia. We’re in a house and I play a reclusive horror novelist who has writers block. An assistant is sent in to help me and that’s when all hell breaks loose. I do some experiments on her and things go sideways. It’s a horror film but it’s also very psychological. It was a very different character than the career criminal in Volition.”

“You co-produced and star in the film Daughter, it sounds like an emotionally charged film. Is it more difficult to shed that type of character after a film?”

“It’s interesting that you ask that. I’m a father of two beautiful boys and it’s a story of a grieving father that’s lost his daughter. This was a profound experience, Anthony Shim (acting instructor at Railtown Actors Studio) had written the script and we’d done readings of it. A lot of the cast is former or present Railtown actors.  The development of it was very nurturing and collaborative because the subject matter was so intense, it became important to be surrounded by kindness and people that cared about the subject matter. There are some beautiful actors in it, including my real life wife, Jenn MacLean-Angus who’s an incredible actress and plays my wife in the film. Teagan, Gabrielle, Camille, Jordyn and Ryan brought so much to their role. I can’t wait for everyone to see their work as well.”

“What is it that attracts you to a film that makes you want to produce it?”

“To produce an independent feature I need to be invested emotionally or really love the material. Producing is hard, it’s really difficult and I’ve worked with a couple other really great producers as well. I produce because many times I feel like the project won’t get made. If I feel particularly strong about a project I’ll get behind it. In the last 5 years I’ve really been thinking about what I want to leave behind. It was a conscious effort from me to step away from TV for awhile and focus on stories that I really cared about.”

John Cassini added, that he is not technically walking away from TV and to clarify, he has a new series on FOX called NeXT that will start shooting in the fall and he’s looking forward to being part of it. It’s a very interesting concept in which Artificial Intelligence is watching everyone, collecting data and we don’t know how far will it go; what’s NeXT? It has an incredible cast and he’s very excited to be part of it.

“Having been in so many films/productions, have you developed a method for auditions?”

“I’m a big fan of self-tapes. You can bring some breath and some calmness to the process of developing a character under such a short timeline. I’m a big fan of developing a character through osmosis. I’m not a huge fan of auditions but it’s necessary and part of the business so you have to embrace it. I try my best to bring what I have rather than an idea of what I think they want, cause I think you can get in trouble that way. I’m a fan of self-tapes because you can do them when the kids are asleep and I have a good self-tape area set up in my studio.”

“Are you a big advocate for rehearsals?”

“If it means running the scene over and over again, not necessarily. If it means exploring different avenues of the character in the given circumstances and showing up on set feeling a little more entitled to carry that role with you, then yes. You’re connected to that role because you’ve experienced things and performed exercises on aspects of the character that is outside the actual script.  You’re trying to create a full life that’s before and after the screenplay rather than just what’s in the screenplay. I think every actors job is to reverse engineer all of the choices that are written in the script and make personal justifications for them/personalize the work. That is one of the most fun parts of creating a role. Sometimes the more extreme and distant the character is from you and your real life, the more fun it is. You’re finding the empathy, the compassion and the humanity that allows you to justify something looked at by society as heinous or terrible. As actors, we cannot judge our own characters.”

“I’m still connected to the old school actors, so I’d love to work with Pacino, De Niro, Meryl Streep, Daniel Day-Lewis, I love those actors. I’ve met some of them, which has been awesome but to share some screen time with them in a scene would be great. It would definitely be on my bucket list.”

John Cassini is a force. He should be in your next feature film just so you can have bragging rights and star quality.  He raises the bar every time and is first class all the way!